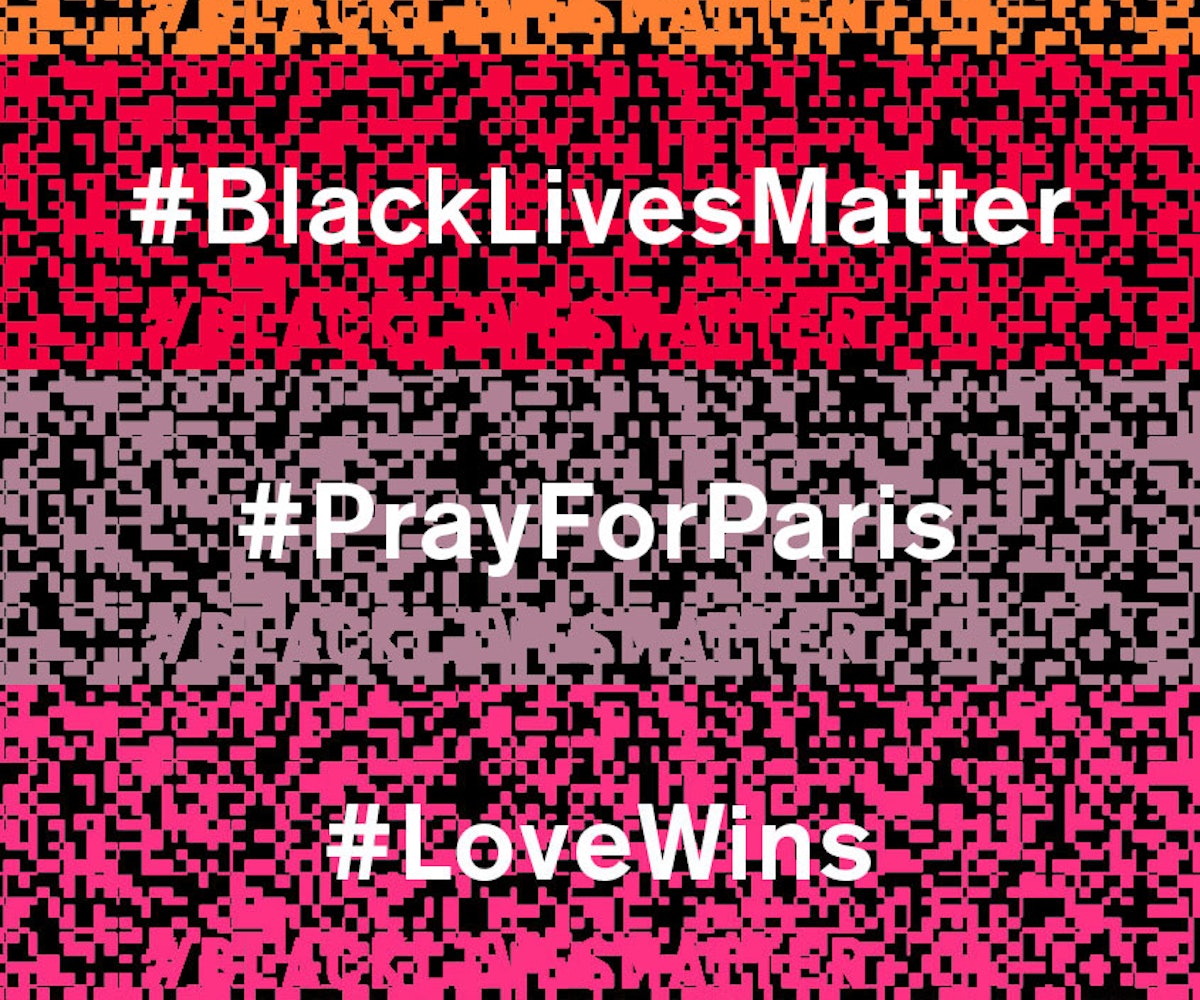 The year 2015 is only days behind, yet its powerful mark still remains on the public, cultural landscape. Twitter, in particular, was a medium through which movers and shakers and everyday-ers shared their voices on the things that matter (and some that don’t). The year 2015 proudly declared that #BlackLivesMatter, demonstrated necessary support for accessible and affordable healthcare via #IStandWithPlannedParenthood, and celebrated marriage equality with a never-ending wave of #LoveWins.

It was a good year for Twitter, and 2016 is already demonstrating just how quick and current it is with serious hashtags like #OregonUnderAttack, #YallQaeda, and #VanillaISIS, which skewer the “Protester” story that too many publications are trying to sell… like this amazing hub of news. The real tea is that if they were black or Muslim, they’d all be dead…but that’s a different conversation.

It’s not all work and business, though. Twitter gave the working masses in this country an opportunity to collectively groan as they headed back to work with the hilarious, albeit slightly bummer #BackToWork. And of course, Twitter was lit on basically any and all 2016/New Year hashtags, like #2016Goals, for like a whole day.

If hashtags were rings, this would be the one ring to rule them all. Created, along with a chapter-based, national organization, Black Lives Matter was led and coined by three powerful women activists. Patrisse Cullors, Opal Tometi, and Alicia Garza were the forces behind the tag that ascended to Twitter royalty, and set it up as an “…online forum intended to build connections between Black people and our allies to fight anti-Black racism, to spark dialogue among Black people, and to facilitate the types of connections necessary to encourage social action and engagement.”

The tag went beyond Twitter and made its presence known across other dominant platforms like Facebook, Instagram, and Tumblr. Its message is simple, yet it is missed by so many in the world, from the well meaning, to the straight-up bigoted. It forced a society that likes to lie to itself to confront the racist realities that color its soil. It forced people to snap out of their post-racial America dreams, where all the yards are mowed and white picket fences are the fences of choice.

What really made the tag powerful, however, is that it continued to live on far after it was started. It remained on feeds throughout the year and onwards, teaming up with other monumentally important tags like #TamirRice and #SandraBland or #SayHerName. It has become a tool, which social media users may add to show that they support the collective movement, and, y’know, a country where our justice system isn’t grossly, statistically slanted. (Note: Numbers tend not to lie but ad hominem arguments against #BlackLivesMatter organizers and protesters tend to.)

The #PrayForParis tag experienced quite the complex dichotomy. On one hand, it served as a beautiful testament of love, solidarity, and support for a nation recovering from a brutal attack. On the other hand, it sparked (justifiable) controversy in that the United States as a nation, and the world as a whole, only seem to mourn white, Eurocentric lives.

At the same time people joined together for Paris, Beirut was dealing with the devastation of a suicide bombing that cost 41 innocent people their lives. This, and the media and public ignorance of other nations like Baghdad and Syria, led to a heated debate about who bore responsibility for the whitewashing of worldwide news, the readers or the writers.

This tag blew up when same-sex marriage was legalized in The United States. It was a tense day, as the country awaited the official ruling from the Supreme Court that would decide if love, other than heterosexual love, would finally be recognized in the eyes of the law, granting all of the liberties and rights attached to it. Upon the official announcement of the uplifting ruling, Twitter burst into a party of rainbows, screaming, and kissing.

This day was a win for equality fighters, both long-time and new, and was particularly enjoyable due to the fact that close-minded, angry, trollish people were now the ones who the law did not support… and they were plenty salty about that fact (I’m looking at you Kim Davis). Their online tears, anger, and sadness sustained gay people for days, weeks even.

It’s important however, to note that this victory did not and does not mean all is well. There is still a world of battles to be fought for individuals and communities across the queer spectrum.

Basically, every other day there was a One Direction-related hashtag trending 1st, 2nd, or 3rd, in the United States. It’s probably not possible for one human being to organize all of them. There are a few gems that stand out like #BodyShotsWithHarry, #NotAWig, #GrowingUpADirectioner, and #HarryDontLickAnything. Each comes with its own story that you probably already know if you’re a fan or even remotely interested in them.

I won’t even say words to try to describe this magical tag set. Please just read for yourself: #GrowingUpGay, #GrowingUpBlack, #GrowingUpWithStrictParents, and #GrowingUpShy.

You won’t regret it. (Unless you stumble onto troll posts, in which case you may possibly regret it.)

If you’re curious about the hard rankings of these tags check out Twitter’s official list. Then start thinking up great hashtags and maybe you’ll be on the list next year.