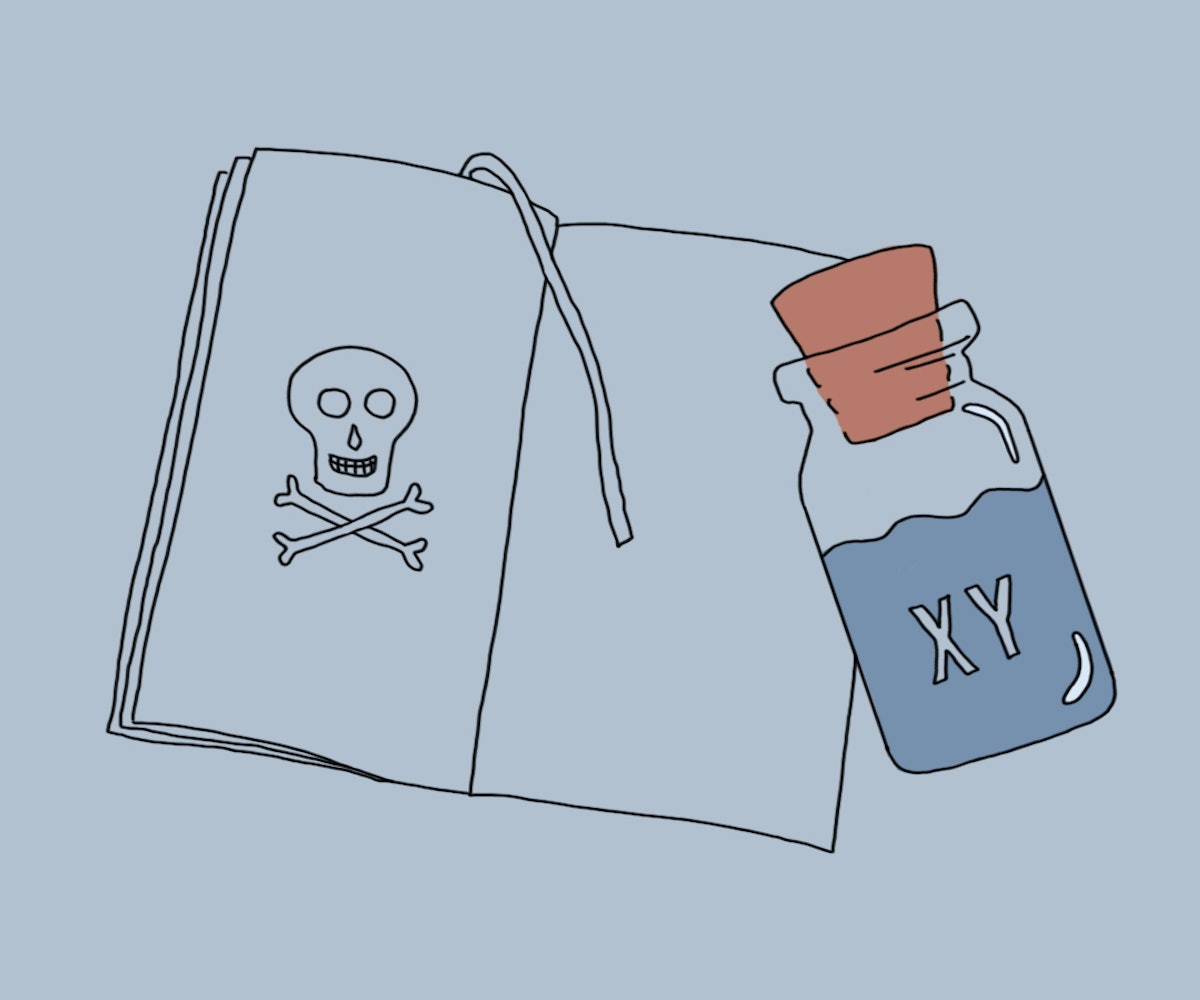 The fictional antihero is a celebrated part of popular culture; we crave the bad guy who is—we hope—secretly, privately good. Or even if he isn't good to or for anyone else, perhaps he will be good for us. After all, our popular culture is also littered with women who have tried to change the bad guy or girl, and turn them into the best version of their once-terrible selves.

And while it's certainly pretty to think that this sort of change is possible to make, the reality is that most toxic people are irredeemable. The best thing to do with bad people is just to stay away. This, anyway, is the best advice for real life, but what about, you know, pretend life? What about fiction?

It is through literature that we can get up close to the most toxic of men and then back away, unscathed. Protected as we are from these men because of their inherent, you know, non-personhood, we can observe them up close and learn about the depths of human depravity, perhaps better understanding why they behave the way they do and, most importantly, providing ourselves with the ability to recognize the signs of a truly toxic man so that we can better avoid them. Because, seriously, while we might be okay with wasting some of our time on reading about these guys, we have no space for their real-life versions in our lives. We're like, really busy right now.

Read on to see some of literature's most toxic men, so that they can stay on the page and out of your lives.

Yeah, so, on the one hand, I probably don't need to explain why a murderous, pedophile kidnapper is toxic, but on the other hand, a surprising number of people seem to think Lolita is a beautiful love story? I think it's because Humbert is superficially seductive because he a) keeps a journal and b) is European. But I'm here to tell you that neither of those things is the marker of a good man (especially the journaling thing; most male writers are nightmares to date), and in this case, uh, the whole pedophilia thing should serve as the ultimate warning sign.

Philip Roth's Alexander Portnoy is ultra-recognizable to anyone who has come of dating age in New York City; these guys are everywhere in probably every urban dating scene. You know the type: successful, neurotic, good-looking in a not so obvious way, obsessed enough with sex to make everything seem exciting and transgressive. Like I said: They're everywhere. But just because Portnoys abound, does not mean that they are harmless. Quite the opposite. These are the exact guys who will have you in therapy for years as you puzzle out how much you really meant to them. And the answer is always the same: not much. These guys care about two things, themselves and their mothers. You will never rate. Steer clear. If you don't, you'll wind up spending far too much time in sexual situations that you consented to without knowing the full depths of your guy's pathology, and ultimately the day will come when he's weeping with his head in your lap, whimpering, "Mommy."

Another familiar New York type is J.D. Salinger's Seymour Glass. You know this guy: He's the unemployed genius who latches onto a more successful (and always more attractive) woman and is able to convince her to be with him because she is the type of beautiful where she was never appreciated for her intelligence and so the second an objectively smart guy seems interested in her for reasons other than her looks, she falls hard. But here's the thing: The Seymours of the world? Are not interested in your intelligence. They're still interested in your looks. And, if they're anything like Seymour Glass, they're also a little too interested in hanging out with little girls. Plus, they're pretty fatally self-destructive. So stay away.

Yeahhhh... Patrick Bateman is terrible. I mean, he works in finance. Is there a more toxic profession? He also is a rampaging murderer who is into rat play and far too obsessed with Manhattan real estate to be any fun to talk to at a dinner party. And while most of the toxic men on this list are little more than archetypes, Bateman is all too real thanks to his current personification in the forms of Donald Jr. and Eric Trump.

I know that, as with Seymour Glass, there are people out there who have sympathy for Jay Gatsby. He was a self-made man! He did everything he did for love! He threw great parties! Uh, I guess. But also, Gatsby was a delusional narcissist who was full-on obsessed with a married woman he barely knew! And conspicuous consumption is not cool. Gatsby has too many shirts. Get you a guy who appreciates the work of Marie Kondo.

Christopher Dollanganger, Flowers in the Attic

Who wouldn't want to find love with a man who has known you since you were a baby and slavishly watched your every move, just waiting for the moment when you would reach sexual maturity so that the two of you could have a relationship? Oh, and who also happens to be your brother? Literally everyone, right? Right! (Right?!) Wrong. So wrong. Everything about this is so wrong! This V.C. Andrews book and its subsequent sequels are cultishly beloved because of how absurd they are, in that they glorify sibling incest as the height of romantic love, but I just want to remind everyone that no matter how good looking Nikolaj Coster-Waldau is as Jaime Lannister in Game of Thrones, you really should keep in mind that blonde brothers who are super into their sisters are, you know, pretty toxic.

Why is Mr. Rochester, who is the type of guy who keeps his wife locked away in an attic while he alternately seduces and rebuffs the governess of his young ward, thought of as a romantic type? Because people are fucked up and everyone has sympathy for a guy with a crazy ex. Break that pattern, though. Do not love Mr. Rochester. Do not love any guy who rants about his "crazy ex." You know who tends to have "crazy exes"? Crazy people. Stay away from crazy people who lie about having wives they've kept hidden away in the back of their houses. They're toxic. You don't need that.

A woman as amazing as Zora Neale Hurston's Janie Crawford deserves a hell of a lot better than Joe "Jody" Starks (and, don't worry, Janie gets it, although, you know, nothing's perfect, exactly), but Starks serves as an example of the kind of everyday toxic guy that so many women have found themselves with. You know the sort: outwardly respectable and perfectly charming to others, but also a total misogynistic pig whose own self-worth is completely tied up with the degree of control he has over his wife. If you ever meet a man who treats his women like property in the the way that Starks does with Janie, run, don't walk, the other way. It's tempting to want to feel like you might be taken care of, but no amount of stability is worth this type of toxicity.