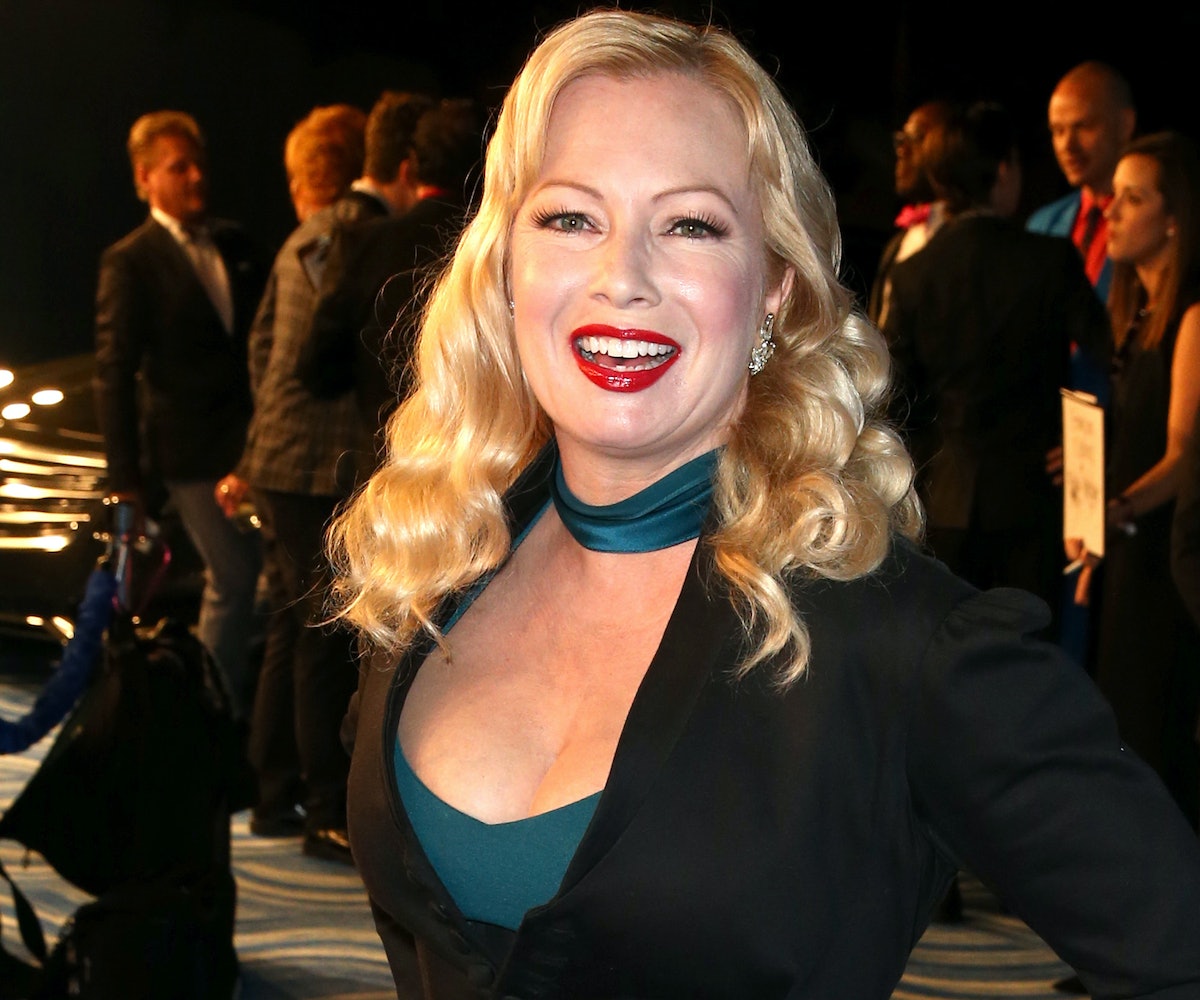 Metaphorically speaking, Traci Lords is ready to bare it all. After three-plus decades in Hollywood, the cult icon has seen it all and done it all—from writing a book to starting a clothing line to continuing her illustrious onscreen career as one of the fiercest actors around. And Lords’ latest role is as the ferocious Jane McKinney on Pop TV’s Swedish Dicks, a character she describes as “the slickest dick of all” the private investigators working in the business. However, when two Swedish detectives—one of whom is a washed-up stuntman and the other an ex-DJ—begin to encroach on her territory, and succeed in their own bizarre way, McKinney’s out for blood.

But Lords is far from the cold-hearted McKinney in real life, even if her self-described bitch face says otherwise. And though she eventually solidified herself as a cult icon thanks to her role as Wanda Woodward in John Waters’ Cry-Baby, Lords’ journey to stardom wasn’t easy. After moving to Hollywood in 1984, Lords began performing porn at the age of 15—becoming one of the industry’s most sought-after adult film actors. However, as she revealed in our interview and her best-selling autobiography Traci Lords: Underneath It All, she was “basically sex trafficked,” despite the “she liked it” rhetoric that’s dogged her for the entirety of her career.

In honor of the Season 2 finale of Swedish Dicks, we decided to chat with Lords about playing a cold-blooded PI, the impact of #MeToo, and everything in between. Read our Q&A, below.

How did you prepare to play this really antagonistic and, as you say, "out for blood" character?

It's comedy, so it's not all that serious. We have some amazing writers on this show, and Jane’s got some incredible one-liners. It's all good fun. That's the difference between, of course, preparing comedy or drama as an actor. You're not channeling your inner demons or anything to do comedy. Comedy's all about just rhythm, and a bit of a resting bitch face, which I don't have a problem with.

But how did you channel the inner boss bitch for this particular character?

That wasn't actually all that hard for me, because I've been there myself. I'm not Jane McKinney. She is definitely an extension, obviously, but there are things about her that aren’t all that difficult. I feel like I'm very much somebody that likes to be in control of situations. I like to be a leader. I like to be the best at what I do, whatever it is. It was just really blowing all those feelings up and becoming, like, a bit of a super-version of me.

It's what we wish we could do in real life. Like, where we have no filter, so we can really tell our coworkers what we think instead of being nice about it. Jane's not really nice about things. She thinks something that you're wearing sucks? She'll tell you. But she'll do it in a way that you don't quite know. She's clever that way, but it's always like there's a reason for everything that she does. That was a treat for me. I got to go to work and, I don't know, be deliciously unfiltered.

Did it remind you of any similar roles that you had previously taken on?

No. The beauty about Swedish Dicks is I've been describing it as a cross between Fargo and a John Waters film. It's set in the underbelly of Los Angeles—the not so glamorous part, back alleys, and side streets, and Koreatown. It's not Hollywood glitz; it's Hollywood working class, which is cool. You don't see that a lot in the movies. But it's a fun place to visit.

Speaking of John Waters, is it funny having the films you’ve starred in cited as stylistic inspiration for a lot of younger filmmakers? Especially in terms of this new wave of seedy, campy film?

I think any excuse to do something in that genre is something I'm always happy to do because I love those worlds—whether they be the land of Gus Van Sant or David Fincher. People that inspire me, they really create specific worlds. You read their script or you look at their film, you know right away—or, at least I do. I know whose work that is. I think that’s a true talent and that's amazing. For people to compare Swedish Dicks to John Waters-meets-Fargo, I think that's a huge compliment, because, to me, there's no one like John Waters. He is truly an original, and he's done such incredible work.

I wanted to talk to you a little bit about your activism, as well, and your work with [anti-child prostitution organization] Children of the Night. Can you tell me about how you got involved with them, and if you’re working on anything else with them?

I met [founder Dr. Lois Lee] at some point in the late ‘80s and did some PSAs for her organization to bring visibility to the fact that she was working to help street girls find a safe haven. She had the shelter, Children of the Night, and she would take these teens from the streets and rescue them from sex trafficking—back before it was really hip or even a term. Over the years, I have helped her by showing up at various events to bring awareness and help with the fundraising, et cetera. Other than that, I don't want to take credit where credit is not due. I haven't done a whole lot with Children of the Night as of late, because quite frankly, I have my hands in all these different pots. Lois has got incredible volunteers and hasn't really needed the assistance.

I think that it is an incredible time that we are living in. I think that it is incredibly inspiring to see people rise up and say, "This isn't okay. It hasn't been okay for a very long time, and we're not going to allow it to be okay anymore." I am absolutely totally blown away by that. It's shocking that it's taken so long to get to this moment in time, and I am absolutely thrilled that we are here.

Just in terms of the fact that we are living in a world where it's no longer okay to blame the victim and turn around and say that these women were asking for it, or whatever. Because [perpetrators are finally] being held accountable for their actions.

The real conversation is why has it taken this long? It's something that has had me baffled for 25 years. You have to remember, I was a 15-year-old girl that was basically sex trafficked myself. People like to make that glamorous, and over the years I have been subject to comments from people saying, "Well, she was all on board, and she loved it, and when the cameras stopped, she kept going." It's the same thing—the victimizers making the victim look like they were these insatiable sluts that got what they wanted. So I'm so happy that people have to be careful before they grab you on the ass and tell you to "go sit over there, sweetheart." Those days are gone, and that's fabulous. The feminist in me is just screaming with joy.

I have to tell you, this is the end of the press tour, and what I've noticed happen, is that this is the very first time that I've worked with incredible journalists and had a positive experience with the majority of them. I've done incredible features with all the fashion magazines, the biggest magazines in the world throughout my career, right? This is the very first time on a press tour I see the difference. They are so afraid.

The journalists, the radio DJs, you really see it. These guys with that overblown male humor, they want to poke fun at things, and most of the time it's not necessarily mean-spirited, but it's not in great taste. They don't have a problem being dirty and just off-color, and just rude and inappropriate, and insulting—sexist. With this tour, I just noticed that that's not there. All of a sudden, you can see them choose their words much more carefully. They're afraid. While I am 100 percent behind freedom of the press, at the same time I'm not 100 percent about being able to be a bully. Or being able to say whatever you want online about a public person. If you've got the balls to come out and say something incredibly inappropriate to anyone, well then you'd better be able to stand there and take the response, right?

One of the things that I've found frustrating is that [as artists] we're supposed to stand there and allow our critics to speak freely about ourselves. That's nonsense.

I'm glad you feel like you can speak up and that you’re feeling this palpable change. Especially since you've had such a storied career—it’s just a shame it took so long.

Absolutely. I'm wondering what other experiences women are having. I want to hear about more of those conversations because if it's happening to me on this level, I wonder where else it's happening.

The root of this is that we've been so conditioned to not make waves. I remember just coming from the world that I came from as a kid, being a 19-year-old and saying, "Okay, I have my first real agent in Hollywood, and you know what? I need to keep all of my clothes on because my tits are too much of a distraction. They can't handle them." But it was like, I did this in my past—but it's my past. If I ever feel like I want to do it again, it's going to be on my terms and I'll do it myself.

Of course, that was in 1987, and I never did it again. The reasons are perhaps different than what people would think that they are. My reasons for it was because there's just this weird disrespect that happens with... Sexuality is not something that is in any way handled well in America. All the shaming, all the stuff that goes with it, it's almost like you have to apologize for... my god, if you like sex.

Swedish Dicks Season 2 is available to watch via the Pop Now app.

NEXT UP
Entertainment
Shania Twain's "Waking Up Dreaming" & 9 Other New Songs Out This Week
Entertainment
Who Will Rihanna Bring To The Super Bowl?
Entertainment
Netflix's 'Dahmer' Criticized By Victim's Families
Entertainment
Hailey Bieber To Open Up About Her Marriage On 'Call Her Daddy'