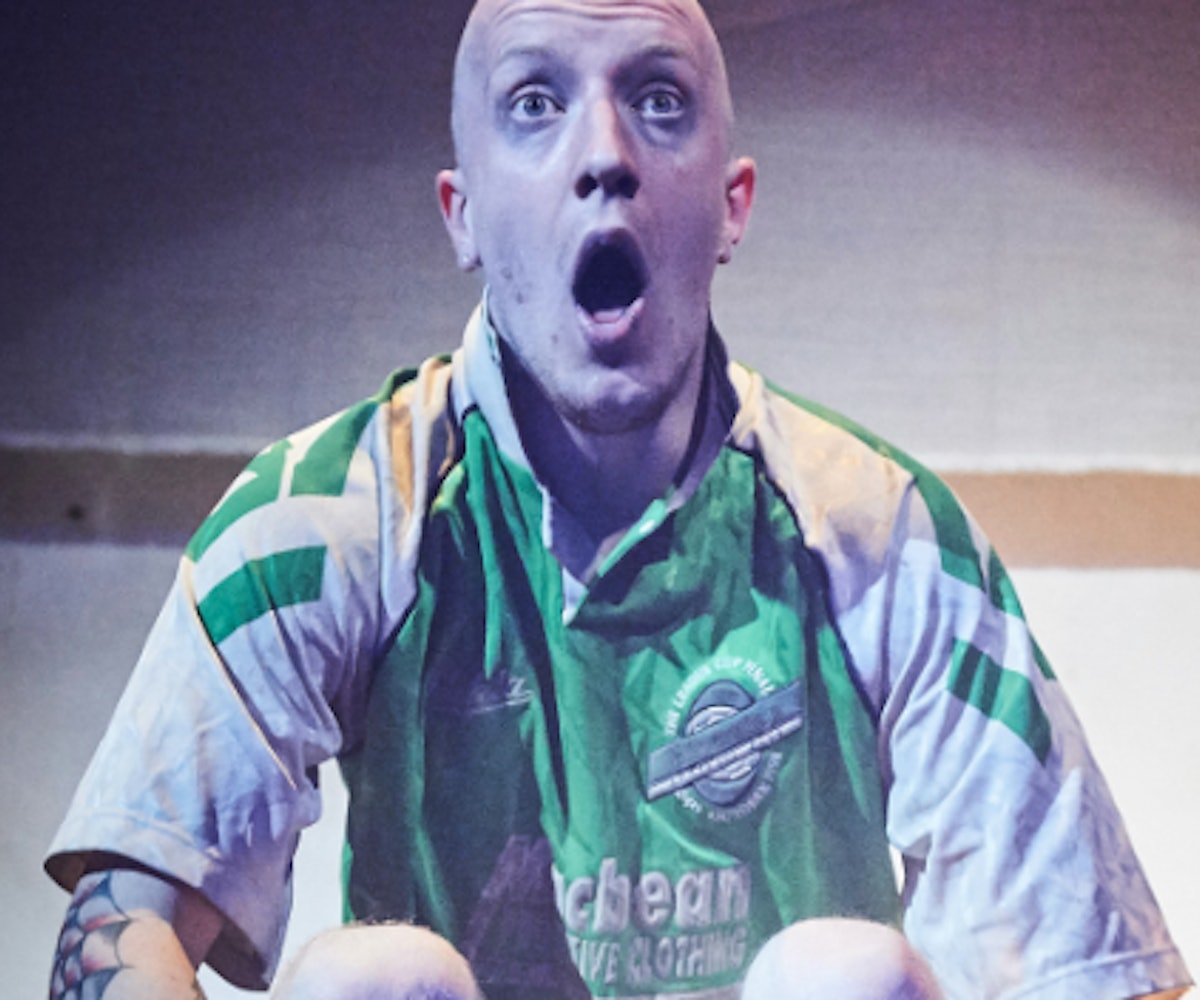 I'm not sure what, exactly, would compel someone to voluntarily sign themselves up to get splashed by a feces-ridden toilet, yet somehow, there I was—front and center, overwhelmed in the midst of a literal shitstorm of fake poop and sweaty balls. Just as dark, dingy, and decrepit as you’d expect it, Trainspotting Live—based on the iconic '90s movie and book you know and love—is an immersive theatrical performance that plops you right in the middle of an ‘80s Edinburgh heroin den. Yet, despite the initial thrill of seeing Mark, Sick Boy, Begbie, and Tommy come to life before your eyes, Trainspotting Live is definitive proof that medium matters.

Adapted by Harry Gibson and originally performed at London’s King’s Head Theater by the Edinburgh-based In Your Face collective, Trainspotting Live is a raucous, ridiculous, if rambling 75 minute-long ride. Granted, we still have Mark Renton and his group of friends to cling to, but they’re admittedly hollow shells of their former selves.

Of course, when you're presented with the opportunity to adapt such a visceral story for a live audience (the "Worst Toilet in Scotland" bit obviously made it in), it's easy to get carried away flinging around shit-stained sheets and rubbing your crotch on the faces of audience members. Unfortunately, this is precisely where this particular production trips up and falls flat on its face.

Sure, one could argue that it "breathes new life" into the characters and that half the fun of an adaptation is taking some creative liberties with the story. But in Trainspotting Live's case, when you strip away the cheap shots and gross-out gags, what's left is a shell of Welsh's story that only seems interested in sensationalizing the legacy of its characters.

At its core, Trainspotting is a story about desperation, alienation, and the way these things can ensnare a person to such a debilitating degree that all you can think about is your next hit. But rather than reiterating this message in a meaningful way, we're reminded that, while it's easy to craft a story that glamorizes addiction, it's a much harder task to craft a nuanced look into the horrors of the disease that doesn't border on exploitative—especially when it's so easy to rely on IRL gags. But for anyone who's been or loved someone in the throes of addiction, it's unsettling to watch a gleeful audience laugh along with antics that you know are the result of a pained and troubled existence. It's unintentional, but it's undeniable that there's a distinct aura of voyeuristic othering thanks to the production's reliance on shock tactics and abrasive, in-your-face antics for laughs.

Again, what made Welsh's novel and Boyle's film such impactful works weren't the exploding toilets, the raves, or "authentic" Scottish dialogue, it was the underlying story of a group of friends bound together by the tumultuous high-and-lows of a sickness that forces you to just try and keep shit from exploding in your face. And I don't mean literally. After all, being entertaining was just a side effect of the story's dark humor and hallucinogenic sequences. But without the presence of the more relatable and universal aspects of its previous iterations, Trainspotting Live is a disappointing experience for any hard-core fan who loved Sick Boy, Begbie, Tommy, and Mark as people.