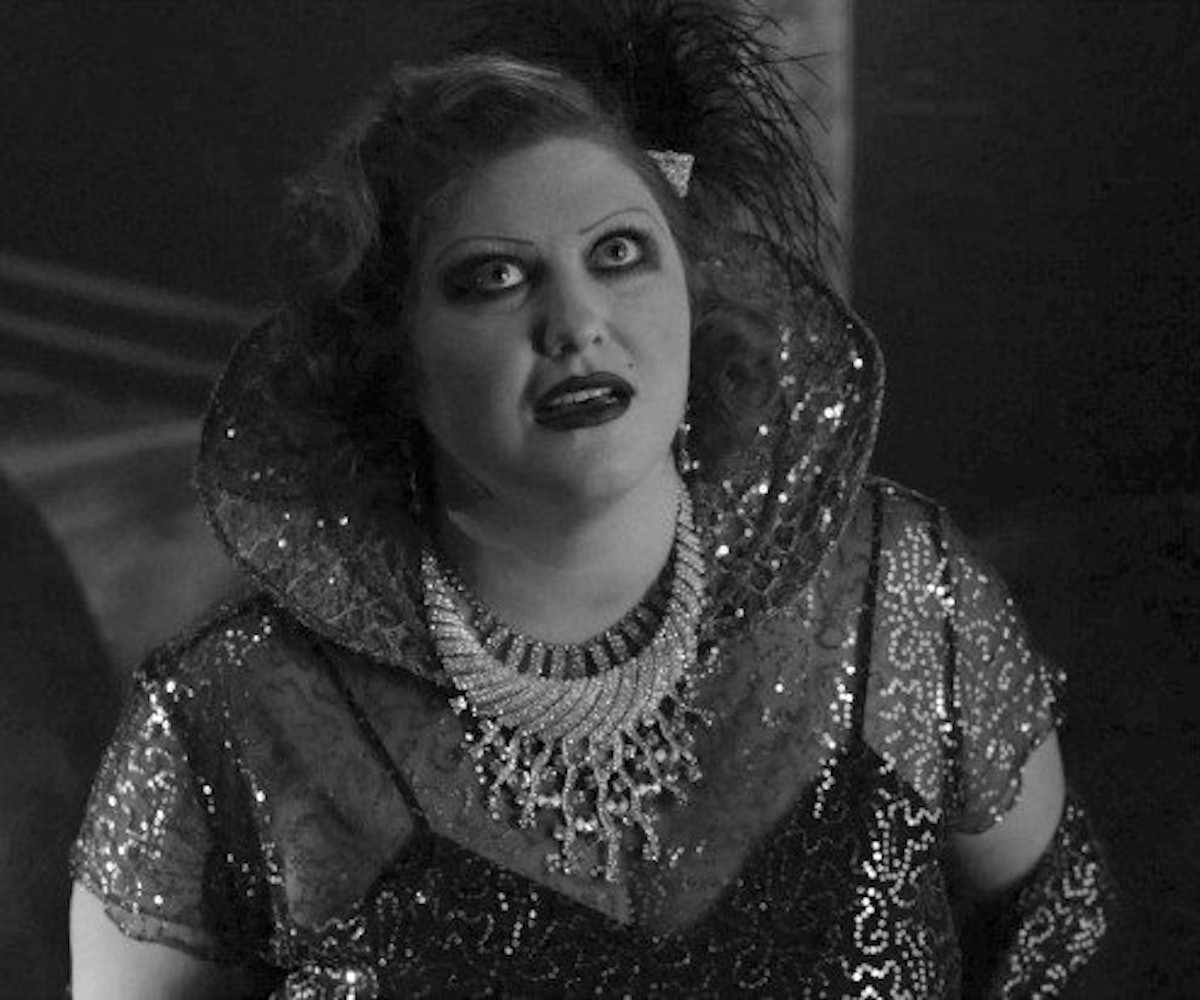 David Lynch was born in 1946. In the already fabled eighth episode of his new Twin Peaks, an atomic bomb is being tested in the New Mexico desert in 1945. Lynch slowly takes us inside a mushroom cloud and lets the screen dissolve into particles of light and shade, as in a non-narrative film by experimental director Stan Brakhage. But then we start to hurtle toward something as if we are moving through inner space, a shot that seems to be a direct quote of one toward the end of Stanley Kubrick’s 1968 film 2001: A Space Odyssey. (This is unusual because Lynch almost never references other filmmakers.)

We move across the wine red sea that Kyle MacLachlan’s Agent Cooper saw when he was escaping from the Black Lodge in episode three, and then the camera tilts slowly up to a sort of fortress. We slip inside this fortress via a keyhole slot, and what we see inside is the serene Senorita Dido (Joy Nash) sitting in an art deco-style room in black-and-white while the prophetic Giant (Carel Struycken) stands at attention. This fortress seems connected to an old-fashioned movie theater where the Giant looks at the mushroom cloud on a screen.

Senorita Dido does not speak a word, but her presence and her look feel very significant. She has penciled-on eyebrows that are redolent of the 1930s, but her eye makeup and beaded gown evoke the 1920s (this is an outfit that Gloria Swanson might have worn in one of her silent starring vehicles from that decade). Visually, she is standing in for a time period before the dropping of the atom bomb, and her demeanor is maternal and kindly. She plants a kiss on an image of Sheryl Lee’s Laura Palmer, and this has a general emotional impact that is close to that great scene in Lynch’s Mulholland Drive (2001) where Rebekah Del Rio sings Roy Orbison’s “Crying” in Spanish.

Lynch’s languorous rhythms in this 2017 return to Twin Peaks are meant to break down our defenses. He knows that we can’t be moved and we can’t be scared by standard narrative means anymore. It is only when we give ourselves over to the uncanny and measured atmosphere of an artist like Lynch that we might cry or be frightened, and there was plenty to be frightened of in this eighth episode.

Lynch likes to mix things up tonally and get us to think about our reactions. So many films and television series tell us exactly what we should be feeling and thinking, but with Lynch, we are often in a gray zone. We are caught between laughter and tears and fear, and not in succession, but all at once. Lynch’s FBI agent Gordon Cole has a poster of a mushroom cloud on a wall in his office, but he also has a photo hanging on the opposite wall of author Franz Kafka, and that photo of Kafka seems to me key to understanding Lynch’s bewildering point of view in episodes five through seven. In Kafka’s novels and stories, there is an all-pervasive dread that is also somehow comic at the same time.

Take, for instance, a sequence in episode six that I have not been able to get out of my head. Harry Dean Stanton plays Carl Rodd, the owner of a trailer park. At 90 years old, Rodd says that he has little to do but wait “for the hammer slamming down,” but he also brags that he has been smoking cigarettes for 75 years. Stanton is a performer who seemed old even when he first started working in movies 60 years ago, and he is the least sentimental old man screen presence imaginable.

Stanton’s Rodd sits on a bench in a park and looks up at the trees for a time, and he smiles at a mother and son playing around together. Lynch crosscuts this park scene with images of the villainous and drugged-out Richard Horne (Eamon Farren) driving in a car at a dangerously fast speed. The little boy is mowed down by Horne’s car in a way that feels faster than we might expect, and the aftermath of this killing counts as one of the strangest things Lynch has ever shot (and that’s really saying something).

He cuts to reactions of bystanders at the scene, several of whom cover their faces with their hands in ways that feel deliberately and uncomfortably clichéd. What should be a tragic moment starts to shift almost instantly into a consideration of human inadequacy in the face of such an event, and the thing that really stings here is that this inadequacy is somewhat comic. Even Kafka might have hesitated over portraying something like that.

Rodd approaches the grieving mother and just looks at her with his bone-dry, staring face. He sees the boy’s spirit ascend up into the sky (an effect that looks homemade, like something from a silent film), and he tries to offer the mother some comfort. But this doesn’t quite work, mainly because he is such an obvious survivor—a man who has smoked cigarettes for 75 years—whereas this woman’s little boy was brutally squashed like a bug. It isn’t fair. And somehow it feels as if Lynch is suggesting that God laughs at our pain, or maybe God just feels inadequate in the face of it, like those bystanders.

Lynch’s own relation to expressions of extreme emotion can be seen fairly clearly in the scene where the upset FBI agent Diane (Laura Dern) reaches out for Lynch’s Gordon Cole physically and he reacts stiffly, as if he wants to help her but can’t. This is also a complicated and layered moment because Dern is playing in a heightened and passionate style that is very different from the style of all the other actors, but Lynch’s own style is eclectic enough to handle that. In fact, this new Twin Peaks seems ready to handle just about anything, and that’s what makes it so exciting and so unsettling.

Dern’s Diane and Naomi Watts’ wrought-up wife Janey-E are providing the “tough cookie” counterpoint to the victimized girls in earlier episodes, as if Lynch is suggesting that if a woman is going to survive in this world she has to get tough as nails. As a visual enforcement and encouragement of this, Dern has never looked more strikingly beautiful than she does with the platinum blonde bob she wears here, and this feels like a gift of love from her director.

In many ways, Lynch is building on the most classical cinema styles, from the crosscutting of D.W. Griffith to the manipulations of space in Alfred Hitchcock films. There’s a scene in episode six where Ike “The Spike” Stadtler (Christophe Zajac-Denek) murders a woman with an ice pick in her office, which is depicted in its full goriness. Another woman walks into the office and sees what has happened, and Ike pursues her outside. Lynch keeps his camera behind a door so that we don’t see the second murder but can only imagine it, and this decision is pure Hitchcock.

Lynch is on the level now of those major directors of the past. To my mind, the two best American films made in the last 40 years are Lynch’s Mulholland Drive and Terrence Malick’s The Tree of Life (2011), and in episode eight of this Twin Peaks, we have Lynch going into the same “visual exploration of matter” scenes that made up a large part of The Tree of Life, but these are done from his own, bent point of view. He perceives so much evil and anger in life, and this comes across particularly in his unnerving sound design, which makes use of music but also of horribly un-place-able industrial hums and throbs that play menacingly throughout whole scenes.

There are many things that I cannot cover in an overview like this, but I’m still disturbed by the extended shot of Amanda Seyfried’s face in episode five where she is ecstatically on drugs, but her life is clearly going nowhere fast. And there is unadulterated humor here in the scene where Dr. Jacoby (Russ Tamblyn) offers a hyped-up, evangelically angry, and vaguely nonsensical monologue to his internet fans.

As blogger David Cairns has pointed out, this new season of Twin Peaks takes place in a world where no one ever seems to retire. Stanton is still running a trailer park at age 90, while 87-year-old Don Murray, who once starred with Marilyn Monroe in Bus Stop (1956), is still the head of an insurance firm where MacLachlan’s savant-like Dougie/Agent Cooper is employed. Some people online have complained about all the Dougie scenes, but they have started to work for me on that old David Letterman principle, that if you keep repeating a lame joke it will start to be funny, and then it won’t, and then it will again.

Until all of the 18 episodes have been seen and digested, it’s very difficult to make even semi-firm judgments on this Twin Peaks. Surely, it will be shown as a marathon in repertory theaters in the coming years, and episode eight is going to look even better and more frightening on a huge screen in a darkened theater. It’s folly to try to judge a Lynch film or series as just one thing or another or to try to nail him down to one point of view. What he is creating here is a world. And a world is full of contradictory things.

NEXT UP
Culture
Allie Rowbottom’s Novel Aesthetica Isn’t About Instagram — It’s About Survival
Entertainment
Precious Pepala Is Going From TikTok Covers To Her Own Resonant Songs
The Art Issue 2022
From Renaissance To Gemini Rights: The Stories Behind 2022's Best Album Covers
Entertainment
Olivia Rodrigo Hinted At New Music In 2023