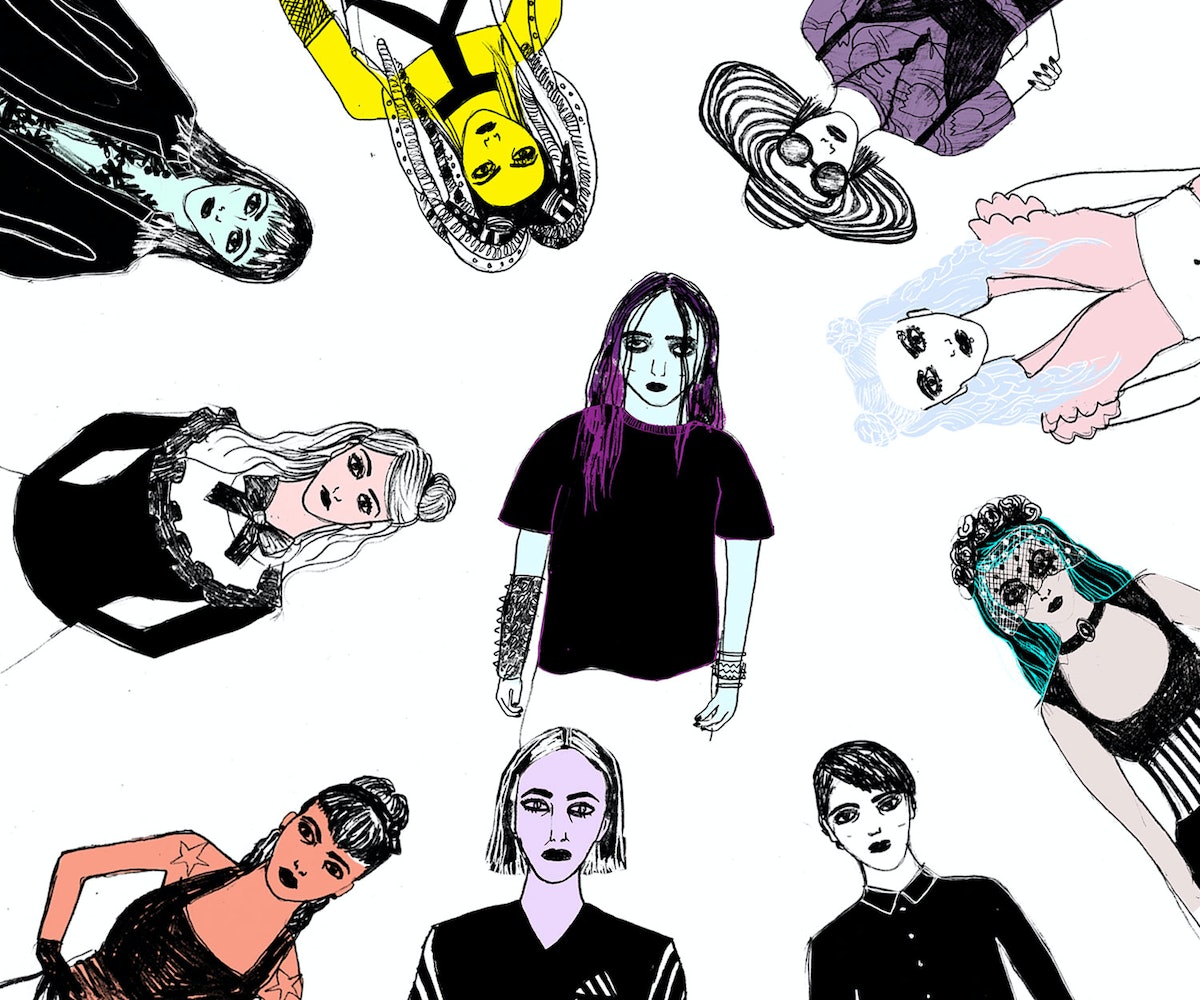 Illustrated by Liz Riccardi
by Hayden Manders and Yasmeen Gharnit
May 22, 2016

Before "goth" even became a label, the idea of embracing death, mortality, sadness, and other "dark" realities in life was long reserved for creative, tortured geniuses. Artists like Edgar Allen Poe and Mary Shelley were revered for their work, but were ultimately misunderstood. However, along with the age of rock music, that all changed.

With Alice Cooper and Bauhaus at the forefront of the movement in the '70s, there became musical outlets for the later-described goths, and places for them to convene and share ideas at shows. In the next few decades, the idea of goth began to evolve and different subsets emerged. From the mainstream goths to the Hot Topic goth to the Marilyn Manson enthusiasts and Trent Reznor devotees, there's no clear meaning of what goth exactly means anymore.

Check the gallery below to see some of the goth subcultures of today, and find out exactly which one you belong to.

You'd be nowhere without your black lipstick and Equinox. Mortality is real and always at the forefront of your thoughts, and you have to treat your body like a goddamn temple to escape it another day.

Cute, but dark, the Bubblegum

uses pastels and pale hues to contrast the inherent darkness they know to be true.

Melanie Martinez—Marina and the Diamonds'

Life is nothing without its imaginative escapes, monsters, and symbolism. And while you spend a lot of your time doodling in your sketchbook and contemplating the purpose of it all underneath a bare, dilapidated tree, you make sure to spend at least 14 hours of the day running about pretending you're the protagonist in a highly marketable, but no less meaningless movie.

grew up feeling more Hot Topic but dressed in Abercrombie & Fitch. Once they grew out of that, they gravitated towards art house films, deep thinking novels, and pursued philosophy and fashion. They are the dark, but witty people you meet at liberal arts college.

The Lisbon Sisters, The xx

. You can still be

and be at the beach. Sure, there's the whole black in the sun thing, but whatever. You make your lifestyle work.

“Black is modest and arrogant at the same time. Black is lazy and easy—but mysterious. But above all black says this: 'I don’t bother you, don’t bother me.'" — Yohji Yamamoto

Goths have been around long before Hot Topic came along. Taking inspiration from the Salem witch hunts and Mary Shelley, the Victorian Goth would be nowhere without lace, Edgar Allen Poe, and a stiff upper lip.

What do you get when you mix rave culture with comic book hero-meets-Tumblr aesthetics? A cyber

Charli XCX when she first started

The "This Isn't Just A Phase, Mom" Goth

Not a girl, not yet a woman, you're somewhere between the ages of 12 and 19. You don't know what you want out of life, and you don't know where you're going, but you do know one thing: This isn't just a phase. If only your parents would stop bugging you about it...

A sub-genre of rockabilly, the gothabilly is all about asserting her sexuality, style, and affinity for darkness.

NEXT UP
Culture
An Ode To Stripperweb, The Beloved Sex Worker Forum
Entertainment
Ebony Riley's "Deuce Deuce" & 9 Other New Songs Out This Week
Fashion
Bottega Veneta Just Dropped The Next It Bag For Spring
Beauty
Hailey Bieber’s Bubblegum Pink Nails Are Channeling Spring
Style + Culture, delivered straight to your inbox.