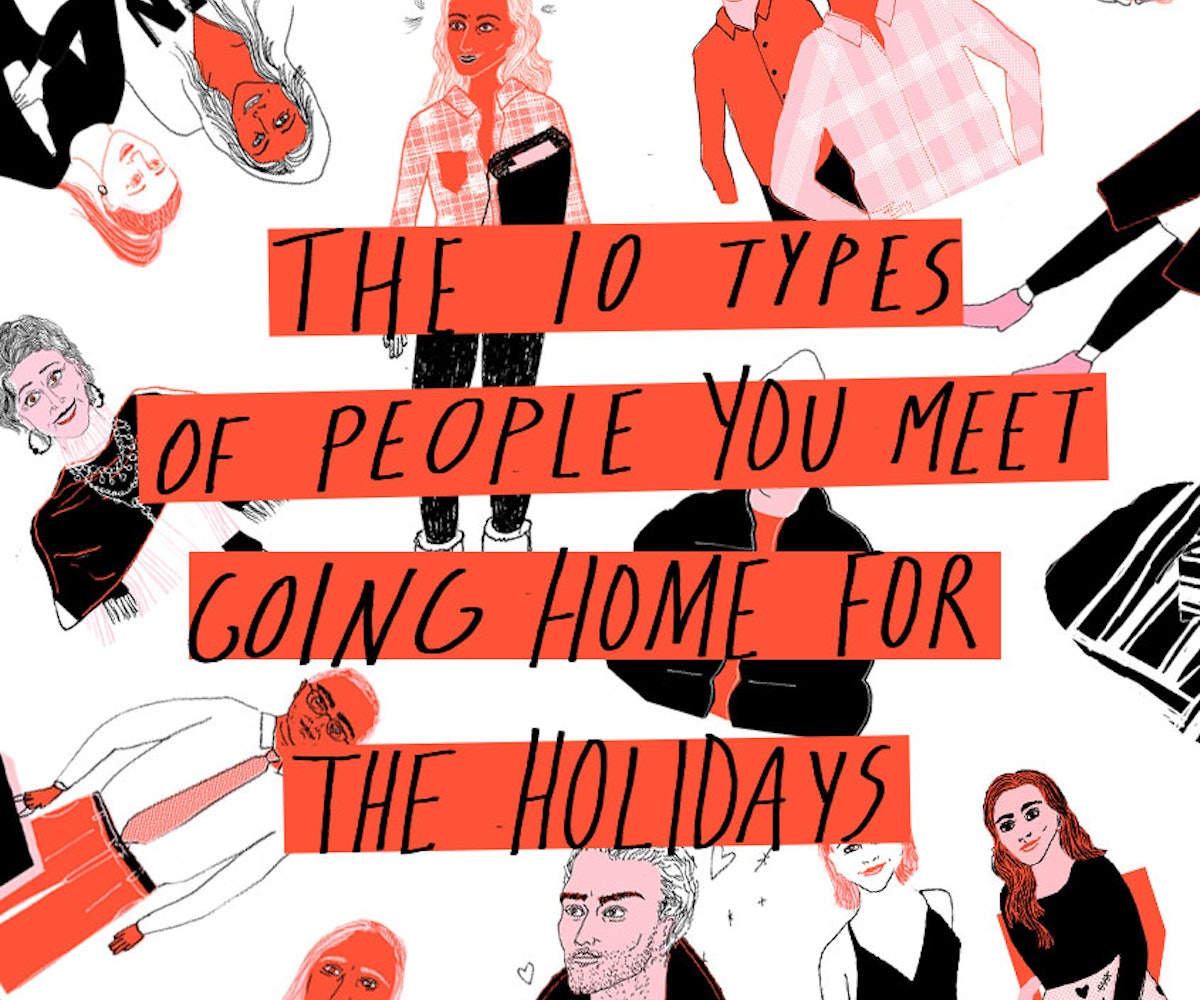 There comes a time in (mostly) everyone’s life when they must venture to their hometown. Some hold out for their high school’s 10-year anniversary, others shrug and treat the holidays like a mini reunion. Depending on how you fared growing up, the occasion can be a joyous one or one that elicits many an eye-roll, sarcastic shrug, and the occasional “Hey…you…” It’s an exercise in patience, modesty, and virtue, really. You thought you’d never see some of these people again when you graduated, but ‘lo, here they are, looking the way they do. We can’t tell you how you should react, but we can tell you who you will meet. They’re the archetypal characters lampooned in raunchy teen movies and smartly written adult comedies. Hell, you’re bound to meet a few when you turn on those good, ‘ol family holiday movies, too.

Your life is not a movie, but the following 10 kinds of folks make it seem like one.

There she is! Still pretty, still a little aloof, and ready to remind anyone and everyone of her high-school title at any time. Once a prom queen, always a prom queen…and usually a little basic. Congrats on your win, girl.

The One That Got Away

Ugh! You’ll run into The One That Got Away at your most inopportune moment; e.g., a sudden grocery store run for your parents, after the gym, picking up your pet’s poo in the road, or at some local bar when you aren’t wearing that freakum dress. Your heart melts and memories of the people you could’ve been flood your brain. “Hello,” you say. “Hello to you,” they say back.

We can’t speak to your individual friend group, but we can tell you that they rule. Now, you can hit the town and not lie to your parents about where you’re going. The “sleepover” excuse is irrelevant at this point in the game. Cheers to not sneaking alcohol under your parents’ noses anymore. Adulthood kind of rules.

Everyone has that mom who fawns over you more than they do their own kid. You never invited this kind of attention, it just sort of happened. Whatever. Well, that super-eclectic mother hasn’t stopped loving you after all these years. The only difference is she’s pushing wine and cheese in front of your face rather than Wheat Thins and soda. You know you’ll never be hungry or thirst under her watch. (Though the cheek pinching could stop…)

Ah, the first job. The one you left when you moved away and promised yourself the next time you seek employment, it will be career-oriented and not just to cover gas. When you return home, though, and make that journey into your former hometown job, don’t look so surprised that your boss is still there with a feigned smile on their face. They mean well and just want to see you succeed. It’s because of them you know how to at least deal with rude customers. Say hello.

You know, that group of guys that did everything together? They dressed the same. Well, they still dress the same and act like they did in high school. Yet they’re still oddly attractive...? One of them definitely has a Dave Matthews Band T-shirt in his rotation. Hell, he might even be wearing it underneath that gingham shirt he wore to that house party you didn’t want to go to, but your BFFs said it was the only thing happening, so...

They’re like Tha Boys, only girls. These girls were the super-popular ones. They’re all doing well, forged identities for themselves, and are a healthy mix of happy and complacent. When they’re together, though, they act like no time has passed (even though it’s clear to any outsider it has) and sip those Mike's Hard Lemonades for #oldtimessake. Oh, and #selfies. It’s still their thing.

The One Who Moved To The City

There’s always that one person from your hometown who moves to the Big City and acts like they are just so metropolitan. They talk about hip things while complaining the beer at that party isn’t as good as that micro-brewed one from that bar in the city. They love to regale stories about knowing a bouncer at a club, having dinners paid for, and that vintage shop they just love. It’d be nice if they made eye contact with you, but they keep their sunglasses on at all times.

The One Who Still Lives With The Parents

Hey, it’s okay to shack up with the parental units. Hollywood has, unfortunately, made this archetype out to be that person who loved their drug-rug hoodie and had Bob Marley posters hanging in their room. (Well, Bob Marley and Grateful Dead posters.) They live in a beanie and always smell like incense. They’re super-chill, though, and nice to talk to at a party.