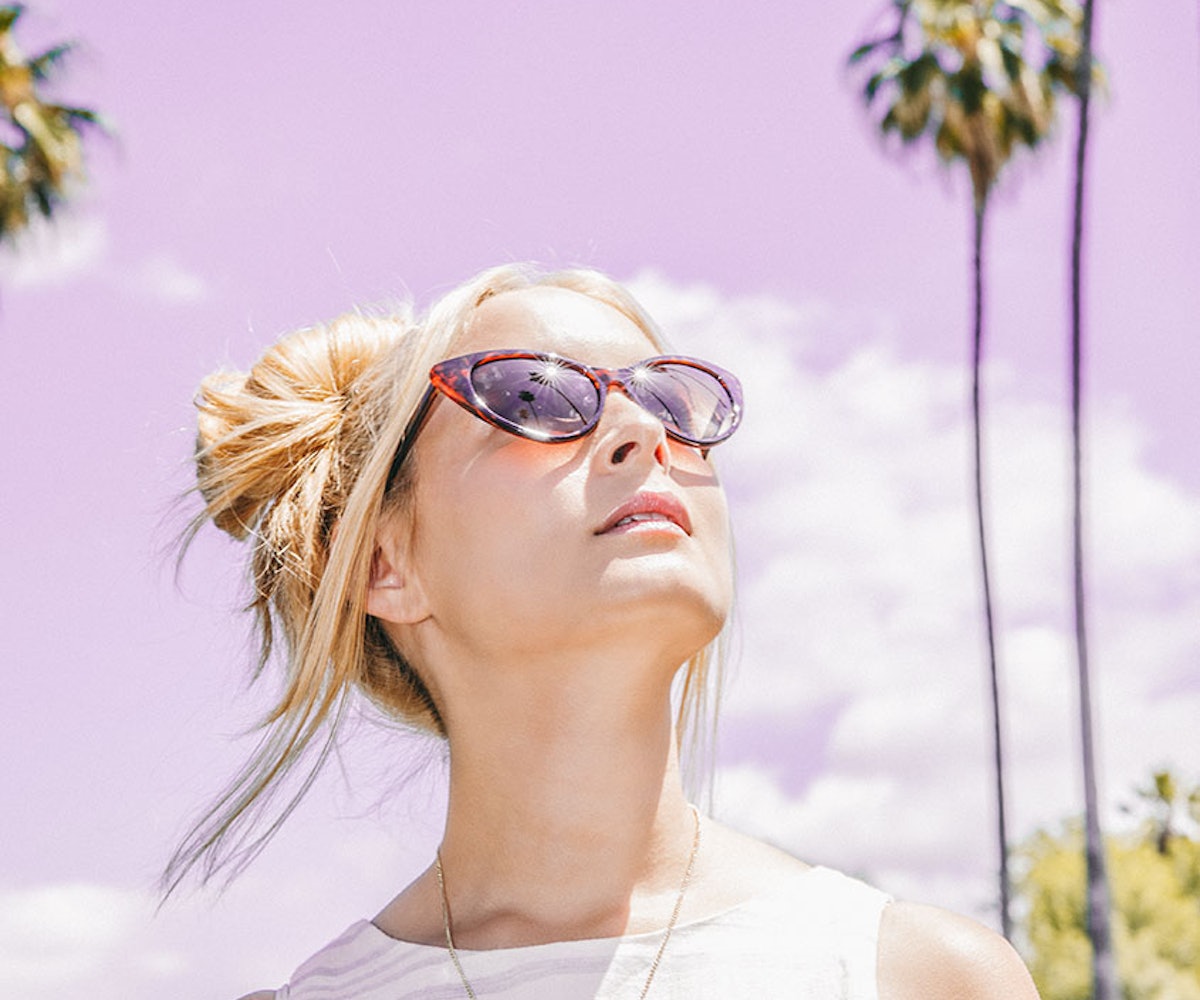 "There will always be haters, but they don't bother me," Mark Briscoe tells me coolly. We're sitting in his office at Rosweel, New Mexico's UFO Museum, one of the world's largest resarch centers for UFO phenomena. The site of a supposed 1947 "spaceship crash," Roswell is now a haven for alien academics and enthusiasts alike. Attracting people from all over the world every summer for its yearly UFO Festival, an event I'm here to attend.

Soft-spoken and friendly in a small-town, Southern kind of way, Briscoe’s jokey but level-headed approach to running a museum devoted to, well, aliens catches me off guard at first. The truth is, I’m not quite sure where I stand yet as a “believer,” but I’ve binge- watched enough episodes of Ancient Aliens to entertain the possibility of a past in which ETs built pyramids.

“I want people to come away with a question mark in their heads if they’re nonbelievers,” says Briscoe of the festival. “We get where we are in this world by questioning things.” Hopefully here in Roswell I get somewhere, just preferably not via spacecraft.

Roswell feels exactly like the sort of place where aliens would land. It’s easy to find yourself alone in this quiet desert town, and at night you could hear a pin drop. While the actual site of the 1947 incident is closed, I quickly learn that what may or may not have happened here almost seven decades ago can be felt throughout the town in even the smallest of ways.

The local Arby’s proudly displays a sign that reads Aliens Welcome! in neon green block letters alongside a special offer for two French Dips priced at $6. Oval-eyed, otherworldly cartoons cover taco restaurants, print shops, and bakeries. At one point, I grab a burger at a neighborhood McDonald’s that’s shaped like a flying saucer. A shop called Alien Zone houses a dimly lit photo-op area filled with rubber extraterrestrials watching TV or operating on unwilling participants; at least four other similarly ET-centric stores are within walking distance. If you’ve ever wanted a glow-in-the-dark poster of a drunk alien printed with i’m only here for the beer, this is where you get one. “People who live in Roswell know something important happened here in 1947, they just don’t know what,” explains Dennis Balthaser, a gruff, 10-gallon-hat-wearing UFO researcher and local resident who gives tours of the town, summing up Roswell’s enthusiasm for its history of extraterrestrial mystery.

The UFO Museum is by far the town’s coolest, and most seriously informative, spot. Located in a repurposed movie theater, the museum is set up like a giant time line of information on the outer edges of the open floor plan. It begins with a detailed description of the Roswell crash and moves steadily into the supposed government cover-up in which the U.S. Air Force assured the public that the UFO was really a balloon used to detect Soviet bombs.

A “Photographic Evidence” section boasts blurry pics of both unexplained UFO phenomena and totally explicable sightings (“hubcap thrown in air, suspended hat”). Nearby, detailed, hand-written accounts from abductees line the walls along with many crudely drawn renderings of alien life-forms. A crop-circle section demonstrates the surgical precision with which they’re created around the world, seemingly by the use of a “cosmic cookie cutter.” I make note of the device description for a potential future band name.

“For 90 percent of UFOs reported, we can tell you what it is—it’s something from Mother Nature or it’s something man- made,” says Roger Marsh, communications director of MUFON (the Mutual UFO Network). “It’s that 10 percent group that we’re really interested in.”

When a UFO is determined to be truly alien, it can be difficult to connect threads between cases. Whether it’s a disc with waving humanoids spotted in New Guinea or a Chicago woman’s car being mysteriously melted in the middle of a highway, sightings come in a wide variety of ways. “It’s not like it’s a model factory where somewhere on Planet X they’re turning out triangle-shaped ships with fins this year,” says Marsh. “It’s hard to track these objects because every object is just a little bit unique." And even though it’s easier than ever to take pictures and document activity via technology, it’s also easier than ever to fake them.

Still, Ufology is a growing field, and organizations such as MUFON and CUFOS (the Center for UFO Studies) have been tracking and recording UFO sightings, abductions, and other alien activity for decades, while conferences and festivals like Roswell’s own and Joshua Tree’s Contact in the Desert celebrate and spread the word of that research. And while investigating extraterrestrial activity might seem exciting, it can also amount to a lot of paperwork. “It’s very tedious,” says Mark Rodeghier, the scientific director of CUFOS. “But there are a few X-Files moments, like when we’re dealing with some government cover-up—no Smoking Man, though.”

Today, Ufology is just beginning to get the scientific community on its side. “NASA is now involved with extraterrestrial life, even if it’s microbial life,” says Alejandro Rojas, a paranormal researcher and editor for UFO-reportage website OpenMinds.tv, as well as a festival speaker in Roswell. “The search for extraterrestrial life is now mainstream, and that’s really exciting.”

Walking around Roswell on the first morning of the festivities, it’s clear that there are three basic types of attendees: skeptics here entirely for entertainment (i.e., a hipster couple snapping silly selfies in the museum), your everyday, un-ironic alien enthusiasts (a family of six all sporting matching I Believe tees), and serious experts in the field from researchers to writers and more.

The whole event feels equal parts earnest and tongue-in-cheek. A Main Street lineup features vendors of handmade goods, carnival rides, and food trucks (complete with some alien-centric eats). Parents and children don homemade tinfoil hats. During the parade, a group of kids costumed as extraterrestrials does a synchronized dance routine to what I like to pretend is the official festival anthem, Beyoncé’s “Yoncé.”

This goofball attitude occasionally rubs some experts the wrong way. “When you go downtown and see people in tinfoil hats and adults dressed up like aliens, that takes away from the seriousness of the research,” says Balthaser. But overall it feels like for every person I overhear snickering, there is one wide-eyed child or genuinely interested adult. It’s at the festival’s panels and lectures where these people can seek some real answers.

And in the end, you’ve got to wonder if some of these “skeptics” who have made the trip out to Roswell are really all that closed-minded about the idea of life outside of Earth. “I think the majority [of people here] are casually interested in the topic,” says Rojas. “Which isn’t bad, because I like to talk to skeptical people.” This place might just be the proverbial alien gateway drug.

“This is something else,” says Derrel Sims. I’m staring into a case of tiny metal objects with a magnifying glass. If the premise of Sims’ workshop here at the festival is to be believed, these are “alien implants,” communicative devices that extraterrestrials embed in humans during abductions. These implants can present themselves as anything from metal lifesaver-shaped rings found in the leg to microscopic metal balls discovered in the nose. The implants monitor the human body and relay information; people who’ve been “implanted” report feelings of depression and changes in behavior.

An alleged victim of ET abduction as a child, Sims now bills himself an “Alien Hunter,” as evidenced by his dramatic three- minute workshop intro video soundtracked to opera. While there are only four other people in the class, including an older couple who seem concerned that they have implants in their legs, everyone appears entranced by Sims’ “they came while you slept” presentation. And even though he is never really able to explain exactly how these implants work, Sims is confident he’ll figure it out. “UFO phenomena is like a house of cards,” he says. “It’s going to crash eventually.”

Later in the day I try to find more info at a panel on abductions featuring Travis Walton, whose story got made into the movie Fire in the Sky; Kathleen Marden, the niece of famous American abductee Betty Hill; and abduction expert Yvonne Smith. Held in a Q&A format, nervous attendees ask questions about military abductions (some believe the government pretends to abduct people), what aliens look like (giant praying mantises are common and often leaders), and if you can stop an abduction (nope, sorry, sucks for you). “We always find those that we want to find,” says Marden, reciting what her aunt’s alien abductor told her.

People are typically first abducted when they’re children and then get re-abducted several times thereafter, I learn. And while abduction stories vary widely from person to person, there are some similarities between cases. “In the early days of lecturing I had two almost identical drawings of aliens wearing blue uniforms with white piping,” says Smith of a pair of subjects who had never met before. “They said they had such a hard time drawing them because they looked so perfect.”

But the biggest question is why? Why the abductions, why the implants, why come here? “We can’t really speak about an alien agenda because there are so many species and civilizations,” says Walton. “But the upside to being completely powerless to aliens is that if they haven’t annihilated us yet then they don’t want to.” He smiles meekly and I take his word for it.

some alien truths from the experts and reports

1. Aliens are gray, not green– Hollywood tricked you.

2. UFOs are completely silent, so watch your back....

4. These days, UFOs often come in triangle shapes, not discs.

5. Telepathic communication is how they speak with you.

6. Electronics typically don’t work in front of a UFO, so no Instas.

7. UFOs can be up to three football field lengths long.

NEXT UP
Sale
These Black Friday Deals On Amazon Are SO Freaking Cheap
Astrology
Your December 2022 Horoscope Fuels The Reboot
Life
NYLON Daily Newsletter: November 23, 2022
Culture
Gucci’s Alessandro Michele Era Is Officially Over