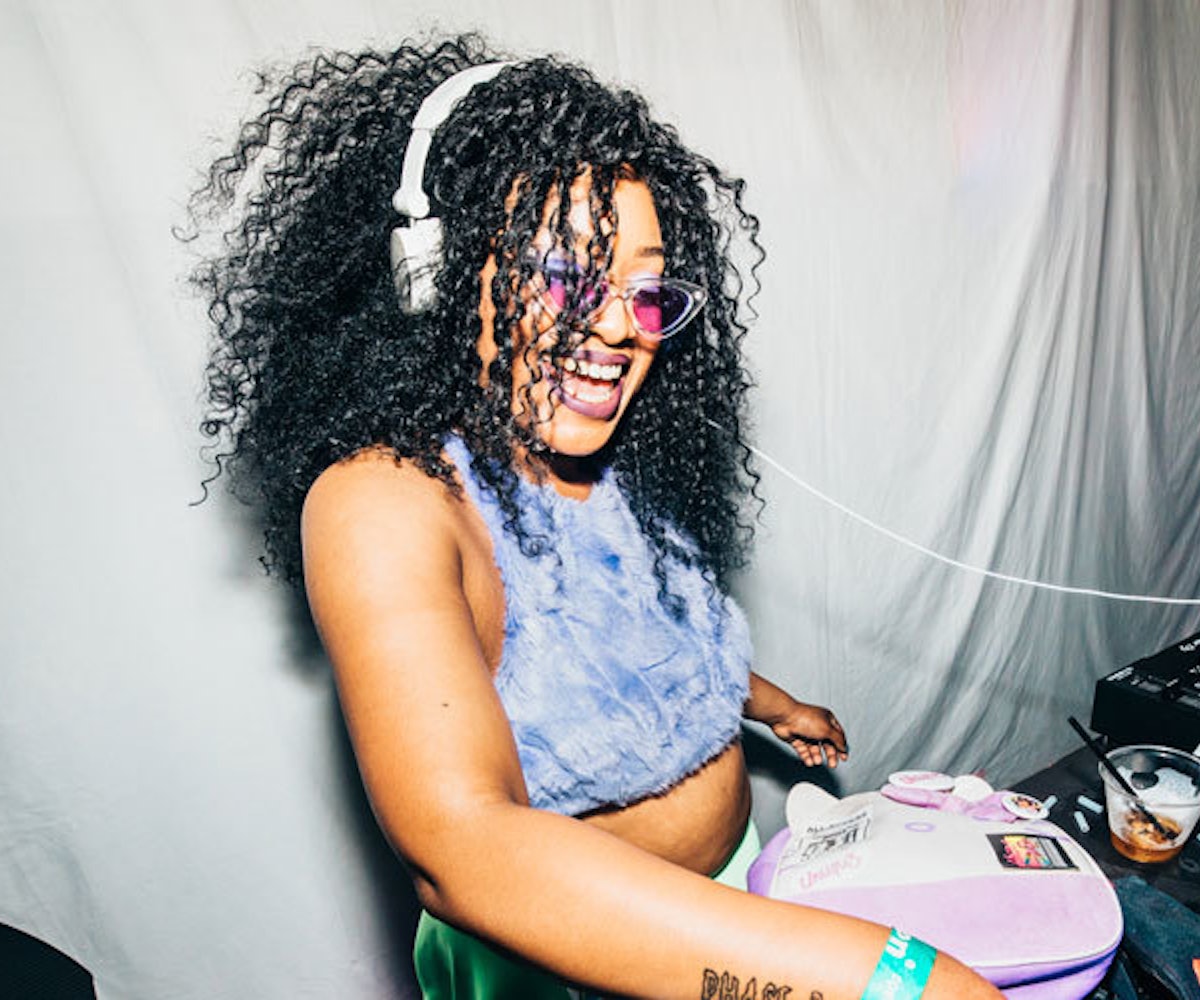 For some, life begins at midnight. It's at that time, that some people's true characters come alive and the dance floor becomes an exciting place; it's where Wall Street rubs elbows with aspiring artists, drag queens, small owners, PAs, sports broadcasters, and more. The DJ behind the decks plays a vital role in connecting all these identities. As a child and now leader of the New Jersey Club scene, Cherise Gary, better known as UNIIQU3, is a master of the nightlife melting pot. After all, Jersey Club in and of itself requires a knowledge of what's going on across each and every genre because Jersey Club doesn't discriminate when it comes to mixing. Rather, what Jersey Club strives for is a good time through whatever beat necessary.

UNIIQU3 is a true Club Kween. Venus X's early 2010s GHE20G0TH1K parties in New York City turned her on to the possibility of being a DJ and promoter, and since then, she's worked her way up through the party scene and raked in enviable numbers of streams across SoundCloud and Spotify. She's an ally and advocate, fully aware of the queer crowd she draws and her duty to cultivate a safe space for all identities to celebrate one another. UNIIQU3 doesn't just promote a good time, she promotes the values of nightlife: charisma, uniqueness, outspokenness, and the awareness that your unbridled self is the most fun and true. She just wants to create a space for that self to thrive. Get to know her, below.

How has nightlife shaped you for the better?

I pull a crowd that’s mostly made up of kids of color and LGBTQIA people. I feel like we are people that need to be accepted for who we are, and society doesn't always do that. As a person creating a safe space for those people, I definitely have had to learn to respect people. Nightlife is an opportunity to bring a fearless attitude out into the real world. Nightlife has exposed and introduced me to every walk of life. I’ve experienced everybody’s version of nightlife. Now, more than ever, I vibe with the acceptance of it all. I accept myself, for who I am and what I want to do. I respect others who want to be a little more risqué because of that. Those individuals help me love myself more.

Have you experienced any performative acceptance?

For sure. I feel like too many people are so worried about their title that it actually prevents a good time from being had. As an example, I’ve been to parties that are so uptight about letting in certain queer identities over others. I don’t understand that. Nightlife has only made me accept and love a person for who they are over their qualifiers. Everybody wants to be included—and they should be!—but when certain identities get placed over others, that I don’t fuck with. That’s not nightlife.

Thinking back on memorable nights out, who have you met that’s completely changed your perspective on nightlife?

I’ve met a ton of girls across the spectrum that keep my fire lit, but the people in the Twin Cities really know how to do going out right. We popped through [the Twin Cities] on this past tour. I made a point to curate lineups based on the city and to highlight their local talent. So in my research, I came across this girl named Destiny Spike who is so raunchy and does not give a fuck. I love her. She’s so poppin’. She and the city really know how to turn up and keep it cute.

As an artist and performer, what are you looking for when you’re going out to a party or show as a guest?

Good energy. That’s what matters the most. It doesn’t matter how packed the event is, the energy has to be on-point because you have to always want people at your event who want to be there. Not, like, people who feel like they should be there. You need people who are there to have a good time.

How do you help someone who may want to be there but feels a little intimidated?

I never show up to a show right before I’m supposed to go on. I like to feel out the audience and its vibe. Sometimes I’ll see someone hanging back and make a point to say hey to them. We, DJs, go with the flow, sure, but it’s our job to help people have a good time. I take that job very seriously. I say hey to wallflowers and help them feel more comfortable.

What if they don’t want that sort of attention?

If you’re going to be out, be out. There’s nothing worse than being out knowing you could be having a better time at home, on your couch. I don’t want anyone waking up regretfully asking why they went out.

I feel like “if you’re going to be out, be out” can be applied to many situations…

It can! I hate when people half-ass their makeup. Like, you’re putting stuff on your face; go big or don’t.

Sometimes all it takes is for someone who may be a veteran or seems like a veteran of nightlife to recognize someone new to the scene and say hey. Why do we party?

We have parties so that we don't have to give a fuck about what's going on in the real world. I’m seeing all these real-world problems affecting our safe spaces, like the identity thing we were talking about earlier. Who’s to say who can turn up here and who can turn up there? We can't let these real-world problems always affect our spaces. I throw parties because I want people to feel comfortable, I want them to feel free, I want a safe space where people don't have to worry about anybody trying to dance with them because everyone's agenda is to just dance. Like, if the song is poppin' and says “shake yo ass,” you're supposed to shake your ass. I’m all for uplifting women, kids of color, and the LGBTQIA through music and dancing. The dance floor is a great equalizer if we let it be. I think we can.