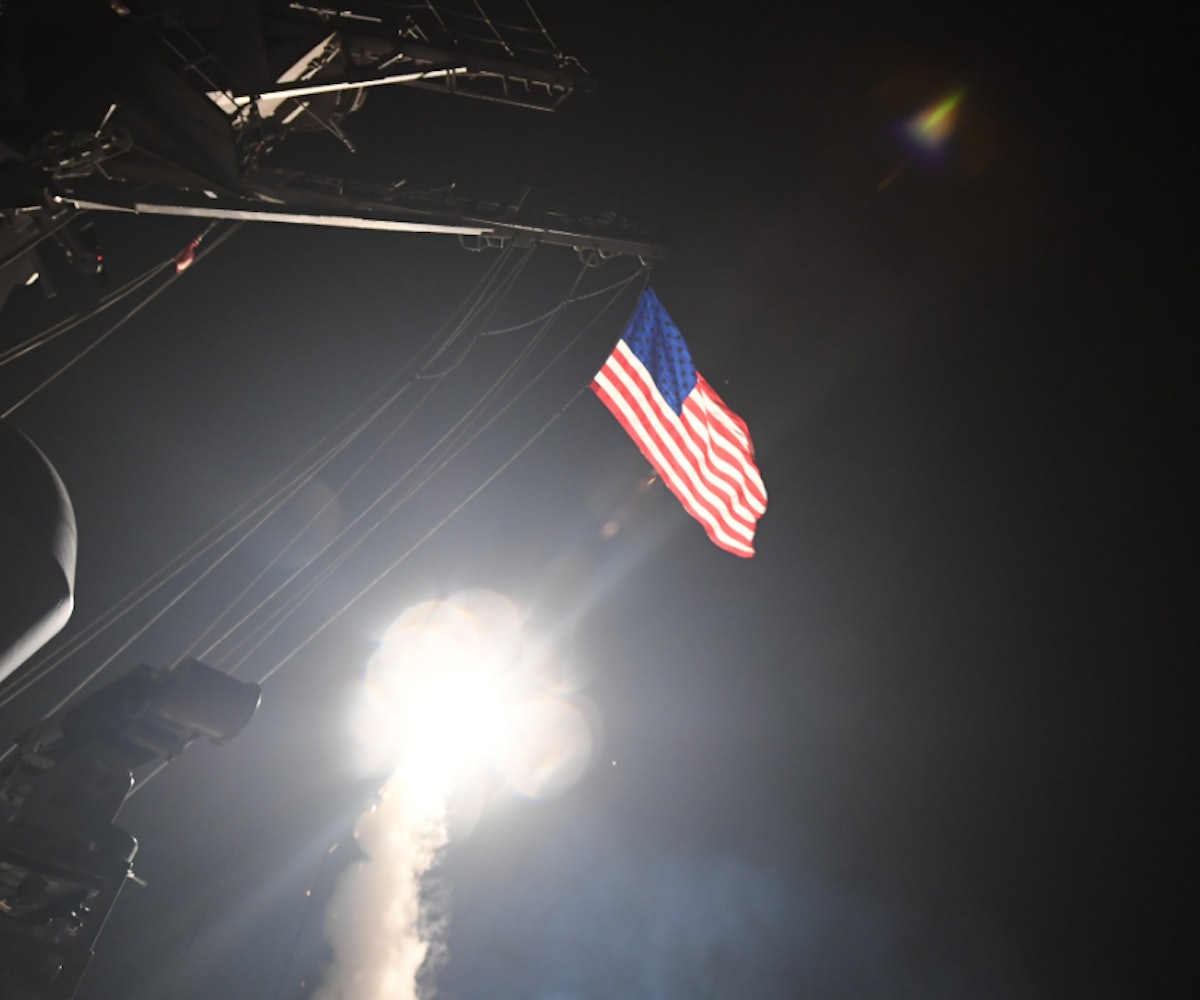 A scary new phase in Syria’s ongoing civil war began last night as Donald Trump ordered the launch of 59 missiles aimed at Syrian military targets. The sudden attack came after President Bashar al-Assad ordered a chemical weapons attack on his own people that killed more than 80 civilians and shocked the world. In a surreal scene at his Florida retreat Mar-a-lago, Trump, who only two years ago was hosting The Celebrity Apprentice, announced the ordering of his first major military operation to the world, saying, “It is in the vital national security interest of the United states to prevent and deter the spread and use of deadly chemical weapons."

Less than one week ago, the Trump administration publicly acknowledged that attempting to remove al-Assad from power was essentially pointless and that his regime was a “political reality,” according to the Press Secretary Sean Spicer. Secretary of State Rex Tillerson reinforced the administration’s position that any kind of intervention in Syria was off the table. “The status and the longer-term status of President Assad will be decided by the Syrian people,” he said last week.

But after the brutal sarin gas attack in the country’s Idlib province that claimed the lives of scores of young children, Trump, in a joint press conference with King Abdullah II of Jordan, stunned observers when he announced that his position on Syria had suddenly changed. “I will tell you that attack on children yesterday had a big impact on me,” he told reporters. “My attitude on Syria and Assad has changed very much." In keeping with his protocol, Trump also blamed Barack Obama and his infamous red line for the events in Syria, and all but vowed to take action. Later, on Air Force One, Trump hinted to reporters that his administration was weighing military action. “Something should happen,” he told them. The move was in stark contrast to Trump's predecessor, who was famously reluctant to involve America in another conflict, particularly in the Middle East, and who did not retaliate against the Syrian government after a similar attack against their own people in 2012.

It is also worth noting that in 2013, Trump, who authorized the strike without congressional approval, tweeted criticism and warning at the then-president for doing the exact thing he just did. “AGAIN, TO OUR VERY FOOLISH LEADER, DO NOT ATTACK SYRIA - IF YOU DO MANY VERY BAD THINGS WILL HAPPEN & FROM THAT FIGHT THE U.S. GETS NOTHING!” he wrote at the time.

And so here we are, witnessing an incredibly sudden and impulsive move by a president who once claimed he was reluctant to get involved in foreign conflicts while at the same time promising an increase in America’s military spending. Trump is framing the military strike—which the Syrian army has said claimed six lives and which were condemned by Syrian allies Russia and Iran—as a direct response to the images he saw of innocent people dying. It would be, in a somewhat perverted way, the most humanizing moment of young presidency. But as with anything Trump says—and this is entirely through fault of his own—it is difficult to take anything he says at face value.

“We ask for God's wisdom as we face the challenge of our very troubled world,” Trump said near the end of his remarks. “We pray for the lives of the wounded and for the souls of those who have passed. And we hope that as long as America stands for justice, then peace and harmony will—in the end—prevail.” Opinion on America’s latest military campaign is divided, but while our president’s actions have a full, deep impact with consequences that as of now remain uncertain, his words on the matter ring empty.