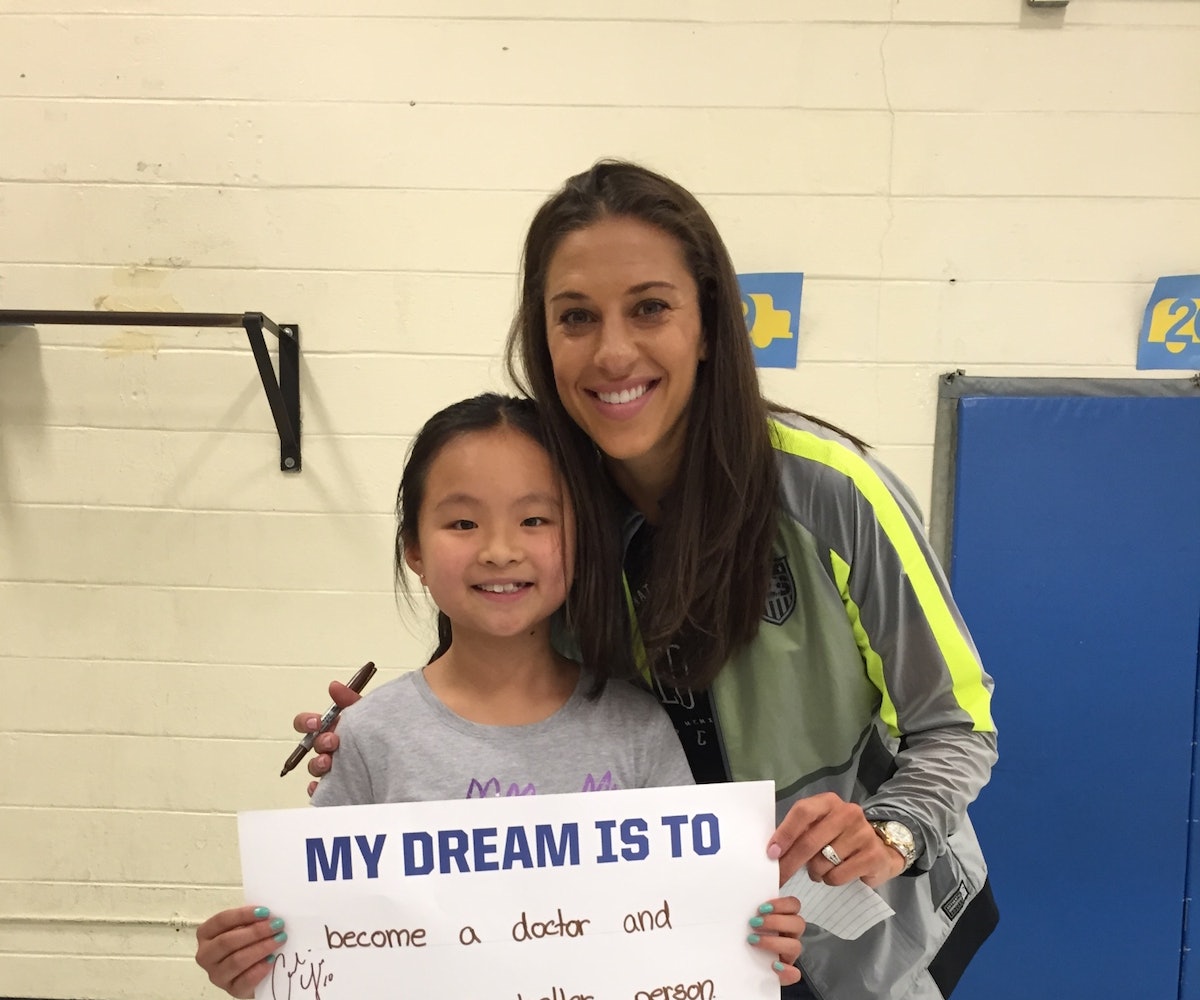 Every athlete knows this to be true—no matter what the calendar says, there is no off-season. So even though the U.S. women’s soccer team finds themselves in a year sans World Cup and Olympics, they are still gearing up for competition, and it comes with an important message.

The U.S. is hosting some of the top-ranked teams in the world—France, Germany, and England—to join them in the states for the SheBelieves Cup. The tournament is meant to inspire young girls to go after their dreams and celebrate the spirit of competition.

All of the matches will be ones to watch: Germany will take on France in a rematch of their Women’s World Cup quarterfinal, England will face off against Germany (the team it defeated in the third-place match of the Women’s World Cup), and the U.S. will take on England for the first time since beating them in February of last year, which sparked a 24-game winning streak, including the run to the Women's World Cup title.

U.S. Soccer will also offer a four-day Girls Fantasy Camp during the second set of matches, where girls born in 2001, 2002, and 2003 will have the chance to train with former Women’s National Team players, take a pre-game stadium tour, have view access to warm-ups, and snag some U.S. Soccer swag.

We sat down with U.S. captains Carli Lloyd and Becky Sauerbrunn to talk more about the tournament. Here are a few takeaways from the team’s fearless leaders, that apply on and off of the field.

On the phrase SheBelieves

Becky Sauerbrunn: "Lauren [Holiday] was actually the one who came up with SheBelieves and it stuck, and everyone, I think, is really happy with the name—it’s really powerful, and easy to hashtag. But the messaging itself for SheBelieves is just very powerful because it can be tough at times for young women in America. We were reminiscing about middle school, that age where you don't have a lot of confidence and you don't really believe in yourself, and if there was any way that we could show these young women the power that comes from believing in oneself and believing in others. And that's how it came about and that's what we're proud to fight for."

Carli Lloyd: "U.S. Soccer wanted to put on a great, competitive tournament in the U.S. And so we've got some of the best teams in the world coming, and competing, and playing. It’s great to play these teams... It kind of has this theme around it—the SheBelieves Cup—that's sort of an inspiration to young girls and really anybody who kind of has dreams and aspirations. It's just a great, great tournament."

BS: "You see some girl-on-girl crime, where if one person achieves success that means there's less success for another woman to have. I think we need to completely just blow up that entire mentality and we need to be celebrating each other's successes. Especially when you work within a team. Yeah, some people get chosen or awarded, but really it's a reflection on the team. So, I think that's something that you learn in any tight-knit group or with women, whether in sports or outside of sports—that we really need to work together, and elevate each other, and believe in one another because there's a lot of strength and power when you know that you look across a table or you look across the field and you see someone who believes in you just as much as you believe in them."

CL: "I think women supporting women is just what we need. Not everyone is going to become CEO of a company or a professional athlete, but no matter what you love to do, you should have the confidence to do it and believe in yourself every step of the way. And I think that's kind of the most important thing; I think women sticking together just helps us all become more confident, and self-aware."

On going above and beyond

BS: "I think there's a really healthy understanding on the team that it's the work that we put in away from the game that really matters. It's when we're in the meal room and we're just talking and teasing and joking around—you know that chemistry translates to the field. The big moments come and go, but all of the little ones add up to them, and I think that’s something that we realize has a lot of power."

CL: "With belief, you need preparation, and in order to succeed, you have to be willing to get knocked down and get back up again. And you have to be willing to put the work in every day. I always tell young players if you train with your team on a Tuesday and Thursday, that isn't good enough, you know you have to be clocking in the hours on your own, away from your team—that's ultimately what makes successful people. If you work really hard and you put your mind to it and you focus on yourself, and you compete against yourself, and don't make any excuses, good things can happen."

On what advice they would give their younger selves

CL: "When I was a youngster, I solely relied my talent and I didn’t really have the fitness base to be able to go out and work hard every single training session. I would tell myself that running and eating healthy are very important. You can always look back and want to tweak things, and I think that’s life in general."

BS: "I would give myself a little bit more of a break. I think I was very hard on myself and would over-analyze everything. I needed to let things slip off my back a little bit more and not get too high when things were going well, and not get too low when things were going poorly. And just control what I can control. I mean, it's an easy thing to say, but I think that really would've helped me stay a little bit more level growing up. Like, 'I'm going to do that best that I can do and just let the cards fall where they may, and we'll go from there.'"

Becky Sauerbrunn at the SheBelieves Cup.