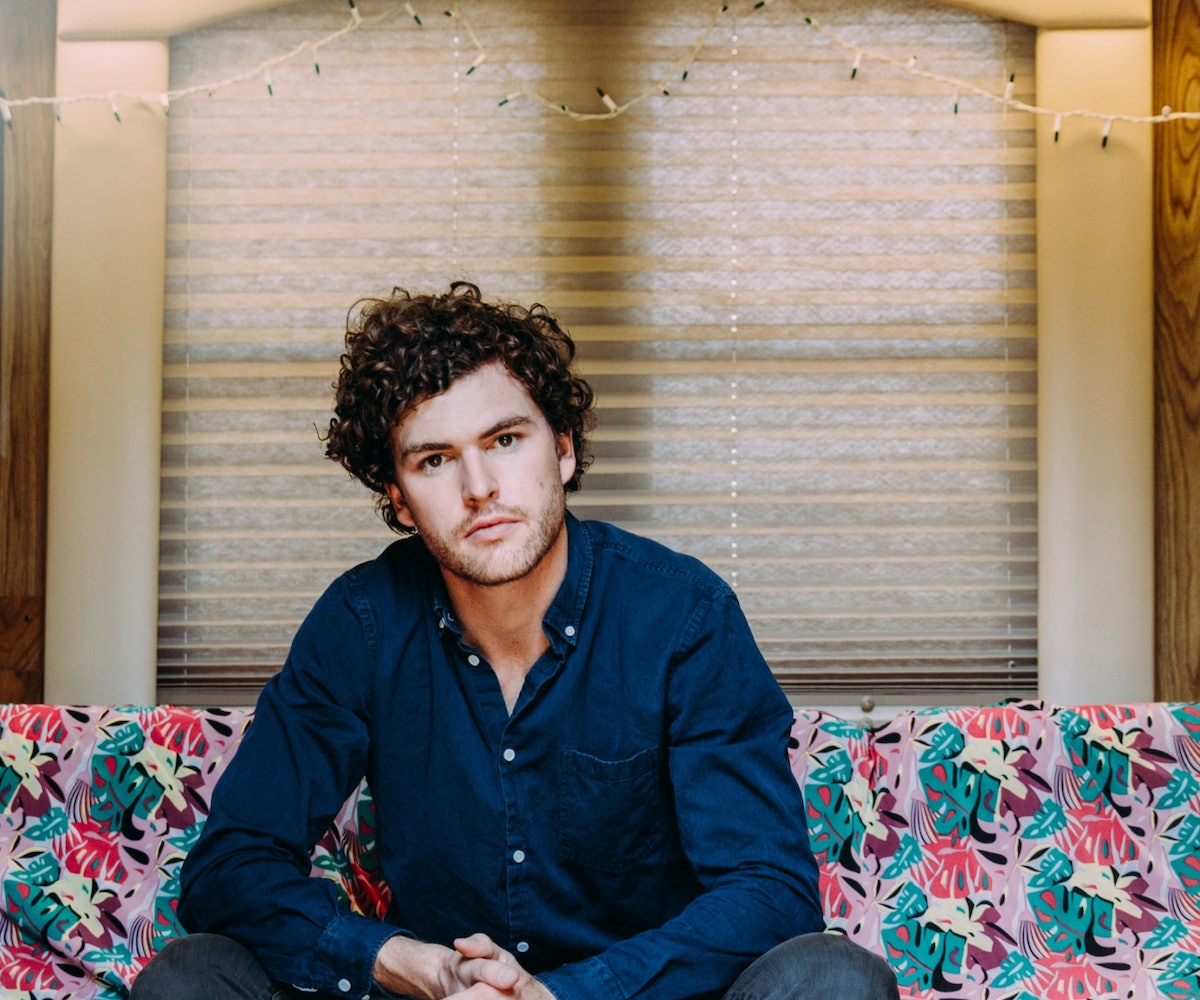 We knew we'd found the perfect summer song when Vance Joy's breezy, ukulele-based single "Riptide" came on our radar—and it seems like Taylor Swift felt the same way. Australian singer/songwriter James Keogh has achieved a lot since adopting his literary-inspired stage name, from getting his law degree, to releasing his first full-length album, and now, opening for TSwift on her 1989 tour. And while the acoustic musician may have learned a lot in his time at university, he's taking in more than ever as he travels and performs around the U.S.

We chatted with Keogh about his rapidly growing music career, disappointing movie sequels, and what it's like touring with one of the biggest pop stars alive.

It’s been a challenge getting used to bigger audiences and walking out in front of more people. We’ve played three shows so far, and a couple of them have been 50,000 people, so it’s crazy. I think you’re performing under pressure, so I’ve had to step my game up a little bit. It’s been good to learn. It’s incredible. When she comes out it’s incredible—the fans are so into her. I’ve never experienced anything like that before.

Do you have any pre-show rituals?

Yeah, I kind of warm up my voice. Besides that, I try to be like Manny Pacquiao, the boxer who’s just hanging out and playing video games before he goes and fights. He’s just super chill and talks to everyone. I like being like that, but I also can’t help but go into my shell a bit. I get kind of quiet before we start. I guess I can’t help but be quiet and reserved, and then when the show’s over I can relax.

After your set do you watch Taylor?

Yeah, I’ve watched the entire show the first night and I watched her a few nights ago in Detroit. She’s got an incredible intensity as a performer. Especially in Detroit recently it was palpable, how energized she was and how enthusiastic. It’s cool to watch when I can stand in the front of the house—I’ve got the best seat in the house.

Do you guys do anything after shows or do you just crash?

Usually just crash. I’m kind of looking forward to getting into that stride when everything’s running smoothly, and once you’ve got that down it’s good. I guess because it’s Taylor’s show, it’s nice that I have the area where I can just stand up and take it in.

Since you’re traveling so much while you’re touring, how do you stay energized when you’re also writing songs on the road?

I think sometimes you go through big periods of creativity, and sometimes songs come along when they want to and you just scratch away, scratch away, scratch away, and you’ll be like, “Where did that come from?” I guess that’s the way I see creativity. But in certain times of pressure, it’s quite good to have a few drinks—or not even drinks—but to go out and engage. It was stressful yesterday so we went out and walked around. I don’t know, stuff like that—meeting people, having fun, doing that kind of stuff. It cleans you out. You feel that build up of tension and you just want to unleash and have fun.

I have nothing in the works, but I know she’s amazing when it comes to duets. In Detroit she did one with Dan from Imagine Dragons—they did “Radioactive” together. But we haven’t done one yet.

Is there any artist you dream of collaborating with?

I really like Feist. Her songs are incredible. I think that’s it, really. You can write a great song with anyone, so I’m open-minded.

I’m a songwriter—I’ve always played the ukulele or the guitar and have sung. I think it’s pretty stripped back. Instrumentally, it’s quite raw. I guess the aesthetic is the way my voice sounds and the way I play guitar, and everything else is in support of that.

Are there any summer movies you’re looking forward to seeing?

I want to see the new Jurassic Park movie. I feel like I’ll be disappointed because they’ve given away so much in the trailer but, I mean, it’s going to be super predictable I suppose. But doubtless, the marketing has worked on me. Besides that, I’m not really sure. I’m currently into The Wire, the television show. That’s where all my attention is at the moment.

And your stage name, Vance Joy, was taken from a book, right?

Yeah, I took it from a book called Bliss by an Australian author, Peter Carey. He wrote this really cool book and I picked it up one day at university, and I just started reading it and about ten pages in, this character appears called Vance Joy. I just really liked the sound of the words and the look of them on the page, and I guess at the time I was considering maybe having a musical alias or calling myself something else. I had that in my pocket for a while, and eventually when I started playing gigs in really small cafes, I would put my name down as that. So that’s how it started.

Speaking of university, you also started your musical career after you got your law degree—what was it like going into the music business after years in school?

I think I’m glad that I had all that time to try other things. I had my musical ability, but my songwriting ability had’t developed until after university. I didn’t have time for it and didn’t even really consider doing it. During university I wrote a song here or there, but it wasn’t a real focus. In about 2010, I wrote a song and in the next few years my main source of enjoyment and satisfaction that I got from what I was doing was songwriting. I was trying to finish my university degree, but I had this ambition bubbling away. I knew I had to get better at songwriting and I needed to record my songs, and once I did that, I went and said, “I’m going to spend six months and just do music.” And since I made that decision I haven’t stopped doing music. I think it’s just a matter of developing and integration.

I’ve been listening to Sia. I really like Sia. And I love Sharon Van Etten. She has a couple happy songs that I really love—not that I don’t like her sad songs. I like them all. And Bat for Lashes.

If you were an emoji, which emoji would you be?

When you say that, the first thing that comes to my mind is the little green frog. So I should just stay true to that. That’s exactly what comes into my head.