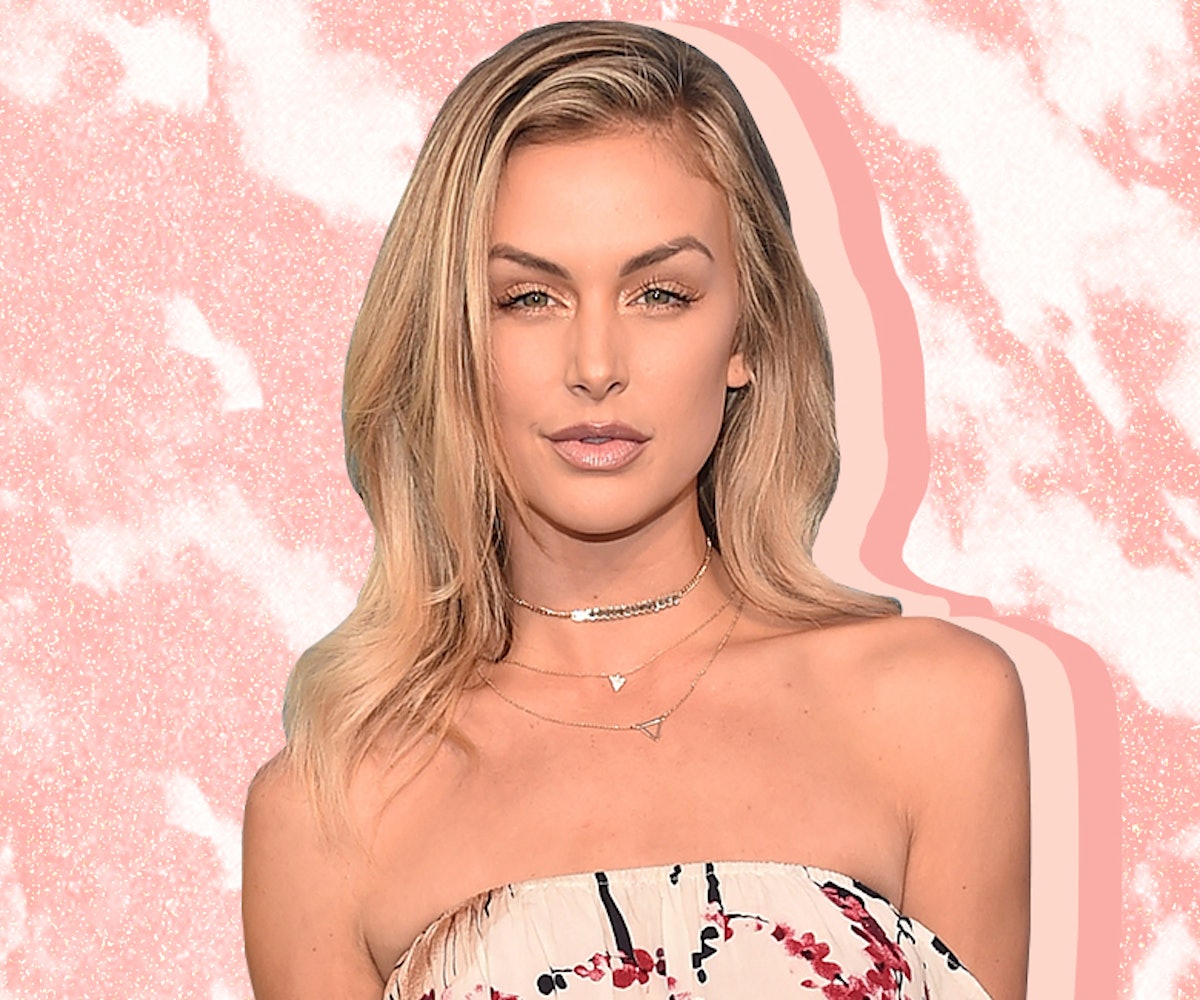 Lala Kent has been the object of an excessive amount of negativity since her start on Bravo’s Vanderpump Rules two years ago, but all the name-calling has resulted in Kent being given a new moniker: feminist icon.

But let's start at the beginning: In Season 4 of the reality television series, Kent appeared as the new antagonist to the show's “Witches of WeHo” coven (i.e. current and former SUR Restaurant employees Stassi Schroeder, Kristen Doute, and Katie Maloney), which put her in a difficult position—one that Kent says she’d “never want anyone to experience.” And yet, Kent held her own as a strong woman—especially for a television genre infamous for objectifying women, egging on catfights, and constantly pitting women against each other. Kent is a vociferous force with which to be reckoned, and one who doesn't always want to play into the manufactured drama.

“I can post about Katie’s [makeup line, even though I have Give Them Lala Beauty], no problem. I can support my castmate,” Kent tells me, as we eat lunch at SUR. “It’s very weird, the pitting of us [against each other] and everything. We just need to accept the fact that reality TV is for people who thrive off drama, myself included.”

Even while taking generous scoops of tuna tartare, Kent is radiant, sitting in a (bedazzled) sweatsuit miles away from the Vanderpump Rules confessional with its army of professional retouchers and hundreds of thousands dollars-worth of studio lights. I find myself fascinated by her skin—poreless, perfectly bronzed, almost polished-looking—before she catches me staring. “Botox,” she says, reading my mind. “Every time I go into Dr. Diamond’s office to get my injections, I always do a live video, because in no way do I want anyone to be like, ‘This person looks like this naturally.’”

Kent cracks a small smile before revealing that, like, “half of L.A.” is also using Botox: “Nothing’s perfect. Lord knows I came outta my momma looking very different.”

Shielded by an aura of unflappable self-assurance, Kent possesses the type of in-your-face confidence that acts as a mirror to your own flaws. That said, she says she’s gradually grown accustomed to the issues her castmates—and viewers—tend to project upon her, whether it be related to their own relationship insecurities or body image issues. Specifically, she's grown used to the criticism that she’s just another classically beautiful, thin, white woman who has it easy when it comes to being body- and sex-positive.

“I feel like every single person at some point has experienced something a dude has either said or done that makes them start to feel uncomfortable about whatever body part... that’s why the conversation with Ariana came up,” Kent said, referring back to a moment earlier this season in which “super-hot” cast member Ariana Madix confessed that she struggles with body and sex issues as a result of a past emotionally abusive relationship. “How is anyone to sit there and say, ‘Of course you feel confident when you look like that?’ Like excuse you, I could look you up and down [and find] a million different things I’d trade you for.”

Her voice pitches an octave higher after we begin talking about some of the criticism, which also included people calling her brand of feminism reductive. “You’re not only offending me but are you saying that you have to be ugly to be a feminist? You can’t be a feminist if you’re quote-unquote good-looking? That’s so fucked-up,” she seethes before responding to the people claiming she’s merely posturing politics for the camera.

“My whole thing is holding men accountable for their actions and that whole thing kind of evolved into Lala’s 'down for the power of the pussy' thing,” she says. “It’s all connected to me just being body-positive. I’ve never felt the need to talk about anything when I go in to film, but, like, everything that’s spoken about is how the men are fucking up.” She brings up Maloney’s husband Tom Schwartz's recent transgressions, as well as Scheana Marie’s boyfriend “being a dick.”

“It was kind of like, what if instead of fighting each other, we realized that our men kind of suck sometimes? Like put them on time out and get drunk together?” Kent laughs, rolling her eyes at the way so much drama seems to stem from the actions of men. “That sounds more fun to me than bickering about how your man kissed someone else.”

However, Kent is also the first to admit that she’s not perfect, and that is why she feels slightly uncomfortable with the “feminist” label, especially since “everyone is problematic.” There was even a recent moment in which someone apparently called her a “young Gloria Steinem”—a title that gave her “intense anxiety” as something she felt she could “never live up to in my entire life.”

“It’s setting me up for failure because a [by-the-book] feminist would not do half the shit I do,” she says, referencing her notorious “if you come for me, I’ll come for you” attitude. “In order to not rip myself a new one at the end of the day, [I have to realize that] this is a job we have to get done, and we’re crazy, and that’s why we have a show.”

Or, actually, Kent reflects, “We’re not crazy, we’re just reactive people. We’re triggered in certain ways, we act out, we don’t go ballistic for no reason. We’re people." Her face falls for a brief moment, a wave of palpable insecurity crossing her otherwise preternaturally serene features. “If you’re a woman, I’ll be the first to bring you up and help you feel good,” she says, “But if a woman says bullshit, I will come for you, and that’s when people are like, ‘Oh, she’s not a feminist.’ I wish I could rise above, but I’m not God, I’m not Jesus, I’m not about the turn the other cheek.” She pauses for a brief moment: “I’m not about to rise above. I’m about drag you.”

That said, there is one moment she does wish she could take back—when she body-shamed Maloney, coining the infamous “summer bodies” line. “My momma always told me that you can attack and go for people all day long, but the one thing you can’t touch is someone else’s appearance. She taught me that from the time I was a little kid, so that moment was just disgusting,” another wave of dismay colors Kent's voice, which has grown slightly quieter. “It’s the one thing I don’t even really like to talk about it, because it’s like, ‘Lala, what the fuck?’”

Kent says that the two are in a good place now following a “major breakthrough,” which has also resulted in her making amends with the rest of the women on the cast, a departure from her quitting mid-way through Season 5 due to the show's drama having “too much of a negative impact on my day-to-day life." This all came on the heels of a story line that saw the entire cast speculating on Kent’s love life, namely who her mysterious, rich, older boyfriend was.

It’s part of Kent’s overarching desire to protect her entire close friend group and family from the glare of the reality TV spotlight. “We talk about the authenticity of the show, but I’m the one person to step in like, ‘Yes, let’s be authentic, but we can still establish boundaries, just like we do in real life,” she elaborates. Citing that she didn’t feel like last year was the right time to lay everything out, Kent says that she “didn’t feel like this group deserved me talking about my personal life in detail.”

“I realize we signed up for a reality TV show, but I will stand behind my own belief that for every single person on the show, if there’s something you don’t want to talk about, you don’t have to, because that’s how real life works,” Kent said, before emphasizing that the people that really did matter to her knew everything. “I and my friends and my family who weren’t a part of the show knew the ins and outs of what was happening, but they were the people who, at the time, I felt deserved to know what was happening. It wasn’t only about protecting myself, but I’m protecting him and my family.”

That said, she assures me that the two are happier than ever. Asking me to refer to him solely as “her man” (a power move, for sure), Kent is ready to fight the critics who say she’s just with him for his money: “If he were to go away today, I could afford my own car. I can survive with what I have.”

With that in mind, Kent maintains that another tenet of feminism is respecting the boundaries of other women. “Everything I’ve been through in the past two years has been quite eye-opening,” she said. “When I see certain women do certain things, I’m like, we don’t know the full situation.” For her, the biggest part of supporting women is pausing immediate judgment, especially within a world that constantly scrutinizes and picks apart their every move.

“I want to change the way [my version of feminism is] presented. I want it to be about being comfortable as yourself,” Kent says. “My thing is, let’s come together as women... I want to make sure everyone sits there as women and understands each other's circumstances—understands that it’s not easy just being who we are.”

She pauses for a second, a small smile spreading across her face, “The Man is always coming and trying to suppress us, and even though I love my man dearly, if he or anyone else, ever dictates who, what, when, and where my life is at... I’ll be damned.”

This interview was conducted before the unexpected death of Kent's father earlier this week.

NEXT UP
Culture
Spotify Wrapped Is The Only Social Media That Doesn’t Lie
Entertainment
Precious Pepala Is Going From TikTok Covers To Her Own Resonant Songs
The Art Issue 2022
From Renaissance To Gemini Rights: The Stories Behind 2022's Best Album Covers
Entertainment
Olivia Rodrigo Hinted At New Music In 2023