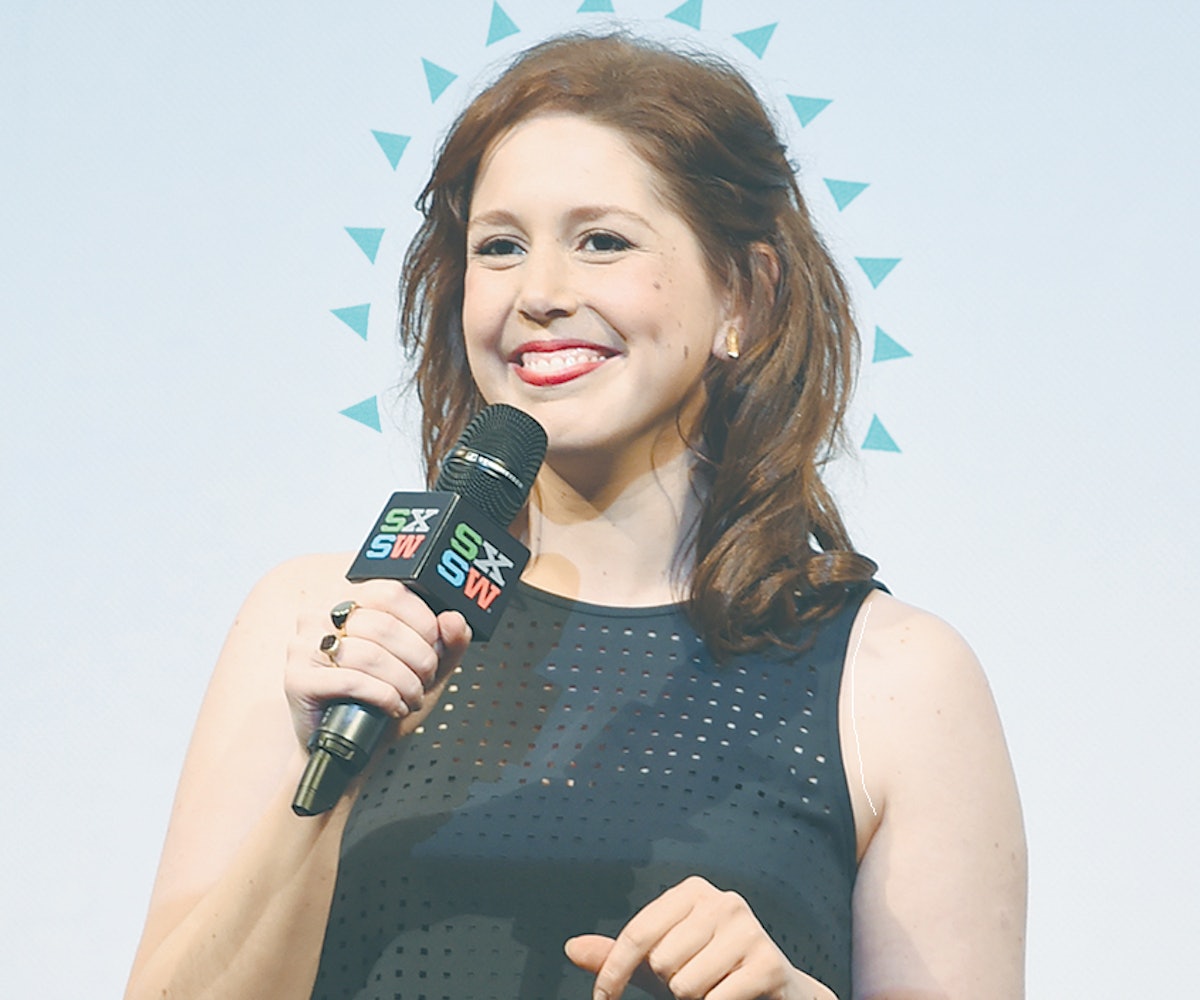 Vanessa Bayer, if you didn't know already, makes one hell of a Miley Cyrus. But she also is pretty great at skewering the music industry, with her incredible and incredibly funny take on the stupid crap artists are asked with her series "Sound Advice." (Hint: She dishes out nothing that possibly resemble sound advice to artists like Sleater-Kinney and Haim.)

However, this weekend marks a new step for Bayer's comedic career, as she takes to the big screen aside The Funniest Woman In The World (a title we just made up), Amy Schumer, in the critically acclaimed sex comedy Trainwreck. Bayer plays straight woman Nikki (well, as much as she can) to Amy's loopy version of her own self, Amy. Vanessa herself has had her share of trainwrecks, which she shares here. And also, how much would you pay to watch her crush "Who Will Save Your Soul" at karaoke? We've got five on it.

Have you ever been on a date or that was truly a train wreck?

I feel like I’ve been on a lot of them. One time, when I was in college, I took this boy to my formal and he was this pretty big guy. We were drinking these jugs of wine and I was trying to match how much wine he was drinking...so I got sick immediately. I then proceeded to go into the tiny ladies room at this small cafe and throw up in the sink because I was too drunk to realize that I should throw up in the toilet. Then we went back to my dorm and I was like, "You should stay and hangout!” and he was just like, “I’m going to go home.” And I just remember waking up in my room and there was vomit everywhere—like my pants were covered in it.

Were you like, "Just stay and hang out with me and my puke pants?" Was it red wine?

It was, so I’m sure my teeth looked great and my whole look was amazing that night.

This movie talks a lot about the nature of monogamy and whether it’s possible. Do you think it’s possible to be in love with someone over an extended period of time or—possibly—forever?

I think it is because my parents have been married for almost 40 years, so because of that, I do think it’s possible. However, I have not personally found someone where I’m like, "This is for life." So I haven’t found it myself, but I think it’s out there. I don’t think everyone is up for that, though, and it’s fine.

Yeah, that’s been something that’s been happening in my friends' lives recently, where it’s like maybe you’re just meant to have lots of really amazing relationships over extended periods of time.

No, I think that’s totally a real thing and it’s great. It’s good to know that you don’t have to make yourself crazy if that’s how you feel.

How was it collaborating with both Judd and Amy?

It was amazing. They were both so open to us improvising all the time. And the script that Amy wrote was just so amazing and so fun to work with both of them. Amy is great to improvise with and Judd allowed us to throw out ideas. She’s also a very generous performer and allows other people to shine. That’s something I found really special about Amy. Not only is she really funny, but she's also she’s very supportive. That’s not always a combination that you find.

How did you and Amy meet?

I met Amy when we auditioned. They brought me to the audition and we read and improvised. It was the first time we met, and we just had this instant connection. A lot of people ask, “How long have you know each other or been friends?” but it was just this instant connection where I’m like, "Where has this girl been all my life?” We just got along so well, so it was great.

Is she really this magical, feminist creature that we all believe she is?

Do you play music?

I played piano when I was younger, but unfortunately, I don’t play an instrument now. My brother is a musician in a band called United Nations. He plays a bunch of instruments and is a music journalist, too.

How did you come up with the idea of Sound Advice?

I came up with it with my brother because he’s in the music world and I’m in the comedy world, and it just felt like this natural thing. He knows all these bands and interviewed bands for real, so it was writing these questions that you would never say to a band. It’s so much fun and a lot of times musicians are so funny, but they have to be so serious when they’re doing their shows, so it’s a funny way to show off how funny these musicians can be.

How do you get musicians to come out of their shell?

We’ve been pretty lucky with that, but sometimes we’ll have suggestions for the artists on things that they can say back, but in general they’ve all been really funny. What’s great is that they’ve all been so different from each other that we improvise a lot and we don’t know the direction it’s going to go. We always get a fun, different result from it.

I feel like female musicians are still barraged with crappy questions.

I know! So it’s fun to give them those crappy questions but know that they’re crappy and hear what their real response is.

You said your brother is a journalist…what do you think is more fun—celebrity or music journalism?

I think it’s kind of what you’re a fan of. He loves music so much, so he loves writing about it. I think it just depends, but it’s so cool and funny how awesome these musicians are because it’s not a side they always get to show.

What are five songs that are currently defining your summer 2015?

What is your go-to karaoke song?

I really like “Who Will Save Your Soul” by Jewel and “Alone” by Heart. And if I’m really trying to raise the mood of the room, I’ll do “Look Away” from Chicago. People will get so into it. I think when I’m doing Jewel, I’m kind of doing an impression of her. I’m really into “Hands” by her, too. It’s a pretty easy register. My favorite song growing up was "Edge of a Broken Heart” by Vixen.