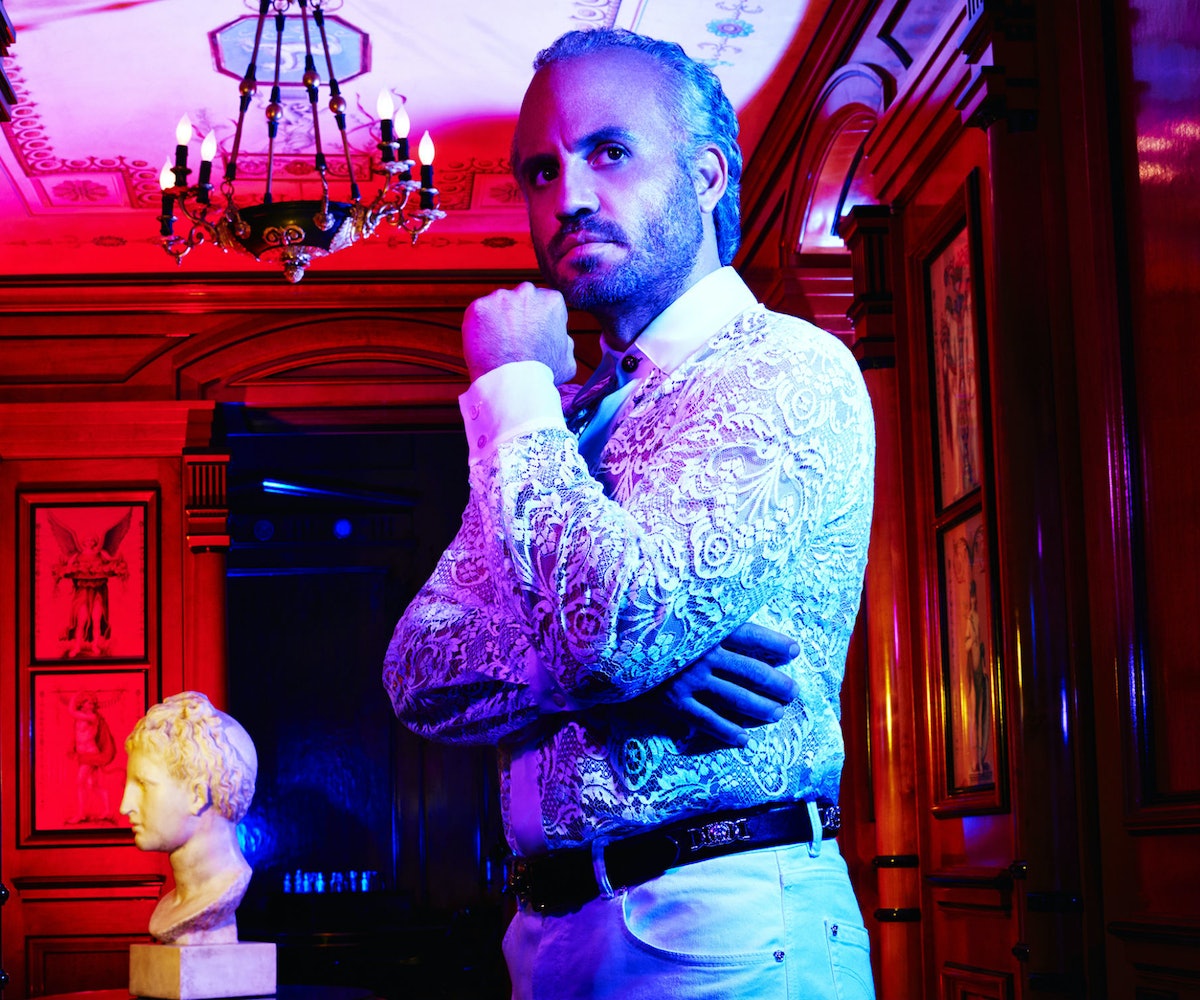 In the first scene of Ryan Murphy’s The Assassination of Gianni Versace, the camera pans from a painted image of clouds on a ceiling to a barely awake Gianni Versace lying in bed. He gets up, slides into his slippers, walks over to his Biedermeier closets where he puts on a pink robe, and saunters out onto a balcony overlooking Ocean Drive. He has breakfast—poolside—while the camera pulls back to show an aerial view of the Medusa mosaic beneath him and highlight the expanse of the iconic designer’s massive villa. In the following scene, he grabs his keys, exits through the ironclad gates, and walks down the same steps upon which he would later be murdered.

The series was filmed over the span of a month in the mansion, which is now a boutique hotel. “I don’t think I could have made the show if I couldn’t have gotten that house,” Murphy told the New York Post. “There was no way you could build [a set] of it.” It’s true. The property isn’t something you can easily recreate—if at all. And though the focus of the show is primarily on killer Andrew Cunanan’s twisted backstory and his life leading up to the murder of the designer (his fifth and final killing), the mansion is very much a star character on Miami’s South Beach Ocean Drive.

The Villa Casa Casuarina, better known as the Versace Mansion, is the third most photographed residence in the United States after the White House and Graceland. If you stand outside the gates for more than a couple of minutes, you might find couples taking pictures. A baby walking up the steps while his parents take a video. A man snapping shots of the entrance with his DSLR camera. A family posing for a selfie. People primarily stop to admire what can be seen from the outside, but the exterior isn’t nearly as ornate or grand as what’s inside.

Versace purchased the property, which was previously an apartment building, in 1992 after falling in love with the architecture. “Even then, this was a unique property, there was nothing like this on South Beach,” explains Roberto Fuschi, one of the directors for the Villa. “So, for an Italian, looking at this, you almost feel at home. There is nothing like this.” He also bought the Art Deco hotel located next door, which he demolished and turned into the garden, pool, and the south wing of his estate. He spent an estimated $32 million in renovations and transformed the historic property into a haven for his family, friends, and acquaintances. By extension, he also made Miami Beach the place to be. “All of a sudden, what was going on in L.A. moved here when Gianni came here,'' his sister, Donatella, once told The New York Times. “All the fashion shoots were happening here. Music people, fashion people, actors—he attracted everyone here. He had that power.”

Today, you have to be a guest at The Villa Casa Casuarina (prices range from $899 to $1,599 for the suites), have a reservation at the in-house restaurant Gianni’s, or visit its Onyx bar in order to walk past the gates and into the world that Versace designed, which includes everything from a 13-person shower, a rooftop for sunbathing, and a pool lined with gold leaf tiles. “Every time you come, you notice something different,” Chelsea Stromfeld, who does publicity for the property, says. “There’s so much detail it’s hard to pick it up in one swing around.”

Each room has its own theme and design. Guests can stay in Gianni’s double king-size bed, Donatella’s “Venus” Room, or the Parrot suite, which was designed for Versace’s niece who was reportedly obsessed with the birds. The allure and opulence of the mansion are unmistakable, but the charm also lies in the escapism it provides. Once you enter the main courtyard area of the villa, you feel like you're in your own little world. And that’s what appealed to Gianni about the property. “Gianni was an observer; he didn't miss a thing,” Donatella said. “And this was the right spot for him to see what was going on. Without being seen, because here you could hide yourself, but you saw everything.”

There’s one scene from the show that displays this pretty perfectly. It’s nighttime and a Donatella impersonator walks the expanse of Ocean Drive and up the steps of the mansion. “Baby, your sister's here,” she says, pulling on the locked gates trying to get in. Gianni then reveals himself from his upstairs balcony. “Baby, I’ve told you so many times, I can only handle one Donatella. One is enough.” He then escapes back into his seemingly impenetrable abode.

It’s particularly cruel, then, that Gianni was killed in cold blood on the steps of his self-made sanctuary. Those steps—relatively simple compared to the rest of the house—have now become a tourist sideshow, even though they're not a true representation of the designer's over-the-top flair. Yet, just past those stairs, the wild, flamboyant beauty that symbolizes the House of Versace lives on in the house itself, guaranteeing that though the man himself might not be here in anymore, his legacy lives on.

Check out some images of the property in the slideshow, below.