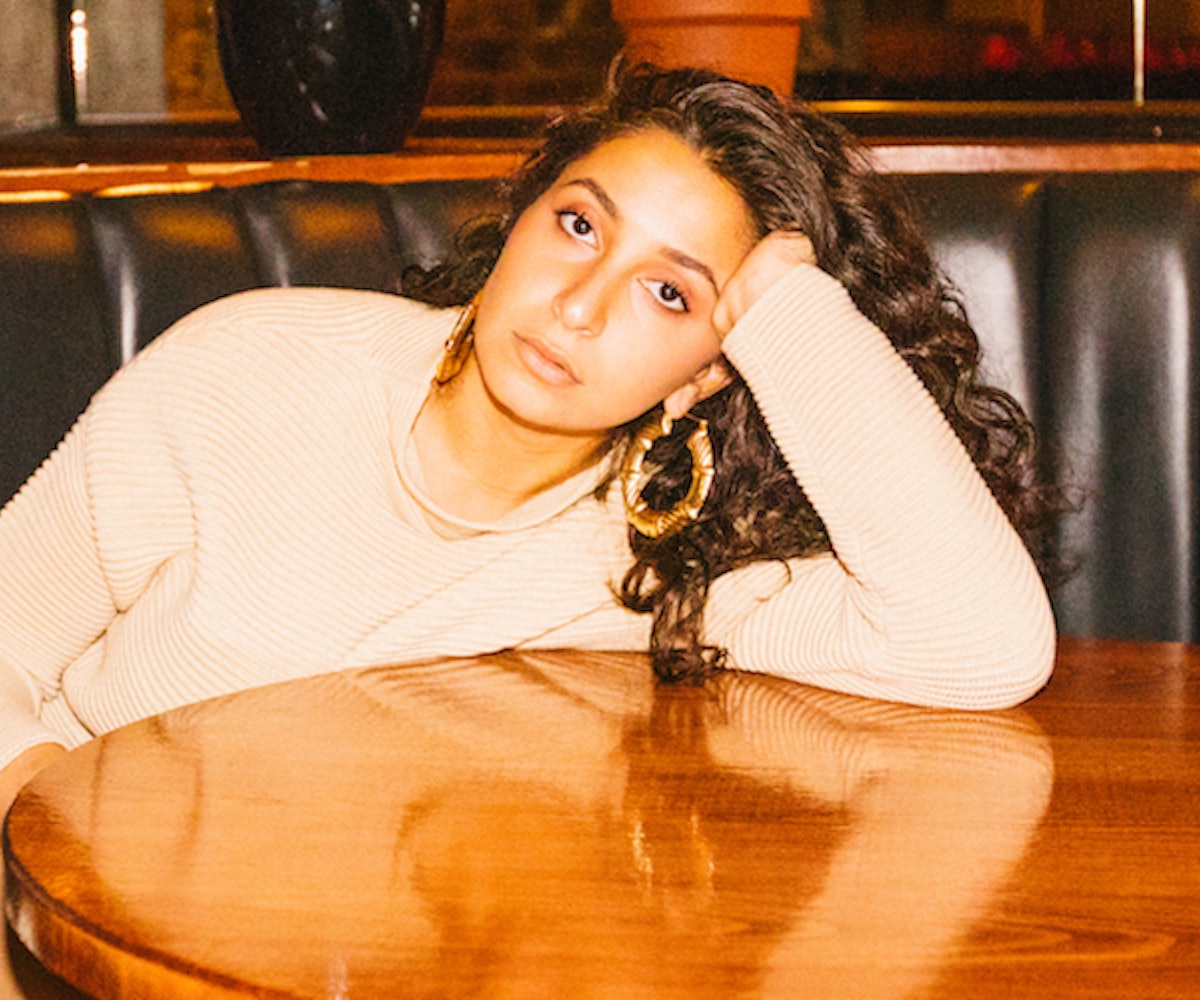 Considering the fact that Wafia Al-Rikabi doesn't even have a full-length album, the buzz surrounding the 24-year-old singer is remarkable. Hot off the heels of a bombastic performance of "Better Not" with Louis the Child during Coachella, Wafia stopped by the NYLON offices to talk about her sleek brand of "purposeful pop" and meditate on her place in the world as a queer, Muslim woman of Iraqi-Syrian descent. Make no mistake though, while Wafia tackles some heavy, salient issues, you'd be forgiven for almost forgetting that there's a deeper, much darker message underlying her music. Armed with a euphonious voice and a penchant for brooding synths, she's already gotten the co-sign from prominent electronic indie tastemakers at Future Classic and garnered rave reviews from critics—so you know she's the real deal. And imagine, this is only the beginning for her. Get to know the rising talent via our Q&A, below.

Tell me a little bit about how you started songwriting and singing. You used to study biomedicine, right? Why make the switch?

I really started writing my own songs in second year of college. It was a way to procrastinate essentially from exams and assignments. I did that for a bunch of years, and then I was putting out a lot of covers in the meantime. But it wasn't until I had a song called "Heartburn" that I felt comfortable with releasing my first original.

I have really supportive parents as well, so that really helped. I feel like, if my parents hadn't been supportive, I don't know if I would've done it. My parents are really chill. I think my dad always wanted to be an actor growing up, so he kind of gets the whole artistic thing, whereas my mom is a little more wary about financial security and feeding myself and stuff. But when my songs started to be in some Australian TV shows and in movies, that's when she saw that it could be a thing.

Do you notice any themes between what you are choosing to write about?

The only common thread for me is that it's always honest, and that's always something that I've just been through. I feel like I used to write from a very serious place, and that was good, and I really wanted a lot of my sounds to be very dark and ominous, and I feel like there's been a growth in the last year, where I'm more receptive and open to things that sound more fun and happy but still entice some sort of emotional reaction for me while I write it. I find that I'm just exploring different things now.

Do you really feel like “dark” is the right word to describe your music?

I feel like the beginning of what I used to make was always like, "Oh this isn't dark enough," but I guess, just slightly, there's been an evolution, in my mind at least.

Why do you think that's the case?

I think there's enough darkness in the world.

So what do you think about the term "purposeful pop" and the fact that people tend to apply that to your work?

It's cool. I guess it gives me meaning. I can't imagine making something that didn't have meaning to it, at least to me. Even if doesn't make sense to other people, at least to myself it has a purpose. And as for pop, I don't think it is a dirty word, so I'm not offended by that at all or anything. I just like to make stuff that maybe you can dance to, or at least sad dance to.

The idea of “purposeful pop” is pretty big weight to carry.

I guess, I don't really think about that much, because I don't feel like I do need to carry the burden of what I talk about. I don't feel like I need to carry all the weight all the time. Me existing to some people is enough of a statement, you know what I mean? Just my existence offends some people... I'm Muslim, I'm Arab, and that, to some people, is like, "Ehhh, maybe I'm not down for the cause," and that's okay. But when I hear things about a Muslim ban, I don't feel wanted here, and I know my family isn't wanted here. So I'm going to make music that sometimes is political, and sometimes I'm gonna make music because it's fun. I'm not one-dimensional, and I don't have to exist in one sort of state for people to be okay with that, and I'm fully comfortable with that.

I loved your video with Alli Coates. How did you start working together?

I was a Tumblr kid, heavy. But actually, I met her because one of my managers is super into just creative things and is always sending me people on Instagram, so I think she came across Alli's work that way and was just like, "I think you'd really like her, and I spoke to her a couple times, and she seems really cool." So she organized a coffee for us, and Alli just got it right away. We just started talking about stuff, and we just ended up crying. I had a real connection with this person right off the bat, and I knew that I trusted her taste and her aesthetic, so I was like, "Let's just make something together."

What do you think made you guys cry?

She just got it. And she never belittled my experience—just always made me feel supported and comforted. What I said to her would be safe. Even just that my creative ideas were worth value. And even though I don't exist in the visual world, she was down to accommodate to me and what I'm comfortable with, and that transpired through the conversation and then, later on, set when we were actually filming the videos. She was just always down for making me feel comfortable, and I belonged wherever I was.

What you're writing about currently?

I'm just exploring different sounds and trying to write about things that I haven't before. But, in terms of production, I'm just having a lot more fun with it. I've always been involved, and I've always handpicked the people that are a part of the project, but I feel like I'm really in there producing particular songs, and I'm really proud of that role and going into that position. Now that I have music out, the people that I'm bringing into the project trust me, because they've heard music, whereas in the past, I hadn't had a lot of music to refer them to and so they were hesitant. Now, I feel like I just have a lot more ownership as well—taking charge of the sessions and all of that. Even though they've always been my own and I always know what I want, I think speaking up in the moment has been a really big thing for me, and it's really made the record a lot more cohesive, and I'm really excited about that.

Do you think you'll ever start producing?

I feel like the term producing, we generally associate that with someone actually sitting at the computer, and I don't find any enjoyment in that. For me, I enjoy going up to a person and just being like, "Can you give me chords that kinda sound like this?" and give them a point of reference. And then going up to the person doing drums, because they always have better sounds than I do, but I know the sound that I want once I'm given a bunch of options and give them a starting point or like a reference... I'd rather be in it and just bouncing off everyone else because I also have to write the song. And sometimes when you're actually just actually producing—which I have done a bunch of times myself—you get really stuck in the loop. So just sort of standing back a little bit and sort of commanding the room better is more my vibe.