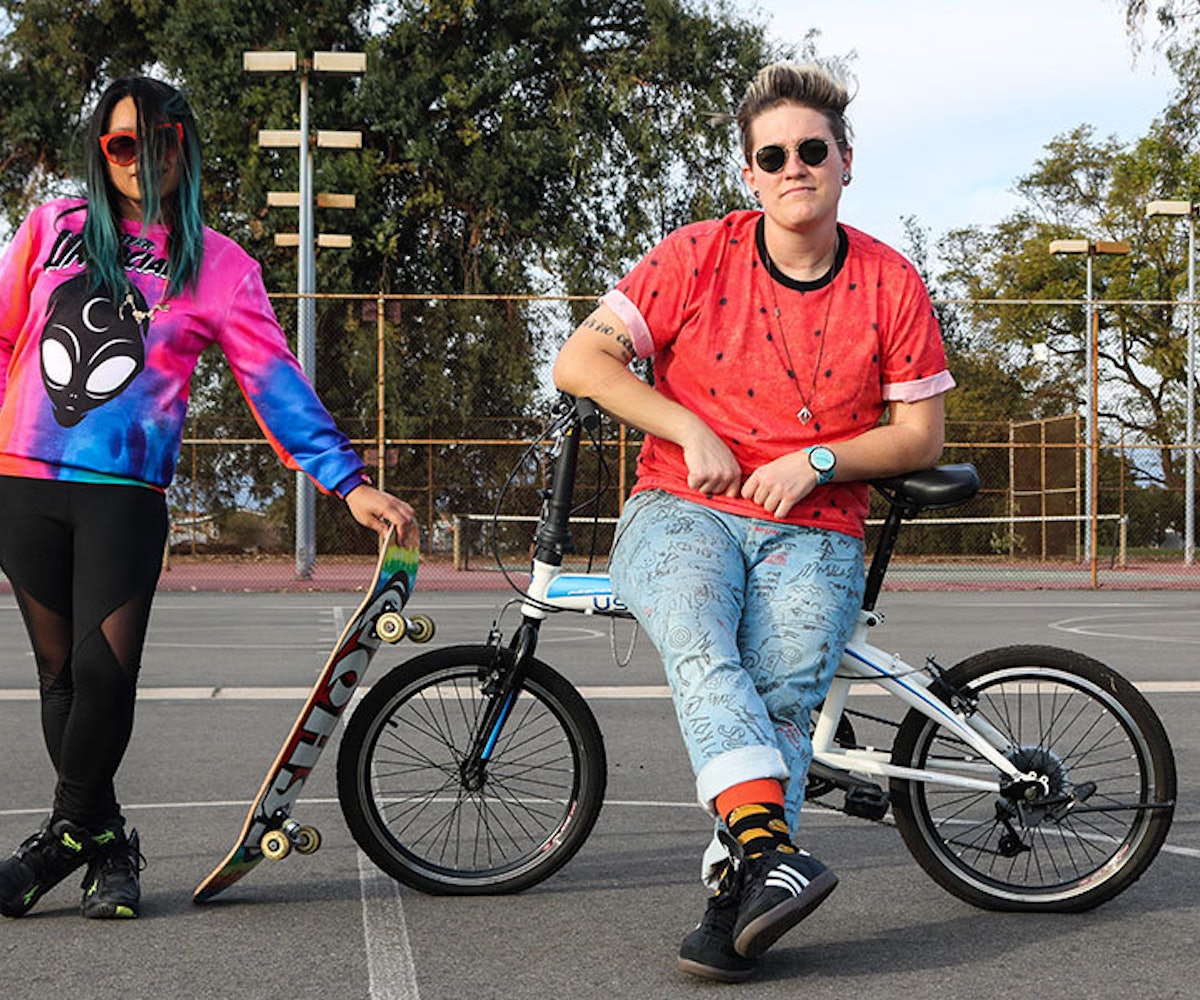 Working with your partner has the potential to be a nightmare, but it can also be a dream if, you know, you're actually good partners in more ways than just romantically. Case in point? L.A. riot pop duo WASI.

As WASI, Jessie Meehan and Merilou Salazar foster a safe, loving space between themselves that allows their relationship, as both business and romantic partners, to flourish.

The two met in high school, at a time when neither was yet out of the closet. But still, the bond was ready to be built after Salazar approached Meehan, asking if she wanted to be in a band. The rest is pretty much history. Meehan said yes, and they started making music together, all while trying to figure out why there was tension between one another despite "working together as best friends." This went on for four-and-a-half years before they eventually realized they were into each other.

However, their home base of Orange County, California, was not terribly open-minded to queer people. At the time, it wasn't all that open to DIY feminist communities either. So, they packed up and moved to Los Angeles where Salazar says, "I didn't even know I was unsafe in a community until—" "Until we felt safe!" Meehan finishes Salazar's sentence.

For WASI, music isn't just a vehicle for community building, it's another way to keep the communication between each other open. A self-described introvert, Salazar often uses songwriting and music making to get a point across or make sense of something that's going on around her. As the couple collaboratively begins to address whatever big picture problem they're trying to figure out, they also work with an understanding that if either of them is feeling any particular way, it's probable that others out there are feeling that way, too. It's a big responsibility to approach your art that way, which is why, for WASI, there are no off days.

"Even when we go on a hike, we'll find a cool spot for a nice photo shoot or a video shoot we'll then return to, to make it happen," Meehan says. "I think taking care of yourself, your partner, and also being receptive the world is considered working." With this in mind, the duo endures the highest highs and lowest lows together. "While we have our completely different perspectives on what we've experienced, we still always find a way to relate to one another," Salazar says. "It has all shaped who we are as individuals, as musicians, and as a couple."

Stranger California, the duo's third EP, is an ode to all Los Angeles has brought them. Though short in length (three songs, to be exact), the EP is a moving document of their relationship with and in the city; from their experiences at underground parties where they've discovered and rediscovered their queerness to coping with loneliness, WASI proves the strength of their bond with this EP.

"At the end of the day, despite any business spats, our favorite place to be is on stage, period," Meehan says. "That's when we can see our alternate true selves. We could be totally mad at each other about something before a show, but then we play a show, and by the end of it, we're on such an endorphin high because we love performing so much, the problems don't seem all that bad—the work we create together makes everything else make sense."