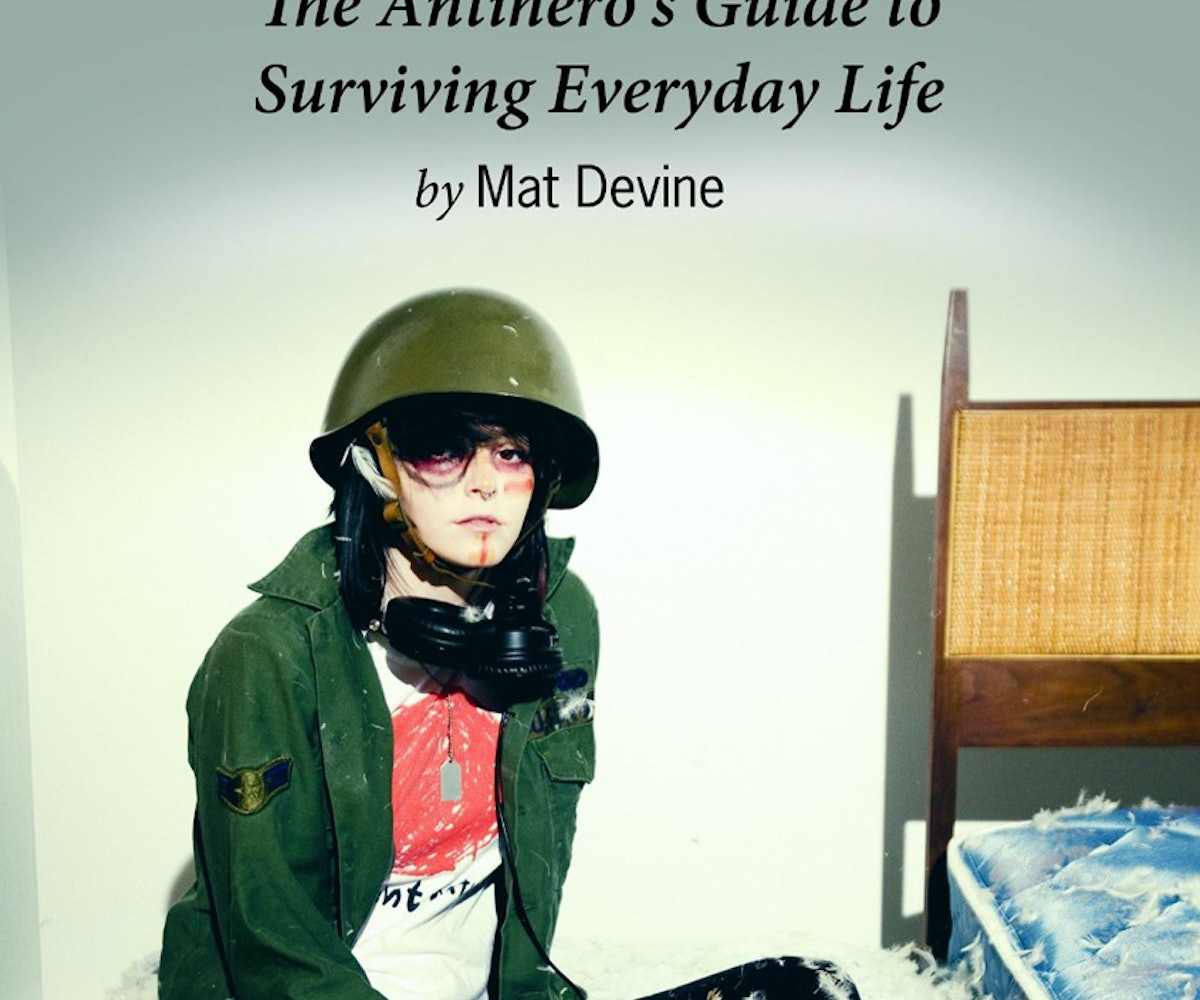 When rock stars put out books, you expect them to chronicle life on the road, band break-ups, drug-fueled meltdowns, and more. But in Mat Devine's case, he just wants to give you a little bit of life guidance.

What started as a tour diary for Fuse turned into an advice column after Devine, done touring, asked readers what they wanted to talk about. "Kids starting writing in questions, so it basically evolved into a Dr. Phil sort of thing--but for weirdos," he says. Fast forward and the column turned into a blog, and the blog turned into a book--Weird War One, which came out for e-books at the end of 2013 and is slated for paperback release in April.

Devine chatted with us from L.A. (en route to his first transcendental meditation class, which we totally want to get his advice on in the future) to learn about connecting with outsiders, pulling all-nighters, and never, ever conforming.

How did Weird War One begin?In the beginning the questions [readers] were sending were just fun and light, like, "How do I prank my brother?" "What's the best way to start a band?" But then people started leaving some really heavy questions, like their parents are going through a divorce or they're cutting or even some people being suicidal or bullying and heartbreak, things like that. So it went from 10 questions a week [in the comments] to sometimes we'd literally have 1000 comments. If I didn't answer them, a lot of readers wrote back and replied, and it fostered this really caring community. And then I would get friends from other bands to help me, like Tomo from 30 Seconds to Mars, or Amanda Palmer, or Benji from Good Charlotte. So these people writing in would see just how much we related to what they're going through. Then we brought it onto my own site, and then a year and a half ago I started writing op-ed piece for Thought Catalog. The president of Though Catalog said, "We're staring a publishing division, and if you pick the best of the best from your advice column, I think that would be a really interesting book."

Was it hard to pick what made it into the book?It took about a year to get it together, even though the majority was already written! And in the process, it ended up becoming a 150 page book. As a body of work you realize, oh man, the people who are writing in are all different ages and from all over the world, and you see how universal these themes are. And then also with the book they thought it would be cool if I included a photo section of unreleased pictures of me from that period in my life when I was the most weird [laughs], those transitional years when you are trying to figure out who you are. I wrote my mom, "They need pictures of me looking weird and awkward in high school." And she said, "There's so many--how many do you want?" It's just cool to see everyone, especially my favorite musicians, because we were never the popular kid, life was never easy--if it was, we wouldn't turn to music and art so much.

Before you started writing your column, were you the guy who all of your friends turned to for advice?

No! In fact, it makes no sense that I'm giving advice; it just happened that over the years, just by experience, I've ended up having a lot of insight to share. A lot of these topics are way outside of my scope, so I then would call experts or I would call friends and talk all night. Some of this stuff is super-sensitive, so I would have to do my research, and in the process of that research I just had much more empathy for the struggles in these kids because [it's like], I'm the lead singer of the band, why are you asking me about these things? But then I realized that they don't relate to their parents, they don't relate to their teachers, there are no real resources online that aren't painted by some religious bias. And so now I look at it and it makes perfect sense.

How were you able to be in a band, be on the road, and be this person responding to other people's problems--and then writing it all up?!

That's a great question. Because I was crushing up Adderall just to get through this, because I went back on tour so the only time I could write was in the hotel room after shows, while the band's sleeping! [Laughs] In some cases, if I would answer five questions that would--believe it or not--end up being 10 pages.

So...does that mean that there's enough content to fill a second book eventually?!

Weird War Two is going to be a book based more on those anecdotes from the road. I'm doing promo for this book, and then this is going to come out on paperback in the spring. And meanwhile I have a solo record and all this other stuff musically that's going on!

How are you able to juggle all of these different things--especially considering that they're all pretty creative endeavors that require a ton of energy and focus?

I'm lazy, so it is hard for me, but the funny thing is you sound silly complaining about it. I was always into art classes, I went to art school, and when I was in art school I'd take one class in music, one in painting, and one in film. And I was never happier than when I was doing all that. So I look at myself now as an adult and I'm just expanding art school. If I'm busy then I'm lucky I'm busy--and the minute I think I'm working hard, I hang out with someone like Amanda Palmer and I feel like an idiot for thinking that I'm busy, because she's doing 10 times more. Or hanging out with Kat Von D, who has a blurb in this book, and she has a clothing line, a makeup line, a music career, a TV career, and also tattoos! I can't complain.

So what's the best advice that you've ever gotten?

In general my sister was kind of my idol, and I always had crushes on her friends and stuff and she was like, "Just don't be an asshole. Every dud in the world is an asshole, just be yourself." And that's just the common thread and backbone of the whole book: The people that are the most original and the people that the world needs the most are usually the people that are targeted and therefore lead tougher lives. There's such a tendency to conform because it would make your life easier if you would just smooth the edges and stand in line with everyone else. But the best advice that I could give is to always stay true to what make you original, even though it's a tougher course.

Pick up a virtual copy of Weird War One here.