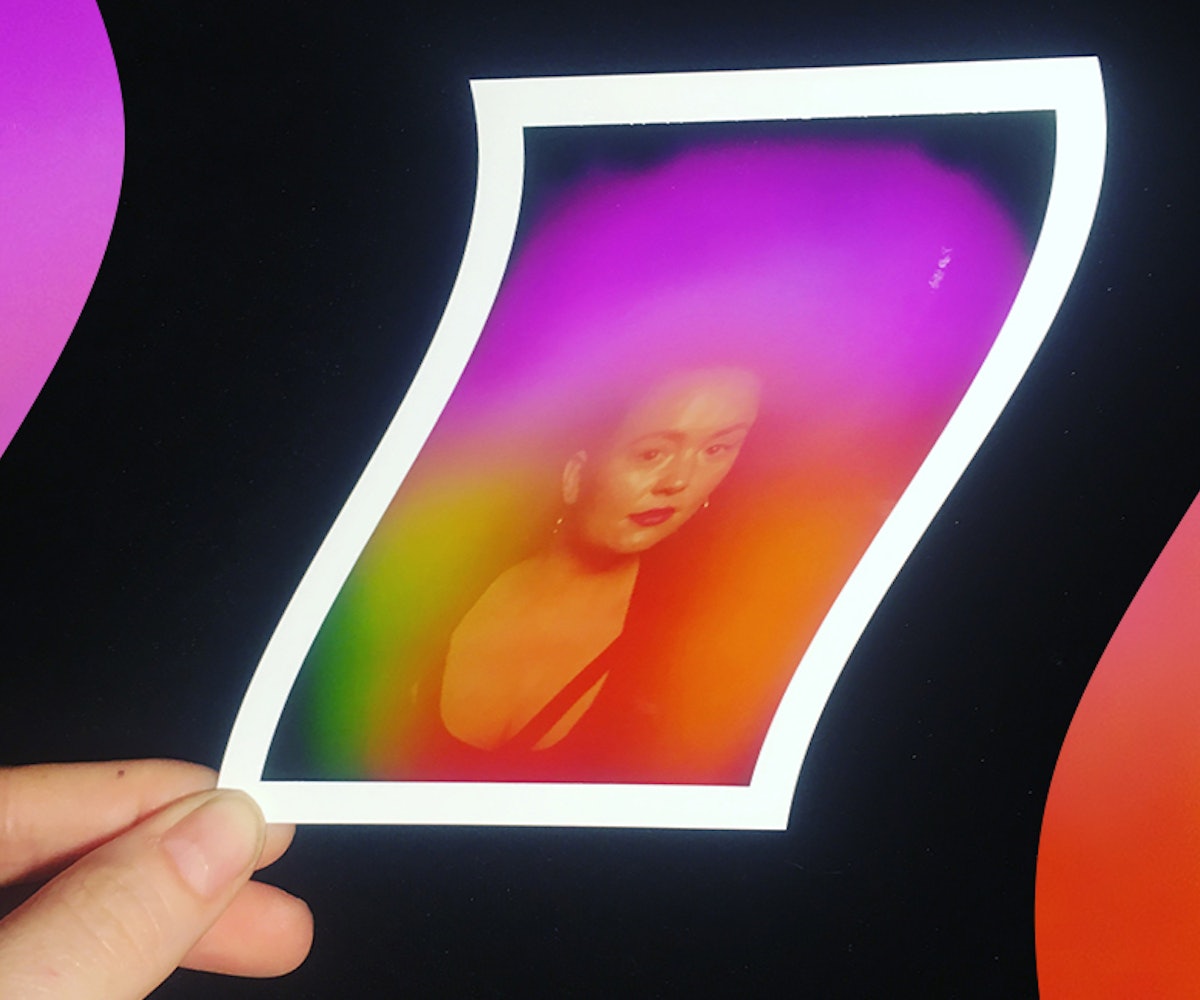 If you're like me, you probably spend a pretty healthy amount of time on Instagram each and every day. And by healthy, I don't actually mean healthy, but rather a lot. During all that time spent scrolling, I've noticed lately that my feed has been inundated with far more than the basic brunch layout and washed-out selfie—now, it's all about the aura polaroid. But what's behind these satisfyingly color-blotted filtered pics? I had to dig a little deeper to see what this Instagrammable trend is all about.

While many people and places claim to be aura experts, there's one person widely acknowledged to be the queen of contemporary aura photography: Christina Lonsdale, the woman behind Radiant Human, “a roving, fully adaptable aura photography laboratory; an immersive salon of extrasensory image-making." Lonsdale sees herself as a visual artist, an interpreter of auras, telling me, “I foster the ephemeral and make the metaphysical tangible."

I hopped on a call with her so that she could shed a little light on the current photo trend that's taking social media by storm, and also to hear what she thinks these aura photos divulge about their subjects.

“The study of energy and the electric current that goes through our bodies has been around for a really long time, but this specific camera [the one used to take these aura photographs] was invented in the '70s; it's hand-built and it's very rare," Lonsdale says. “It has traditionally been used in crystal shops and psychic fairs. What I was interested in doing [when creating Radiant Human] was using it as a tool to explore the human atmosphere in a really open-ended way." She makes a point of relaying her interpretations as open-ended because where other aura photographers will try to convey that the colors are tied directly to past, present, and future, representing the role of a healer or a psychic, she takes the approach of an artist, simply helping to get the meaning of the present moment across. “When taking these photographs, I use a portrait practice to conceptualize energy in a way that I think is really important for the time period that we're in," Lonsdale says. Her coined term for her powerful conceptualizations of present energy that's captured so perfectly, making for incredibly shareable content? Self(ie) actualization. “I think it's really fascinating that we broadcast so many images of our lives through social media, and so to be able to see—and share—an image of yourself with your real energy, I think that is so powerful," Lonsdale says.

So, how do these auras manifest in photos? Lonsdale explains that an aura camera is a hand-built machine that uses bio-feedback to capture auras.

“As human beings, we radiate energy all the time, and that's why these images are so exciting," Lonsdale says. “When we're talking about good vibes, bad vibes, weird vibes, we're referencing vibrational frequencies. We read energy whether we know it or not. It's a part of being human, and some people are much better at it than others." She goes on to explain that what she loves most about this project is that it makes interpretation of energies more accessible because it allows us to recognize and own it in a way to say, "Yeah, this is who I am, and this is what I'm radiating." “This camera is able to identify the body's electricity and apply that to a color, because the way we see color is through a wavelength, and so it's just matching wavelengths—you're always creating color with your vibes," Lonsdale says. “What this is actually doing is translating your energy into a color so that we can see it." So it's like Snapchat—basically an overlay filter.

Lonsdale explains that her pictures tend to look different than most. “It comes to me being an artist and my own techniques,” Lonsdale says. “There’s a finesse to it—the same way there is with traditional photography. It’s not about altering an image and losing integrity, rather it’s about being skilled with the particular camera. A Dutch painter that’s using the same set of oils will come up with a different quality of painting depending on their skill. It’s the same with this.”

And so, for the past four and a half years, Lonsdale has been traveling around with Radiant Human, interacting with as many people as she can, snapping 28,000 photographs to date. As a result, she’s created a crowd-sourced interpretation of how we find meaning through color. “I really wanted to draw the juxtaposition of the physical body in relation to the energetic body,” Lonsdale says. And with that, I started counting down the days to my own aura interpretation with the Queen of Aura Interpretations, which took place at a gala at Pioneer Works in Brooklyn where she was able to fit me in to be photographed along the likes of celebrities and socialites. All it took was ducking into her blacked-out aura dome, sitting up tall with two metal plates with hand outlines on my thighs and cords leading back to the camera, placing my hands on the plates, slightly angling my head while still looking straight at the camera, and holding the pose stark still for 10 seconds.

The result? A wash of solid purple above my head, an ombre fade of green, yellow, and tan to my left, and solid orange to my right. As Lonsdale took the time to interpret my image to me, it took almost all my energy to not cry right then and there; she was hitting every aspect of my current self and state right on the head. “When you’re dealing with your own energy, it reflects a lot of stuff that you could be surprised comes out,” she said. “That’s another really interesting layer of this project—there’s a lot of power when it comes to a stranger seeing you in a way that you thought was private.” What she saw as a result of the colors? An extremely goal-oriented person who works well with structure, someone who gets caught up in a perfectionist mindset and is often too hard on themselves (green/yellow/tan); a person who dreams big and whose unconventional mental energy is fully inspired by idealism, imagination, and the desire to please others (purple); and someone who puts forth an independent, creative, dynamic, collaborative, adaptable front—someone who’s not afraid of a challenge (orange). And, as a self-proclaimed introverted extrovert who has always prioritized chasing her dream, encountering imposter syndrome and other self-critical moments despite making the world believe everything is okay along the way, it couldn’t have been more spot on. And, having somewhat of an exhausting anxious rut over the last couple weeks, being able to see myself so clearly, in not just black-and-white but beaming color, was nothing short of an eye-opening sigh of relief. After all, like Lonsdale said, it’s about recognizing and owning it.

“Really what I think is so exciting about this project, through the social media lens, is that pictures are worth a thousand words, and if we’re able to see a whole community of people that believe in energy—and it’s not even about believing in it because that’s like saying we believe in gravity—if you’re able to really embrace the idea that we’re broadcasting energy and really own the energy that you’re putting into the world to make it a better place, it’s a certain community that I want to be a part of and am excited to be a part of.”