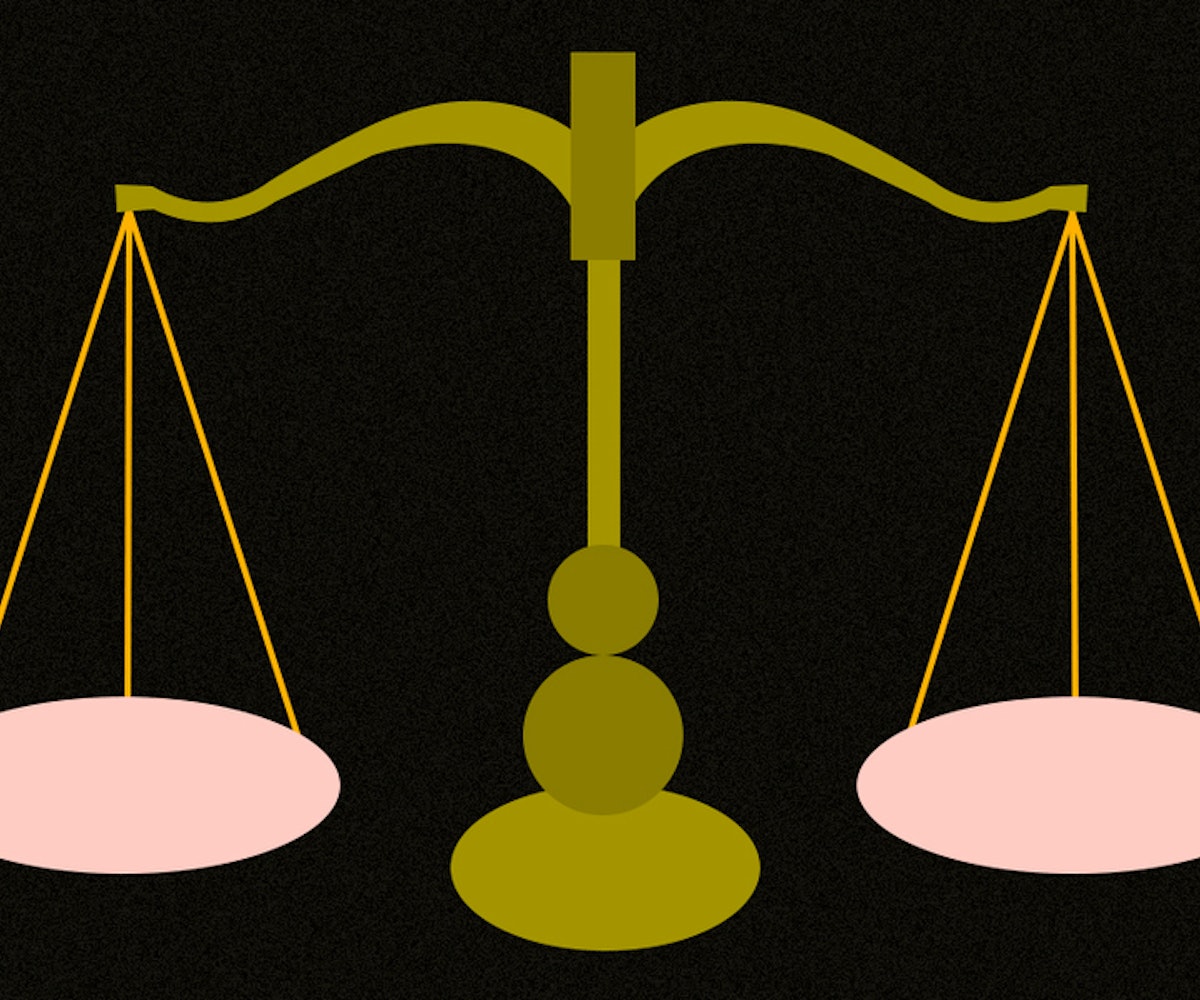 As one does, I was catching up on old episodes of Who Weekly? recently, and was reminded of the existence of actress Catherine Zeta-Jones' home design collection, Casa Zeta-Jones. (I encourage you to check it out on Instagram; there are nine posts, total.) Though on the podcast, Bobby and Lindsay quickly moved onto something else, my mind stayed stuck on CZJ—not the QVC-exclusive linens, but the actress, because there's only one kind of person who could pull off naming their debut line of housewares something like Casa Zeta-Jones: a Libra. And that's because a Libra really is That Bitch.

Are you unsure of who, in your life, is a Libra? It's pretty easy to figure out, actually. Just think about all the people you know who are the most resolutely, manifestly themselves. These are people who are often described as being able to get away with anything. These are people who are excellent at flirting. They excel at small talk, but in a way that doesn't feel impersonal; small talk for a Libra involves them telling you every single detail of their lives, in minute detail, within five minutes of meeting you, because they are masters of casual intimacy.

Does that make you uncomfortable? Get over it. A Libra is too much fun to write-off just because you aren't used to this kind of aggressive honesty. Who else but a total Libra king like Bruce Springsteen would be able to earnestly sing about being on fire, because it's as if he had six-inch valley through the middle of his soul? Only a Libra could do that. But, you know, thank god a Libra could do that, because what a song.

Sometimes, of course, this level of sharing means a Libra says something that is, well, cringe-worthy. But the thing is that you're the only one who's going to be cringing. A Libra never cringes! Like, does Springsteen ever cringe? No! Or, does Kim Kardashian West ever cringe? No! Does Cardi B ever cringe? No! Does Gwyneth Paltrow ever cringe? No! That's because they move on. They get over it. They don't cringe, although, sure, they might smirk or shrug. A Libra loves to smirk and shrug! They'll smirk and shrug to show they get it; they understand your distress even if they don't quite share it. Because a Libra is always unbothered. After all, they know we all make mistakes, and that even when they make mistakes—like encouraging you to stick jade eggs inside your vagina—they're still just doing their best, and, ahem, your jealousy is—unfortunately for you!—really showing.

There is a part of every Libra that is perpetually arrested, developmentally. This is why they're often described as fun-loving and childlike. They enjoy games, whether this means they are almost surprisingly into sports or just like fucking with your head... well, that really depends on the Libra. But it sort of makes sense that Libras are this way, because a Libra was a really cute kid. And what's funny is, even if all the Libras in your life are adults whom you didn't know when they were children, you still undoubtedly know what they looked like as kids, because a Libra is the kind of person who has a million photos of themselves as kids, ready to show you at any time! When they feel like doing it, they really kill the #TBT game. (They don't always feel like doing it, though, because a Libra is actually able to relax a little; they're only on when they feel like it.)

But so also, Instagram is definitely a Libra's favorite social media platform. It's not necessarily the one they're "best" at (that's probably Twitter, because a Libra is hyper-verbal and witty and just the right combination of earnest and bitchy, meaning they shine on Twitter), but it is the one they love the most, because they love to get those likes. A Libra is not afraid of acknowledging that they need external validation, and they're happy to feed their fans by leaning even further into being who it is that their fans love, i.e. themselves.

That's why sometimes a Libra can seem a little like a parody of themselves (see: Paltrow and Kardashian West)—once a Libra knows what it is you like about them, they're eager to give you more of it. And more and more, until you kind of feel like maybe, just maybe, it's a little bit too much. But then you step away for a minute and realize you have a Libra-sized hole in your heart, and you go straight back for more.

A Libra, after all, really inspires devotion. (Is it a coincidence that the concept of a "stan" was invented by Eminem, a Libra?) And it's not just because Libras are easy to admire from afar, rather, a Libra inspires lifelong devotion, because they give it in turn. All of which is to say, a Libra is a fierce friend—the fiercest. Like, recently, I sent my Libra friend this tweet: "My vow as a friend is that even if you forgive your ex I'll still hold a grudge." And she wrote back: "Yes, that is absolutely me." Guess what? It is.

And yet, despite being ready to hate her friend's ex forever, a Libra totally has chill—it's merely balanced by the fact that they're also, like, extremely unchill. I mean, that's the thing with Libras, right? They are all about balance, which really means they're all about extremes, which really means they run hot and they run cold, and somehow, magically, that doesn't mean they're ever lukewarm, only that they're constantly feeling things—especially themselves.

Because a Libra really feels themselves. Now, this does not mean they're like those ego-monster Leos. On the contrary! Because while a Leo is sort of just this palpably hungry ego monster (with, admittedly, really good hair!), a Libra feels themselves in other ways—charming ways, seductive ways, self-aware ways that only seem to be un-self-aware, but are actually the most self-aware ways ever!

Like, a Libra is the kind of person who will listen to a recording of their voice and say, "I love the sound of my own voice." A Libra will also unironically call her ex-husband and the father of her two children "her brother," and make him pose in a photo with her new fiancé. A Libra can sing the lyrics "Hey little girl, is your daddy home" and make you want to die of horniness. A Libra will rock a chipped front tooth, waiting a day to get it fixed after accidentally knocking a cap off while having energetic sex with a celebrity chef; she will do this just because you tell her she looks adorable, and she realizes she totally does.

And a Libra will design objectively hideous home accessories for QVC and then give it the most absurd ever name in the history of celebrity "designed" product lines, just because she can. Just because she is That Bitch, the seductive, unbothered, truth-teller of the zodiac, with sometimes questionable aesthetic sensibilities. What's not to love?