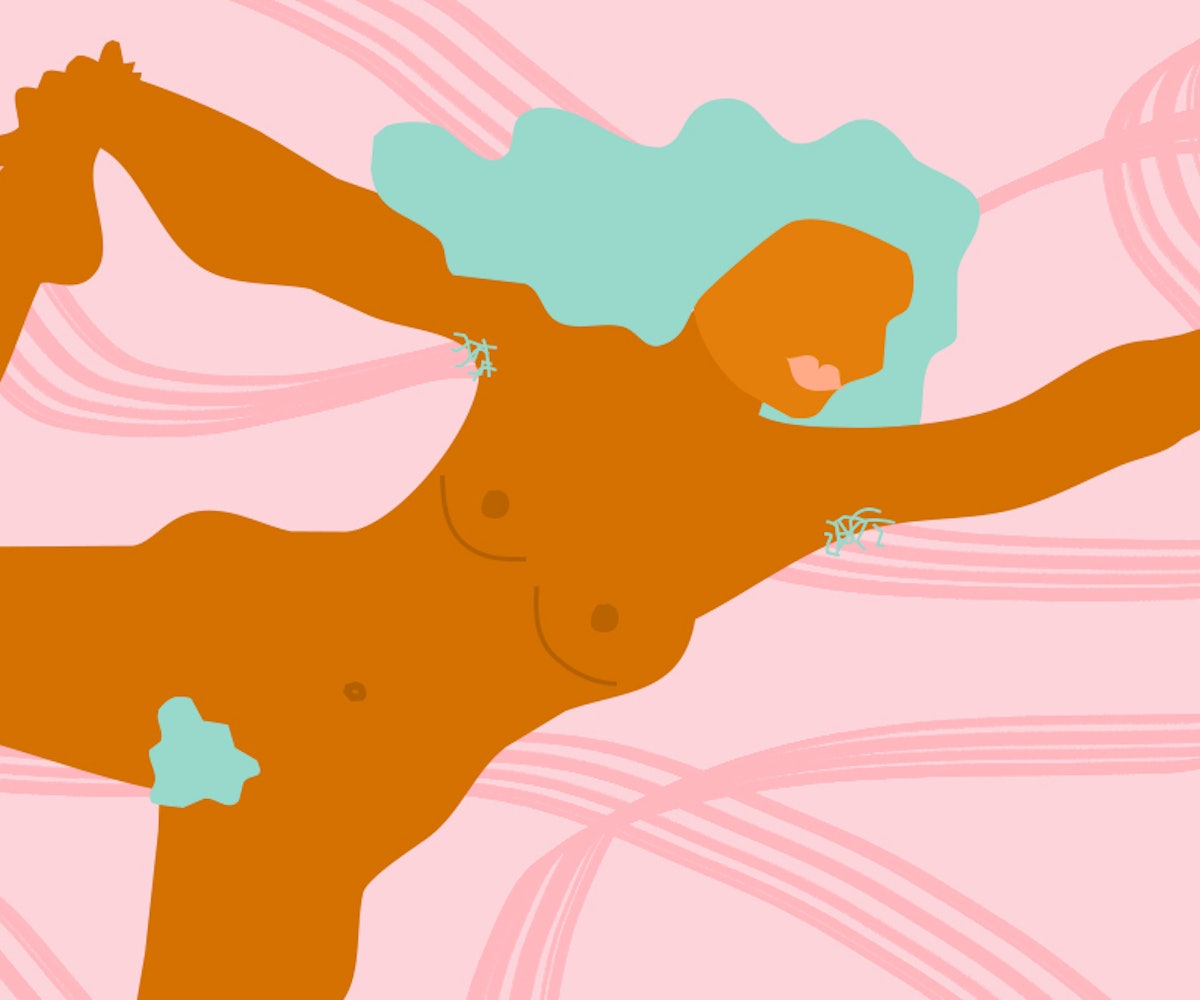 Like a lot of other people, I’ve struggled with body image issues. Despite fluctuating in shape, size, and weight over the years, I can’t say I’ve ever once in my life felt completely comfortable or at home in my own skin—at least, never in a bathing suit, let alone naked.

About a year ago, I finally decided that enough is enough; I was going to do everything I could to build a better relationship with my body. Ever since that moment, I’ve tried all sorts of methods and techniques to learn to love and accept my body more. But if there’s anything I learned from a recent (and pretty damn magical) interview with Iskra Lawrence, it’s that sometimes we need to push ourselves beyond our comfort zones to really face our fears—and our body woes—and finally get past them. And, well, I wasn’t really pushing myself at all.

That’s when I discovered naked yoga.

Yes, naked yoga is exactly what it sounds like: a yoga class where everyone, including the instructor, is completely naked. In my search for a New York City studio that offered classes in the nude, I stumbled across Naked in Motion’s website and was immediately intrigued. Despite what most of my friends initially thought (on top of the general “WTF?!”), naked yoga is not a weird sex cult. It’s not a nudist meet-up. And you’re definitely not going there to snag a dude’s number.

Owner and founder Willow Merveille, who teaches many of the NYC classes herself, started Naked in Motion as a way for attendees to develop kinder relationships with both their minds and bodies. After struggling with self-criticism, as well as watching family members struggle with body image issues, she developed her class to liberate and empower attendees, bringing them one step closer to truly loving and accepting themselves for who they are.

As positive as this class sounded, I'd be lying if I said I wasn't nervous. I stepped into the studio for the Wednesday evening class trying to pretend that I wasn’t internally freaking the fuck out, threw my mat down, and got settled (whilst clothed). I was the first one there; slowly, other attendees began to trickle in. A note: I chose to attend the class that’s open to all. Naked in Motion offers women- and trans-only classes, as well as a queer-only class, but based on my schedule and desire to really push myself beyond my comfort zone, I decided to go with the general admission.

To my surprise—and okay, to be honest, at the time, utter horror—the class was mostly older, cisgender men. And 90 percent of the attendees seemed to be regulars, all greeting each other and casually catching up. One of them brought Oreos for everyone to enjoy post-class. I gulped as I felt a full-blown panic attack coming on.

This was my moment to really push myself (ahem, scare the shit out of myself?), and hopefully emerge a more confident, body positive being. But throw in the fact that I’m not the most masterful yogi to ever exist (very far from it, actually), and my anxiety was through the roof.

We all sat down on our mats, fully clothed, as Merveille began reading out the rules. She went over everything from the obvious—consent and anonymity—to the “no cruising” rule, aka no asking anybody out after class (it’s a yoga class, and it’s not meant to be sexual in the slightest). She emphasized the level of respect expected in the class, touching on everything from being aware of your gaze to asking everyone for their preferred pronoun. She even answered the “erection question,” which, yes, means it’s likely non-sexual erections will happen. And that we should just ignore them.

In short, Merveille reaffirmed that this class was a safe space.

Now slightly put at ease while simultaneously more terrified, we all undressed. Women and trans folx are allowed to keep their bottoms on during class if they please, but I decided to just go for it. Off everything came.

And there I was. Fully naked. In front of 20 or so strangers, who all seemed to know each other, no less. As my body moved through the poses—chair pose, lunges, warriors, and more—I was fully aware of the way my body looked and felt as it bent and flexed in various directions. Every roll, every “problem area” on full display. I felt vulnerable, but, at the same time, I felt free. Within five or 10 minutes, I simply stopped giving a shit. And it felt really, really good.

There’s something to be said about seeing yourself in downward dog position completely in the nude. As I stood there breathing, I was staring my thighs in the face. Watching the muscles flex, I found myself looking at them differently. No longer were they my “Italian thunder thighs” as I normally not-so-lovingly referred to them as, the ones that would never allow me to have the thigh gap I dreamed of in my early 20s. Now, as my eyes followed each defined muscle as I held the position, flexing ever-so-slightly every time I shifted my weight a bit, I thought to myself, These thighs are strong, and they’re beautiful. Cheesy, sure, but true.

By the time class was over, I honestly didn’t even want to put my clothes back on. I was surprised at how quickly my outlook had changed. As a colleague I saw immediately after the class ended confirmed, there was a definite difference from when I walked into the studio to when I left.

Not only was I glowing, but I was also way relaxed and more at ease. Of course, regular yoga will do that to you, but I also had this newfound confidence that I hadn’t had in years. And weeks later, I’m still feeling it. I’ve found it much easier to get into a bathing suit and look at myself in the mirror. I look at my body from a different perspective now, from a place with a lot more respect now that I’ve fully watched it in action without a pair of leggings sucking me in.

Sure, it wasn’t a cure-all, but the difference it’s made in my confidence is truly astonishing. And that’s why I recommend everyone who suffers from body image issues to give naked yoga a chance.

Even if you’re not ready to bare it all in front of a class of 20 or so others, try it yourself at home. Get to know your body, all of its little “flaws” and “imperfections,” and watch it move. Watch it bend, and watch it flex. I promise you’ll begin to see it as the powerful, beautiful thing that it is.