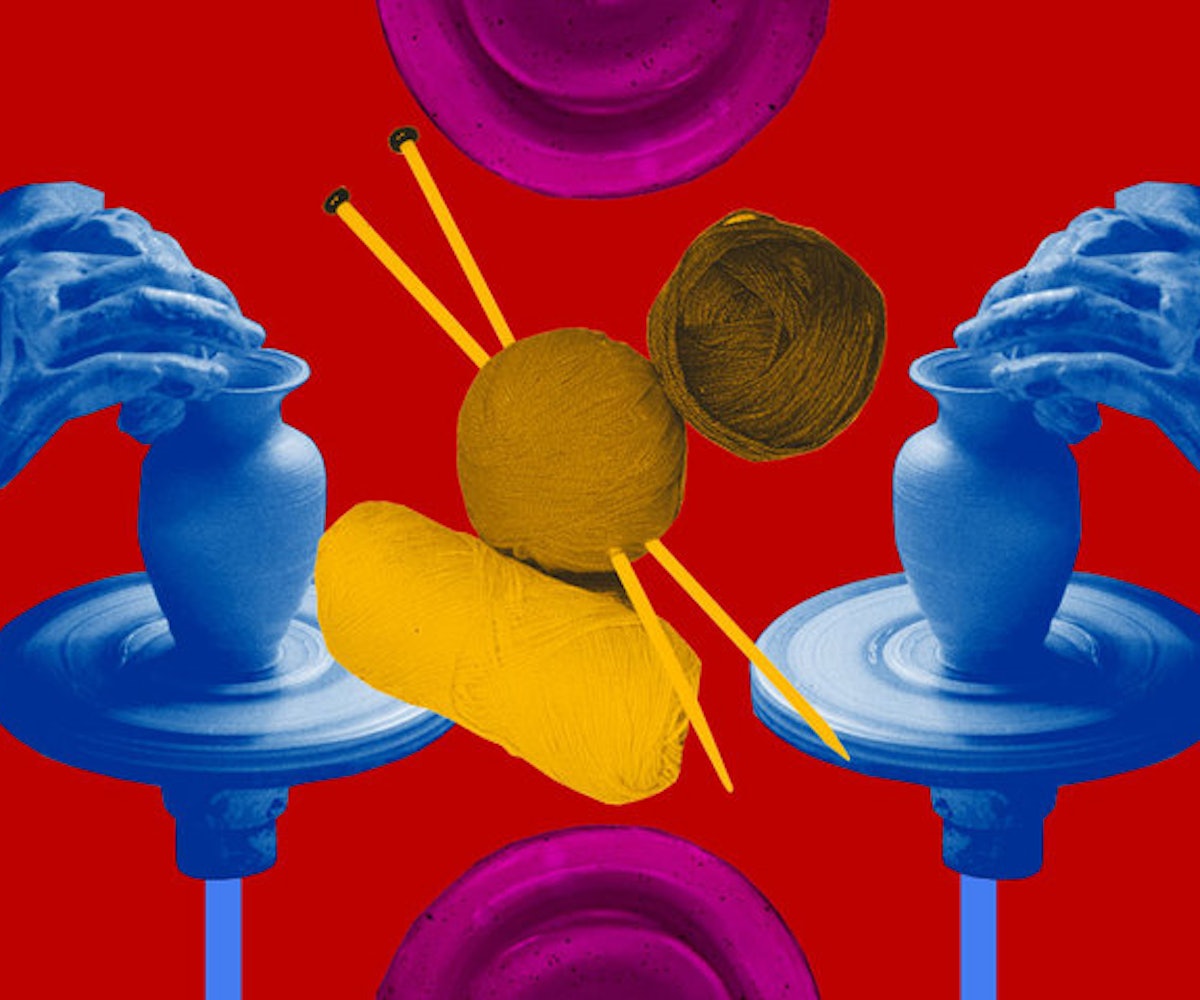 It was hard not to smile, though maybe it's more like I smirked. But what other response is more appropriate when your teacher tells you and the dozen or so other students, also straddling not-yet-spinning pottery wheels, that "it's more fun when it's wet" and the most common mistakes are going "too fast" and letting things get "too dry"?

Or maybe I was just nervous and also a little more prone to hearing everything as a metaphor, which is, like, a really bad state to find yourself in. And yet, on the Sunday afternoon I found myself taking an introductory wheel throwing pottery class at Brooklyn's Choplet ceramics studio, I already felt like I was in a semi-continuous state of spinning, like one wrong move or any slight adjustment could take me from upright to crumpled, into a state where the only thing to do was just admit that everything was ruined and start over from scratch. See? Things were bad.

But I was convinced I could make them better. Or, at least, more beautiful. And so it was with visions of crafting perfectly glazed mugs with comically oversized handles and the sort of hand-hewn ceramic plates that dominate my Instagram feed that I signed up, pretty convinced that within the class's three-hour time span, I would have at least mastered the wheel, and definitely have made the sort of things I'd soon be putting on my own Instagram.

That dream was pretty quickly squashed when the instructor warned us all that any idea we had of making a set of plates for ourselves so we could avoid a trip to Ikea was the wrong way to think about being here. "You're not going to be good," he pretty much said. "But that's okay." And though I am not usually the sort of person who thinks it's okay to be not good at anything, it took about two minutes before I relaxed into that idea (I was helped along by a tiny disaster in which I forgot how to stop the wheel and almost sent my initial blob of clay flying into the wheel of the person sitting to my left; don't worry, I caught it just in time), and forgot about anything else troubling me, and just focused on what was in my hands, what I did and didn't have control over.

Control, of course, is a joke. It is maybe the biggest joke right now, when uncertainty about the future, and even the present, seems to dominate the consciousness of everyone I know—it definitely does mine. Helplessness is a major conversational theme among my friends; it's a feeling that's pervasive in almost all areas of our lives. Whether within personal relationships, where ghosting—a relationship-ending tactic which is a reminder that, no matter how intimately we think we know someone, we have no control over how or when they will leave our lives—is prevalent, or within the professional sphere, where pretty much everyone I know feels a level of insecurity in their jobs, a lack of control is a huge problem. And then, economically, I mean, does anyone but the 1 percent feel like they've totally got a handle on their finances? Or, you know, let's not forget the big orange elephant in the room. There's little doubt that now is a time of huge socio-political uncertainty, during which the rights and freedoms of countless Americans are threatened. Even a nuclear war that we'll first hear about on Twitter isn't off the table.

It makes a certain kind of sense, then, that people are now flocking to crafting activities, whether ceramics or knitting or painting, just as they're filling their apartments with houseplants. In the same way that keeping something alive—even when it's just a plant—gives us a feeling of accomplishment, making things with our own hands gives us a sense that what we do in this world matters, that the time and energy we invest in our work actually manifests into something tangible. Or, as Alanna Okun, a senior editor at Racked and author of the forthcoming The Curse of the Boyfriend Sweater: Essays on Crafting, tells me:

It's really rare to actually have something where you can put in a certain amount of effort and get the corresponding results. You can call it metaphorical and have all of this meaning attached to it, but at the end of the day, it just is what it is—very calming, very rhythmic, very meditative.

Okun and I recently spoke about what she gets out of crafting projects; she's, after all, been knitting for 20 years. She says, "Everyone wants control no matter what, but right now, in particular, there's a real hunger to be able to sort of be like, [I can make] the universe looks the way I want it to for one second in this one tiny way." But Okun cautions against making any sort of increasing interest in crafting into something more important than it really is, explaining:

It's not to say that I knit to stave off this creeping existential crisis, but I do think that these ways of getting to be in the present moment, like not feeling like, Oh my god, what have I done wrong that I should correct? Or, Oh my god, what's going to happen in the future? Where instead it's just, like, nope you literally have to focus on these stitches, on this thing directly in front of you. It's just a way to pull me back into myself.

This was a feeling I had, too, when I was folded over my pottery wheel, hands coated in wet clay, unable to look at my phone or think of anything other than what was going on directly in front me. If I had allowed myself to be distracted by dwelling on recent personal upheaval or more general uncertainties, I would have completely ruined the little bowl I was working on, and all the patience and care I'd put into it up, until that point, would have been negated. It's not that I was making some sort of masterpiece, but I was making something, and I'd only be denying the worth of my own effort if I didn't see it through to the end. And in that lay the dual appeal of having to acquire a new skill from scratch, something I hadn't attempted in years, and the realization that this process of learning would be something specific to me; this was my work, and the end product would be a result of my efforts. I would be fully accountable for any progress I did or didn't make. Nobody cared what I was doing; this hobby was detached from anything other than my own desires. It was liberating.

This sense of ownership was something that Marian Bull, Food and Travel editor for GQ.com and incredible ceramicist (who also practices at Choplet), mentioned to me, too, when I asked her about what the art form means to her:

Ceramics has become incredibly precious to me, and I think I can break that down into a few reasons/causes. First of all, it's completely unrelated to every other aspect of my life, so it feels like something that is really my own; I've nurtured the hobby all on my own. It's also screen-free time, which I cherish. I have to actively work to not be on my phone all the time, and my job is computer-based, so I love that when I go to my studio, I can't really look at my phone, because my hands are usually covered in clay or otherwise occupied. This also makes it extremely beneficial on a psychological level. Being at the studio clears my mind, and usually if I feel sad or lonely or generally bad when I get to the studio, I leave feeling better, productive, useful, creative, etc.

Bull started doing ceramics in early 2016 when she realized she "desperately needed a hobby." She was inspired to go to Choplet by her roommate, the artist Hallie Bateman, and learned a lesson very quickly, which she passes on to all her friends who are interested in following in her footsteps:

The hard thing about getting into ceramics—which I always tell people when they express interest—is that you really suck at first. All the shit you make is ugly. Throwing on the wheel is a skill like anything else and takes weeks of trial and error before you feel even mildly competent. So there's a lot of frustration at the beginning, especially if you remember doing ceramics in elementary art class and assume that you'll remember everything.

Okun also mentions the steep learning curve of crafting. She has taught a lot of her friends the fundamentals of knitting, and she notes:

Something I love about crafting and certainly love about teaching people—particularly very high-achieving adults—is I actually think it's really good for people to be bad at something for a while. Like to have to kind of start from square one, to feel that no matter how much study or theory you put into it, no matter how good you are at other things, your first knitting project is probably gonna suck.

It might seem counterintuitive, then, that people who want control in this world would be seeking it from an area in which they must first start out with no control whatsoever, as a neophyte who will only be guaranteed to make lumpy hats or wobbly looking mugs, and yet that's sort of the whole point—when control comes too easily, it doesn't often feel earned, it rarely feels real. Being forced to start from the same helpless place in which you might exist in the rest of your life, but then knowing that if you put in the effort and really invest in what you're doing, control will come, and beauty will be produced, well, at the risk of making this all into one ultra-corny metaphor for, like, our whole entire lives, that's where the joy comes in. There is no life-changing magic to crafting because there is no magic involved. Any type of life change that results from engaging in hands-on work is self-generated, and will probably involve a lot of mess, whether in the form of mud-splattered clothes, grimy fingernails, or newly calloused hands.

But at the end of all that messiness, as I found when, three weeks after my class, I picked up the two pieces I'd made that day, was something I could hold in my hand, and put on my table at home; two small vessels I could use or not use in any way I saw fit. It felt, in just a small way, like I had done something worthwhile, like I'd spent my free time in a way that meant something, even if I'm the only one to whom it means anything. But maybe that's enough. And maybe, just maybe, I'll use one of the containers for a tiny houseplant.