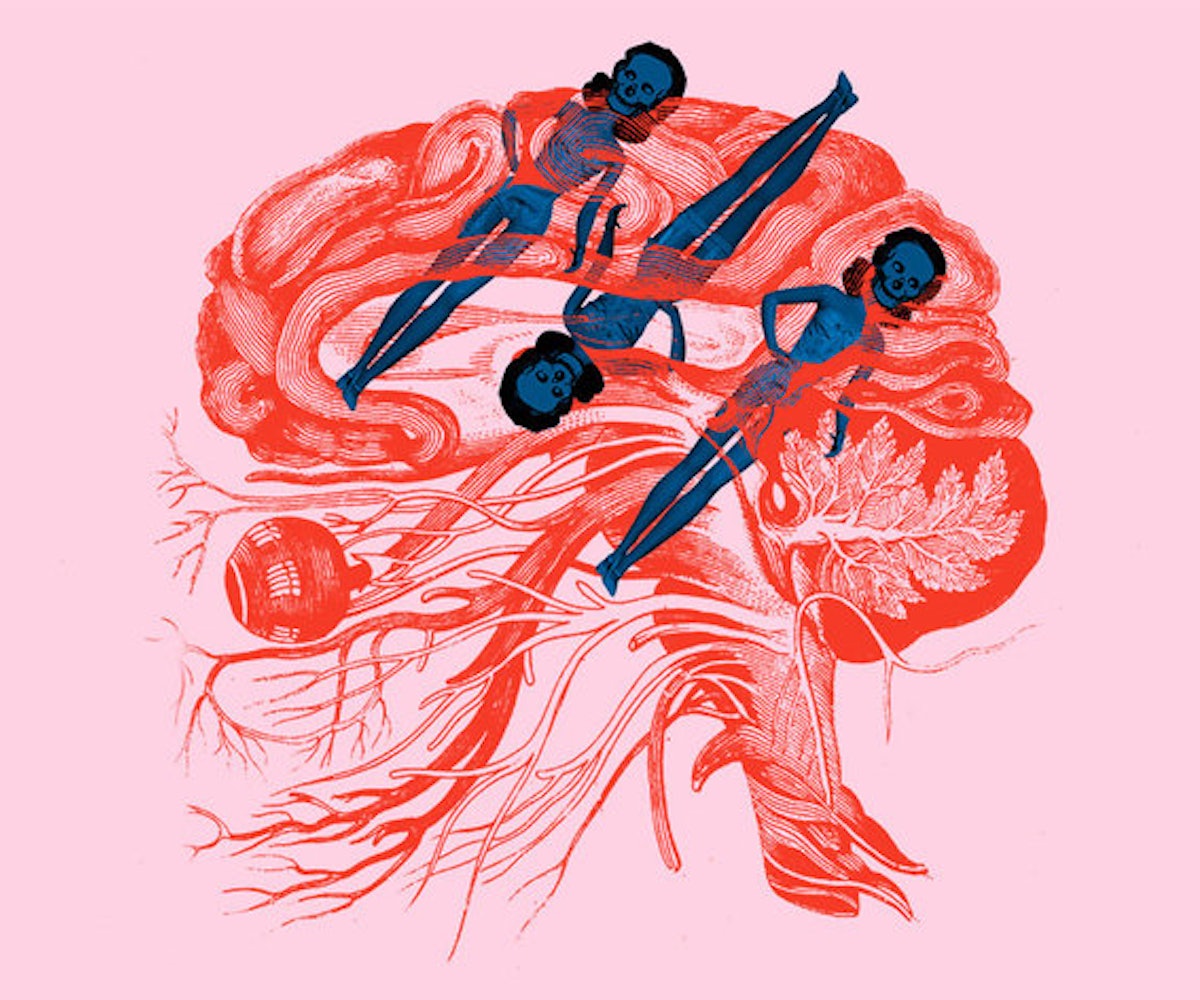 In kindergarten, my classmate Chrissy told me I looked like I was pregnant. There’s a chance if I heard it now, that statement could be understood as a comment on my glowing skin or how good my boobs have looked lately. But at just five years old, it was clear she had one goal—to let me know I was fat. That one sentence was all I needed to begin a lifelong fight with my body over exactly what size it should be.

In the five short years I’d been alive before that comment, society had already taught me that being thin was one of the best things you could be. Not only was it the primary determinant of beauty, but it also was a valuable component of being healthy. With a warped view already forming, it’s easy to see how Chrissy’s comment was the final straw on my road to eating disorders and body dysmorphia.

I’d already absorbed from all the commercials touting low-fat products that dominated ‘90s television that too many calories made you fat. So I began studying nutrition labels on all the food in our fridge and finally told my mom to only pack me a bologna sandwich and water for the rest of the year because those ingredients had been simple enough to calculate the calories for.

That’s how it all started. My life after that point was a series of week-long binges followed by a week of fasting to punish myself. Over the years, my ability to control my restrictive impulses would go up and down, but what never waned was the hatred I felt for my own body—the body that was just never good enough.

My Body Dysmorphic Disorder (BDD) distorted the perception I had of my body so much that I was never even able to identify my frame as thin, even though it was. Instead, I spent hours in the mirror identifying all the flaws that no one else would ever see. At my lowest weight of 88 pounds, my doctor remarked during a physical that it was the first time she’d ever been able to feel a woman’s ovaries through the skin. This was said with no concern for the fact that she’d seen my weight plummet, and I promptly added this story to my trophy case of “you’re too thin” comments I’d received in the past. Even when meant to shame, all these comments did was reinforce that I was on the right path.

I also had plenty of celebrity examples of what I wanted to look like. Famous women of the ‘90s like Kate Moss and Claire Danes were, in my opinion, the epitome of physical perfection. Then, in 1999, Jennifer Lopez happened. Her beautiful curves overshadowed her music in terms of what she was known for, and her body was all anyone talked about. Suddenly, this is what a woman was supposed to look like. This is what we were to be striving for. This was not what I was ready to hear.

In the years that followed, the pushback against the once-dominant ultra-skinny body type grew stronger. What began with a small group of women saying they shouldn’t have to be a size 2 to be considered beautiful slowly became the majority. When women stopped accepting the beauty standards that had been forced on them, I didn’t handle it well. I had fought for 20-plus years to achieve the body I had been told I needed to have, and now it was meaningless. It felt a little bit like working all semester on a school project only to find out that it didn’t even count toward your grade.

I fed all my own insecurities by scoffing at the body positivity movement and laughed along with comedians who made jokes at their expense. I was complicit in the same dangerous game that had controlled my life thus far and done its best to kill me. I even refused to acknowledge what became known as “thin privilege,” because I was never able to think of myself that way. Even though it was this privilege that had allowed me to carry on with these opinions in the first place.

I don’t think I ever consciously wanted anyone to feel ugly or unloved, and I didn’t desire for my piss poor body image to be shared by all women. It’s just that, when I saw these women that didn’t fit the mold I’d been conditioned to believe was ideal, I was at once jealous, angry, regretful, and scared. Jealous that I had never experienced the joy of looking at my body and finding beauty in it; angry that it had taken so long for those standards to break; regretful that I’d spent most of my life miserable and hungry; and scared that I was still too far into the disorder to make a turn now.

Like most of us, this past year has been one of my hardest. The political conversations around women’s rights and sexual assault and the callous way the president equates a woman’s worth with her body have brought out the worst in my body dysmorphia. But it was within this darkness that I came to realize that men like that are why I had been the way I was. They’re the reason I felt like my weight dictated my worth, and they’re the reason I projected that on the women much stronger than me.

I’m still deleting and re-downloading my calorie counting app on a bi-weekly basis, so I don’t presume to tell anyone how to recover from eating disorders. The only change I have been able to make is letting go of my poisonous habit of tearing down other women’s bodies in an attempt to feel better about my own. Everyone deserves to feel beautiful. And despite my best efforts, there are only a handful of days in my life that I’ve felt truly beautiful, and it’s despicable that I would try to take that feeling away from anyone who has found a way to feel it.