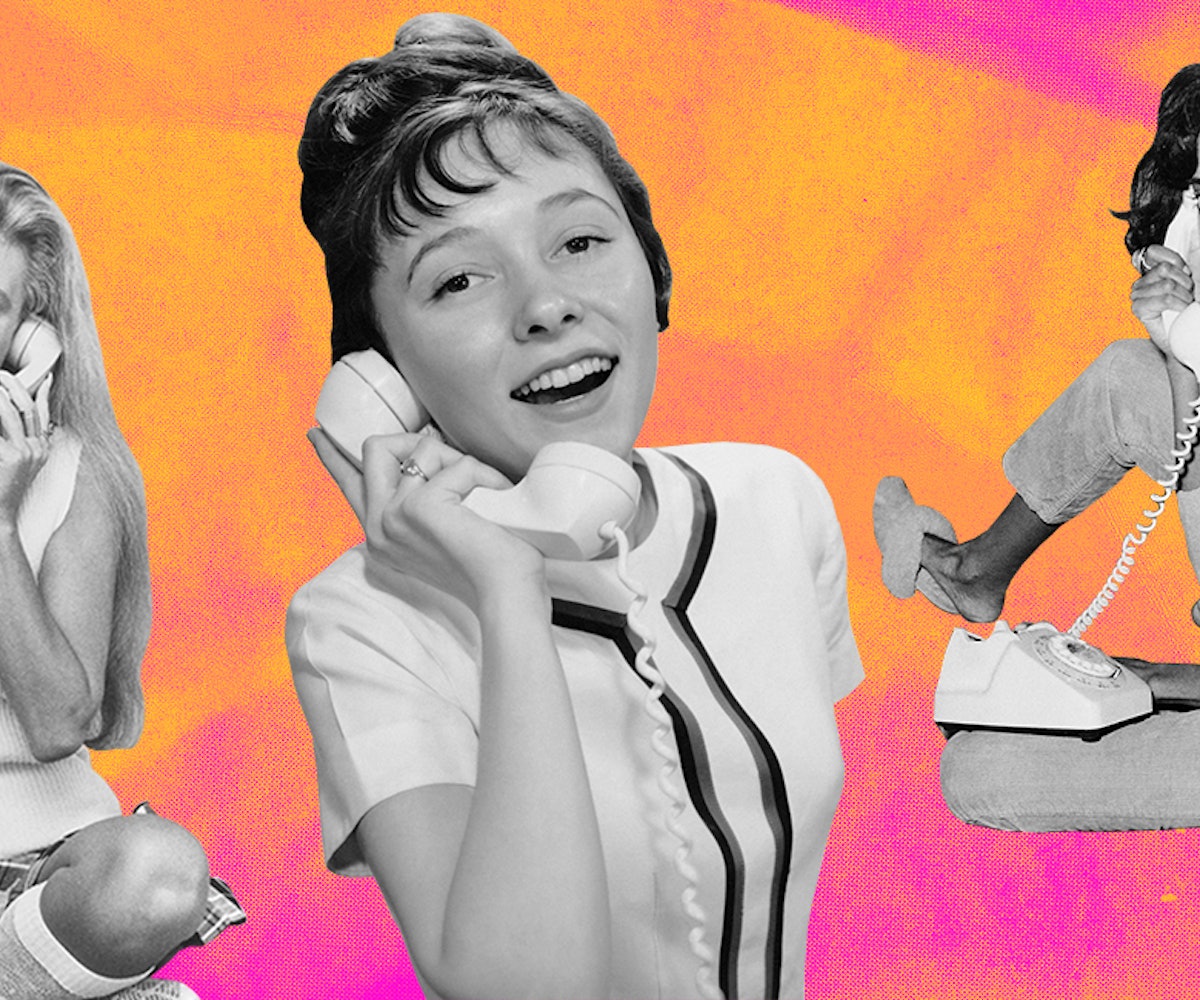 Everyone knows talking on the phone is bad, but what if it turned out it was actually... good?: An investigation.

There is a photo of me as a little kid, no more than four years old, sitting on the floor of the long, narrow kitchen in the apartment where I grew up, leaning against a cabinet, and twirling the curly cord of my telephone between my fingers, as I hold the receiver up to my mouth, which is open, mid-speech. What was I saying? To whom was I talking? It could have been anything or anyone (okay, it was probably my grandmother; I was a child), because back then and through middle school, I loved nothing more than talking on the phone to anyone about anything, and I remember feeling like the phone's cord connected me to everyone else with whom I spoke, like a tightly curled, collective umbilical cord.

The phone was my way of staying connected first with far-flung family members, and then later friends, whose absence from my life extended only from the time school ended to the time it began the next day, but still felt like torture. I talked with my friends for hours or for seconds; sometimes we would call each other just to find out what shirt the other was wearing the next day, so we wouldn't accidentally be twins (sometimes we would call to find out so we could intentionally be twins). But as we got older, and Instant Messages and texting became the primary modes of communication, using the phone for talking reverted, once again, to something I would do only with my far-flung relatives.

It's been well over a decade, now, since texting has become the dominant way to communicate, and it's easy to see why it's achieved dominance when it comes to keeping in touch with one another. Texting is easy: It can be done anytime and anywhere. It's efficient, it prioritizes brevity, and, most importantly, it's convenient. We live in an age of uber-convenience (also, like, literally, we live in an age of Uber convenience), in which we expect our every whim to be available at the push of a button. The only time we want to use our voices to get something is when we're talking to a robot.

And yet, at some point in the last year, texting began to get tedious for me, it often felt like an insufficient (and easily misunderstood) way of communicating, and I started dreading doing it. There is, I think, a simple enough explanation for why texting lost its allure for me: All my friends started moving out of New York. Where once, texting with friends was a sort of stop-gap measure, a way of briefly checking in before we would see each other, face-to-face, and spend hours talking and laughing and being in each other's presence, now it had to do so much more heavy lifting, substituting for the fact that we weren't going to see each other, that all we'd have were the texts, and it just didn't feel like enough. Texting, then, had been fine as a replacement for those three-minute long phone calls of my early teen years, but its power had secretly been dependent on the fact that we would soon see each other again.

So when several of my friends moved to Los Angeles (obviously) and Salt Lake City (less obvious, but still real), texting revealed itself to be what it really is: an inadequate attempt to hack the intimacy that can only be achieved by, at the very least, hearing someone else's voice, refamiliarizing yourself with the pattern of their breathing. And so I have started to do what I haven't done in a really long time: pick up my phone and use it to call someone who isn't a customer service representative.

Talking on the phone with my far-off friends has become a way of making myself accountable; there's an intimacy to it, an immediacy, an imperative to be paying attention in the moment—something that just doesn't exist when texting. And while, when meeting with someone in person, you might allow yourself to be distracted by your phone, that is far less likely, and practically impossible, to do when you're actually on the phone already. You're tied to the person on the other end of the phone in a specific way; there's nothing else in the world besides you and them, and that's more than enough.

In part because all my friends are on the West Coast, so the time differential almost forces this, I like to talk on the phone late at night, lying on my bed, in the dark, which only adds to the feeling of being in a space of our own construction, decorated with designs of our own making. I find myself talking about and listening to everything from the most banal things that happen in our day-to-day to delving into deeply meaningful topics, from relationship problems to mental health issues to newly burgeoning existential crises. We make the space for each other to say whatever it is that is on our mind; we give each other tacit permission to say goodbye when needed, but also to talk for as long as we want. There is an easiness to it, a freedom from the desire to be overly witty or find the perfect emoji combination. We never question the meaning behind a sentence that ends in a period versus one that ends in an abundance of exclamation points, because we can actually hear the meaning in each other's voices.

This doesn't mean I spend every night talking on the phone, or that phone calls aren't supplemented by texts, emails, and Instagram DMs—on the contrary, in fact, we do all that, too. Still though, talking on the phone has become something of a substitute for what we don't get as much of anymore: time together, our bodies occupying the same space. And so while my phone calls with friends take place only about as often as we'd otherwise have seen one another, it's enough to remind us of the bond we have, one which feels as tightly wound as those now extinct telephone cords. It's also a reminder that sometimes convenience, as can be found when texting, is not the goal, sometimes brevity means absence. Sometimes, you realize that it's nice to go back to the way things were, to slow down, to hear someone's voice and let them hear yours. Sometimes, it turns out that we were wrong all along, and that even though everyone knows that talking on the phone is bad, it's actually very, very good.