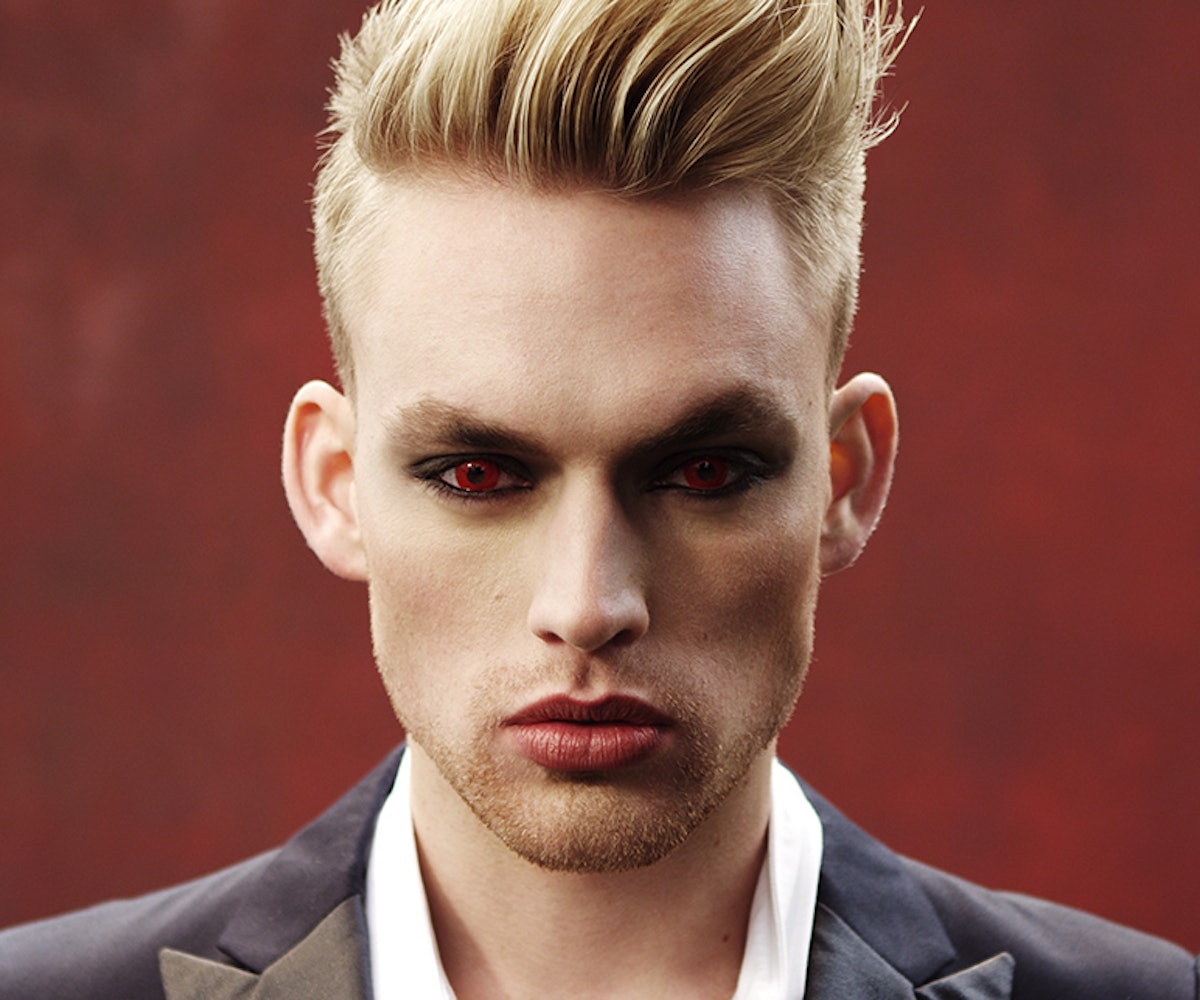 photo by franco lacosta / pottle productions inc 2014 via the cw

Panel last week was a shock for all of us, just shows how tough the competition is in Cycle 21. Now our top twelve contestants have to “bite” their way to the top. See what I did there? (*wink wink*)

Walking into the house with Ben’s photo on the screen was not so bad. Gave us some eye candy to look at for the week. To celebrate Mr. Ben’s achievement, a friendly game of truth or dare started. When I say friendly, I mean touchy feely friendly. Keith and Kari aren’t too shy about their feelings for each other just the same way Denzel and Mirjana aren’t too concerned to let people know about their feelings. So the boys’ girlfriends get dared to kiss, I will admit it was pretty sexy, but what you didn’t see is that Denzel and Keith were also dared to kiss. Did those two hunks take the dare? No way! All I have to say is that when Kari and Mirjana lock lips it’s completely OK and sexy but when the gorgeous hunk of a man Matthew and I kiss it’s like the world has stopped and needs another great flood to wash away the sins. Very interesting!

#1 “Work the Smirk” work those face muscles, Keith and Raelia. You two gave me chills! You know I've got that eyebrow though. No one can beat that.

#2 “Fierce Fantasy Head Roll” Roll it, Shei! With that new hair you, turn into different personalities each time you turn. Love it! Mirjana could be the next Victoria’s Secret Angel with that head roll.

#3 “Peeping Tooch/Booch” The most awkward award goes to Lenox! It’s all about trying and I don’t think she tried her hardest to make it happen. Is she here to win?

Tweet at CW_ANTM with your sexy smirks, head rolls, and tooches/booches! Let’s see what you got.

“Being sexy is so easy” Raelia tells Lenox. I mean, if we all looked like you, Raelia, it would be easy! We stood in front of that mirror practicing for over an hour and she just wasn’t having any of it. Lenox has so much potential that she doesn’t see in herself. She better get it together for this shoot coming our way.

6 AM and what do we wake up to?! Yu Tsai screaming bloody murder, waking me from my dreams about my kiss with Matthew. "Oops did I say that out loud?" This photo shoot is actually a commercial for a men’s fragrance called Spyder Byte to be shot in pairs. All the girls get to be black widow spiders as well as yours truly. Keith and Mirjana?! Denzel and Kari?! Talk about some sexual tension. Then there’s Matthew and me. Everyone better watch their backs because we're about to bite the whole competition.

Whose commercial were you most excited to see?

LINE is killer! If you don’t have the app, download it now and watch all our videos and some exclusive behind-the-scenes videos.

Let’s just rewind and rewind again the clips of me biting Matthew’s lip. Did someone break the air conditioner or is it getting steamy in here? Who knew I could look so sexy and fly? I’m pretty proud of myself. Then again when you're being told to bite the face of the most attractive guy in the competition, you don’t need a lot of help. I’m in love with our photoshoot and how real we made it look. I don’t think there is any one in the world that can look at our commercial and say it wasn’t hot. Booyah!

The two competitors that stood out for me during this shoot were Mirjana and Raelia. Mirjana must have been thinking about last night in the bedroom with Denzel because she was bringing the sexiness. I ain’t complaining. Raelia has it. Everything that Raelia does--all six feet of her gorgeous body--exudes sexy. She can’t help it.

It was painful to watch Romeo and Lenox in this shoot. There is absolutely no chemistry between the two and it showed throughout the entire photoshoot. I truly feel that if that partnership had been with any other pair, they both would have done really well.

Happy Birthday Romeo! We end up celebrating the rest of the evening all together for Romeo’s birthday. Well, one drink led to another and trouble started brewing. Talk about the worst birthday ever. Romeo can’t hold his liquor and makes a huge mistake and head butts Adam, giving him a black eye. With the rules of the competition, any physical violence means automatic disqualification. For someone who has so much potential, it was hard to watch him go, but that means one less competitor we had to worry about (and less drama). Kudos to Adam for standing his ground and not retaliating. Oh and shoutout to Raelia laughing her butt off in the background of the fight!

I thought I was tall before, but give me some four feet stilts and I become a giant! Models on stilts makes for an interesting runway challenge. Being a dancer definitely played in my favor in the stilts. Kari was the first one to get the stilts down, and I was lucky enough to have her as my partner. First, Kari and I killing it on the runway. Tummbbblleeee! Raelia goes down, down, down like Bambi straight out of the womb. She is blessed to be with Denzel who helps her up and gives her support down the runway. Lenox and Matthew, looking great as always. Lenox turns on in front of everyone and Matthew just looks incredibly masculine. Mirjana and Adam were my least favorite pair in this challenge. Mirjana struggled in learning how to walk in stilts but got it together for the runway. Adam was very wobbly and forgot to model as he walked. Shei and Keith gave some flair at the end. Ben got to do his one man performance down the catwalk, giving us a pole dance that I will be rewinding and watching over again. No shame. In the end, Ben’s pole dancing skills (and killer face) get him the winning title for this challenge, but I come in at a close second, making my way up the ranks of the competition. I don’t feel as though Adam deserved a "six" in this challenge but Miss J and Yu Tsai have the final say!

Do you think Ben deserved to win this challenge?

Who was your favorite stilt walker?

Woo, what a crazy week of competition, and now someone has to go home? I can’t handle this craziness. This is the first time we are seeing our commercials for Spyder Byte, and good golly, Miss Molly, we are a sexy bunch. I was living for Mirjana’s commercial. So incredibly sexy and gorgeous. Keith may have helped a little, but Mirjana was the sexy queen this week. Shei impressed me with that two-toned hair--it brought her to a whole new level. Adam just needs to relax! He is sexy for sure, but all those muscles need some relaxing. I can’t handle looking at Denzel’s beard weave! It just makes me giggle. Kari looked fierce with her makeover and not like a dominatrix in this commercial! Kelly, what are you looking at?! Raelia, no words, she carried Ben in this shoot. Tyra even balanced a glass on her booty to prove how awkward Ben was. Now for the guy guy partnership. Giving Tyra chills! This commercial was the hottest TV I've seen in a long, long time. Lenox, the lonesome dove, doesn’t do so hot and for the first time in history of ANTM, Tyra gave Lenox a "one." Uh-oh doesn’t look promising for Lenox!

What do y’all think about everyone’s commercial this week?

Best Photo? I can’t believe it! I’m so proud of myself and even happier that my love Raelia gets the second spot! Hard work pays off everyone. Keith, Mirjana, Matthew, Shei, Denzel, Kari, and Ben join us making it to next week leaving Adam and Lenox in the bottom two. Suspense, silence, prayers for Lenox and her score of "one." No one leaves! I have to say we were all very happy no one went home. With Romeo leaving the competition, none of us had to join him in exile and looks like the top 11 will continue on to next week!

What did you think about this elimination?

Each week gets better and better and this episode was jam packed with some craziness! Only shows you how great this cast is and how interesting the remainder of the cycle will be. Be sure to tune in next week to see how Lenox does with only five frames! Can she do it? I sure do hope so! America’s Next Top Model airs Monday on the CW 9 PM (EST). Follow the cast of Cycle 21 on social media for even more behind the scenes footage!