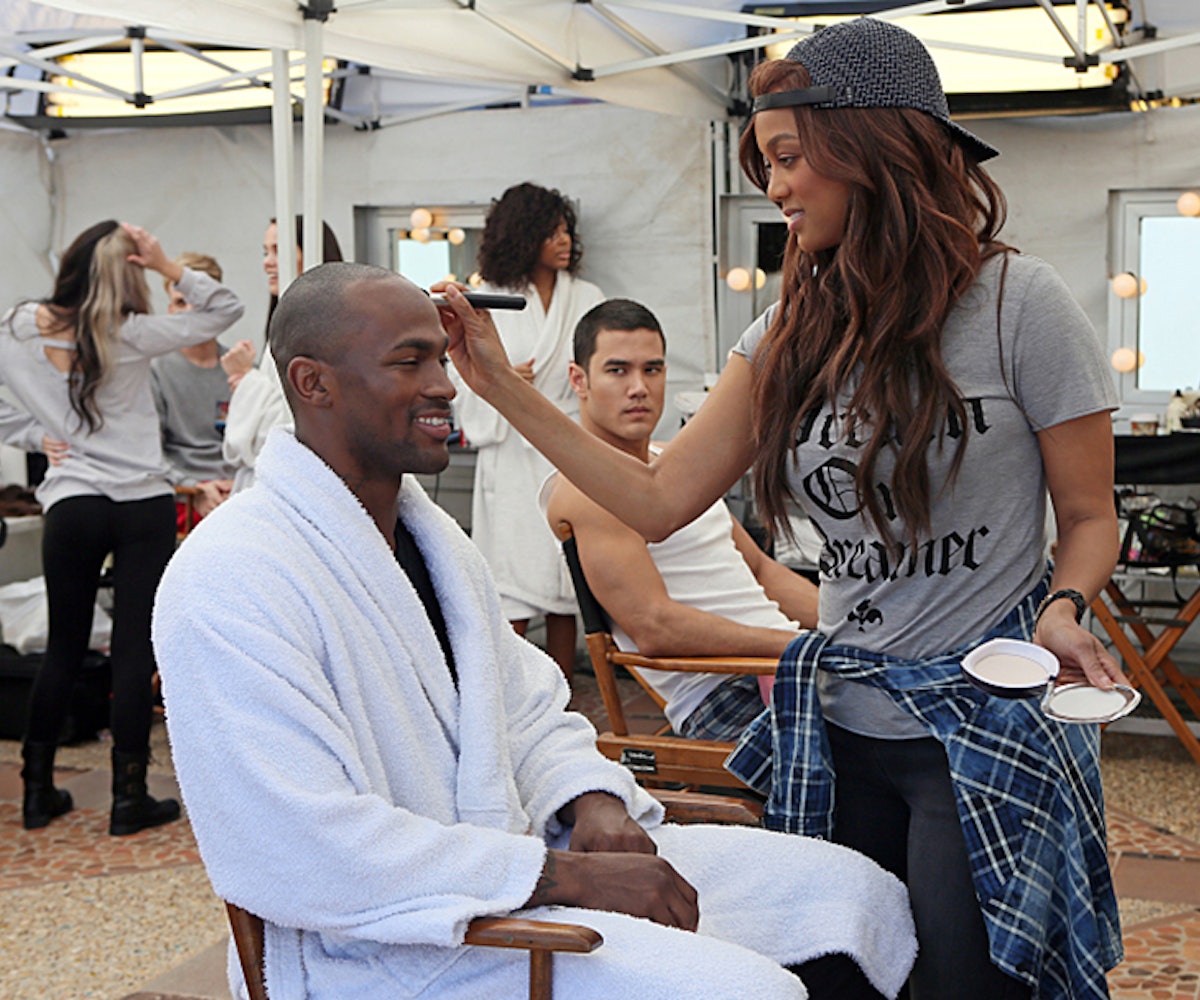 There is nothing like a hug from your mommy! Tyra blessed this 6’6’’ Texas fella with the best Tyra Treat America’s Next Top Model has ever seen! I picked the right week to up my fierceness in the competition and having my Mom and Dad come spend the day with me gave me that extra boost of confidence in myself to keep on fighting to stay in the competition. My parents are two absolutely incredible people, and I am so fortunate to have them in my life. The past two years have been a long journey for my family but we have become stronger because of it. If you have someone who inspires you and gives you courage, you should tell them right now how much they mean to you! Spending time together on Top Model is one memory that the Jardell family will never forget. Thanks, Ty Ty.

Back to the competition.

I will admit I did some crazy, thrill-seeking things in high school, so I legitimately cannot get spooked by haunted houses. It’s a blessing. Or, maybe I’m cursed! For our challenge this week, we have to walk through a slaughter house where Yu Tsai and Cobra Snake are hiding. At a surprise moment, they will begin photographing us, and we must bring that high-energy fierce look that Tyra has taught us. I’m not really sure how this relates to the modeling world, but I do love when people try to scare me! Chantelle is the first victim, and by the sounds of her screams it’s not a walk in the park—it’s a walk in the dark! One by one we make our way out of the slaughter chamber through the “terrifying” maze. I love how Keith wasn’t phased at all by the demonic creatures either. That’s my boy. By far the two most hilarious contestants to walk through the maze were Raelia and Adam. I cannot even begin to tell you how much I died laughing watching Raelia. First, she is praying to God to help calm her down while holding hands with Lenox, and then she is walking through the maze exclaiming, “Excuse me!” Finally she reaches Yu Tsai, but she’s turned the wrong way! I’ll admit. her backside is incredibly gorgeous, but we want to see that fierce face! I was laughing my booch off. Then there was Adam. Oh, Adam, you are a handful and a half! Barking at the demons and laughing in their faces. That party animal was living it up during his walk, but the second the camera starts shooting, he goes straight into these meek, mediocre poses. I was sitting there yelling at my television, “Where is the party animal?!” He totally forgot to be himself and played it safe. I was not expecting that from him. In the end, Chantelle won the challenge for staying fierce and scared at the same time. It’s too bad I wasn’t scared because I had the fierce going for me, I think. Who do you think slaughtered this challenge?

And then there’s Mirjana. “When she opens her mouth she looks like Flavor Flav.” Keith has words equivalent to the great poets of our time. Mirjana has let Denzel get to her, and she lost her fire to fight. Her attitude shifted the second we got back from panel. She lost that hard exterior she’s been showing the whole competition. I’ll admit that I felt for her and how heartbroken she was when Denzel left. But, it’s still a competition. I really think that Denzel leaving will be her downfall.

Adam and his front flip. I laugh every time I think about it because of the fact that he tried to impress us with his flip and landed flat on his face. That is Adam Smith in his natural habitat. It’s exactly how he acts every second of every day. Crazy.

Now, on to our photoshoot.

“Wrap it up and protect your goodies” is the theme for the shoot. AIDS is huge problem in the world we live in today and so many people are affected by the disease. So being able to bring a little more awareness to protecting yourself is something I was excited to do. You must always love yourself and respect your body as well as those you are with. #NoGloveNoLove

For this shoot, we’re wearing extravagant leather and lace gloves covered in feathers with little to no clothes. Yes, I saw a couple of boobs. All in a day’s work. Tyra also showed up on set to do our makeup, which caused me to fangirl over her yet again. I don’t think seeing her will ever get old.

Adam killed this shoot in the first two frames. I think we were all standing there with our mouths wide open because we never thought he had that in him. I am so impressed with his performance. Keith, on the other hand, pranced around like a little fairy prince delivering a weak and sleepy performance that left us all in a confused state. For an NFL football player to not show his strength was so weird to me. That man has some pure muscle, and it would have been awesome to see him bring that strength to his poses. Shei did so well during this shoot. She was able to take the creative direction into her own hands and made the shoot hers. I was very impressed with how she was doing, and the end result was stunning with the white and black feathers. She is the real competition. Mirjana did well in her shoot, too. It’s just interesting to see her so aggressive in the house and then so soft and graceful during every photo shoot. It’s working for her, though, because every image she delivers has been stunning thus far. Lenox’s shoot was not memorable in my eyes. She has been producing some amazing images these past few weeks, so I expected to see the same result, but it looks like some other contestants are stepping up to the challenge. For my shoot, I was nervous because being shirtless is not something I enjoy, partially because I am self-conscious of my body. But I really tried to overcome that and get a good shot. We will see what they have to say at panel!

Who is in it to win it? Apparently not Chantelle! She let us know that she enjoyed the other side of the competition much more than being back. Well, honey, we are all still fighting to be here, and if you aren’t going to fight then you might as well go ahead and pack your bags now. A lot of people fought to be where you are right now, and I guarantee you that they wouldn’t have given up at this point. We will see how long she keeps that attitude when we head on over to Seoul!

Fierce and flawless as always! Tyra greets us and the judging begins. Shei had the best picture in my eyes and deserved a higher score from Kelly Cutrone. nines, eights, sevens, and sixes are thrown around to each model, and Raelia, Mirjana and myself find ourselves at the bottom of the pack. It all comes down to your vote at home! Luckily I’m saved and still in the competition, leaving Raelia and Mirjana in the bottom two. I am crossing my fingers Raelia stays in the competition because I need my boo in the house with me. In the end, Raelia stays and Mirjana must go. And this time there’s no chance for a comeback! Seoul isn’t Mirjana’s next stop, but it is for the rest of us! South Korea here we come!

It’s about to start getting intense, y’all! With seven models remaining and an international destination on its way, you have to bring it. Be sure to tune back in this week for an all new episode of America’s Next Top Model. This time it’s all the behind-the-scenes footage you haven’t seen! We are one crazy group of models. Then, tune in November 7 for the first episode in South Korea! Seoul doesn’t know what’s about to hit it. Follow me on Instagram and Twitter for more Top Model updates and follow ANTM on Twitter and Instagram for more updates. Until next time boochers and toochers.