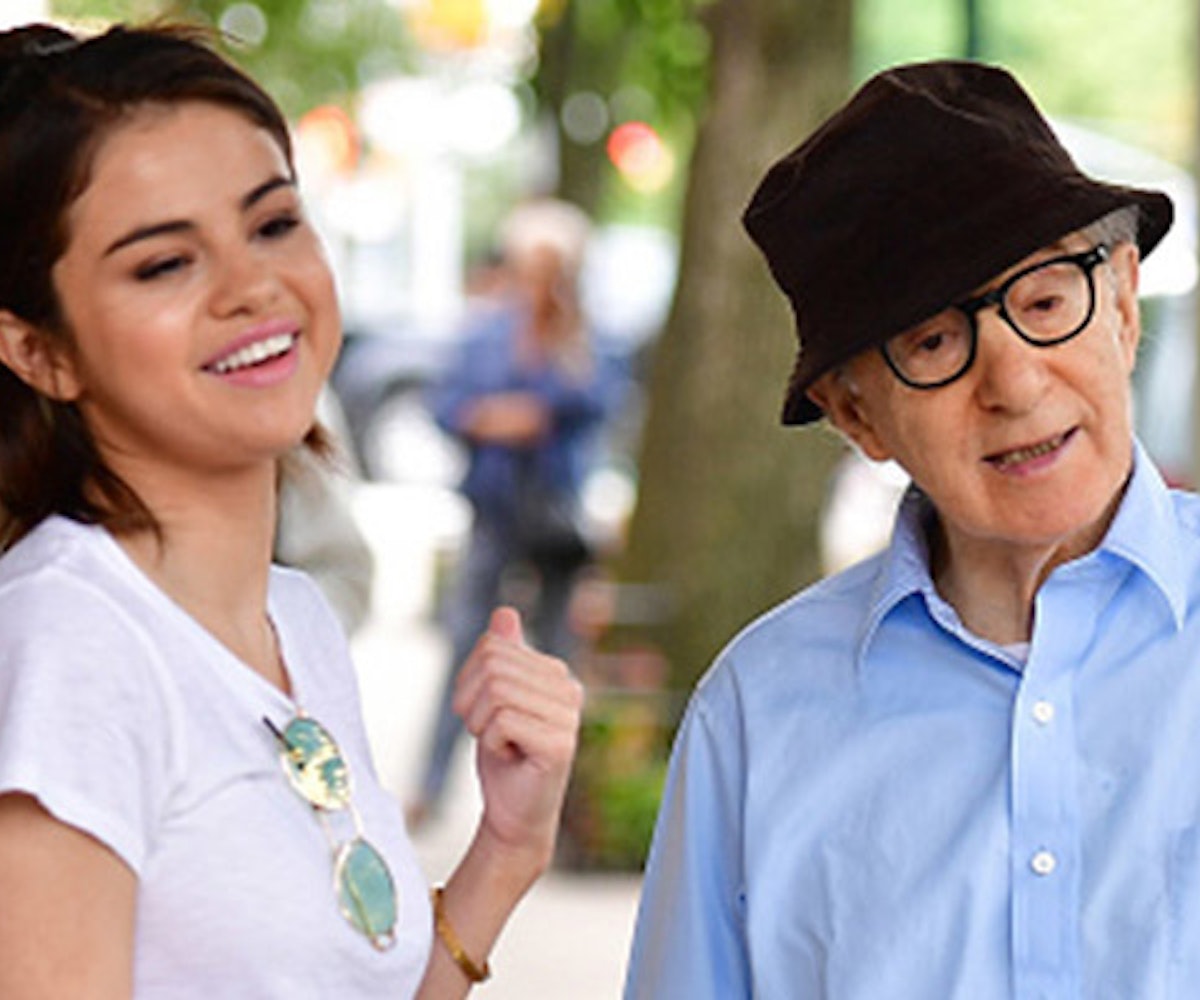 Actors (mostly female) are often asked if they considered Woody Allen's adopted daughter Dylan Farrow's sexual assault allegations against him before working with the director, and they very rarely have a coherent answer. If you're Selena Gomez, you say something vague about the universe working in "interesting ways." If you're Blake Lively, you claim Allen is "empowering to women." And by "women," we can assume she means A-list Hollywood actresses. Kate Winslet's latest response to why she'd work with Allen has to take the cake, though. She claims he actually "is a woman." Okay.

Before diving into these bullshit excuses, it must be noted that reporters should ask more male actors why they work with Allen, not just women. Or, better yet, ask Allen himself about what Farrow says he did. At the end of the day, this should be no one’s burden to carry but his, so let’s start holding him accountable for his actions.

And now: Here are some of the best (and by best, I mean absolute worst) responses actors have to working with the director.

1. Winslet, who stars in Allen's most recent film, Wonder Wheel, said, in an interview with the Sydney Morning Herald, that she thinks "on some level Woody [Allen] is a woman. I just think he’s very in touch with that side of himself. He understands the female characters he creates exceptionally well. His female characters are always so rich and large and honest in terms of how they’re feeling and he just knows how to write dialogue for them to communicate all that.”

2. Blake Lively, who stars in Café Society, told the Los Angeles Times, "It's amazing what Woody has written for women." She added that she put the child molestation accusations out of her mind when considering the role. "It's very dangerous to factor in things you don't know anything about," she said. "I could [only] know my experience. And my experience with Woody is he's empowering to women."

3. Kristen Stewart, who also stars in Café Society, consulted fellow co-star Jesse Eisenberg about whether or not she should work with Allen considering the allegations against him. "I was like, ‘What do you think? We don't know any of these people involved. I can personalize situations, which would be very wrong,'" she said. "At the end of the day, Jesse and I talked about this. If we were persecuted for the amount of s--t that's been said about us that's not true, our lives would be over. The experience of making the movie was so outside of that, it was fruitful for the two of us to go on with it."

4. When asked if she considered Allen's assault allegations before taking a role in his upcoming film—unsurprisingly about an older man who is sleeping with a much younger woman—Gomez told Billboard, "To be honest, I’m not sure how to answer—not because I’m trying to back away from it." Although, it definitely sounds like she's trying to back away from it. "[The Harvey Weinstein allegations] actually happened right after I had started [on the movie]. They popped up in the midst of it. And that’s something, yes, I had to face and discuss. I stepped back and thought, 'Wow, the universe works in interesting ways.'" Sure, that makes sense.

5. Gomez's co-star in the film, Timothée Chalamet, said of Allen's assault allegations, "I understand the question, certainly; it's going to be not only important but imperative to talk about," he said. Then, he deflected by adding, "I'm hesitant to talk about it now, because I'm here for Call Me by Your Name."

6. Cate Blanchett, who starred in Blue Jasmine, said of Allen's allegations, "It’s obviously been a long and painful situation for the family and I hope they find some sort of resolution and peace."

7. Alec Balwin said in a series of angry tweets, "What the f&@% is wrong w u that u think we all need to b commenting on this family's personal struggle? …You are mistaken if you think there is a place for me, or any outsider, in this family's issue."

9. Diane Keaton has remained quiet about Allen's allegations throughout their decades-long professional and personal relationship. "I have nothing to say about that," she said. "Except: I believe my friend."

10. Scarlett Johansson, who starred in Scoop, went so far as to call Farrow's open letter about her alleged assault "irresponsible." "I think it's irresponsible to take a bunch of actors that will have a Google alert on and to suddenly throw their name into a situation that none of us could possibly knowingly comment on," she wrote. "That just feels irresponsible to me." Of Allen, she said, "It would be ridiculous for me to make any kind of assumption one way or the other."

One example of an actor who spoke out—unprompted—is Griffin Newman, who posted a thread on Twitter detailing why he denounces his decision of working with Allen in the past. Another is Ellen Page, who starred in Allen's To Rome with Love, who most recently said that working with the director is the "biggest regret" of her career.

As Farrow wrote in an emotional op-ed for the Los Angeles Times, Allen has been spared in the #MeToo movement. Despite a wave of high-profile sexual assault allegations and dozens of men being fired, ousted, and otherwise held accountable, Allen's reputation goes untouched. Talent should not protect a person from consequences. He only holds onto his power so long as we allow him to, and now, is the time that Hollywood needs to stop making excuses for him. Actually, 20 years ago was the time, but now works, too.