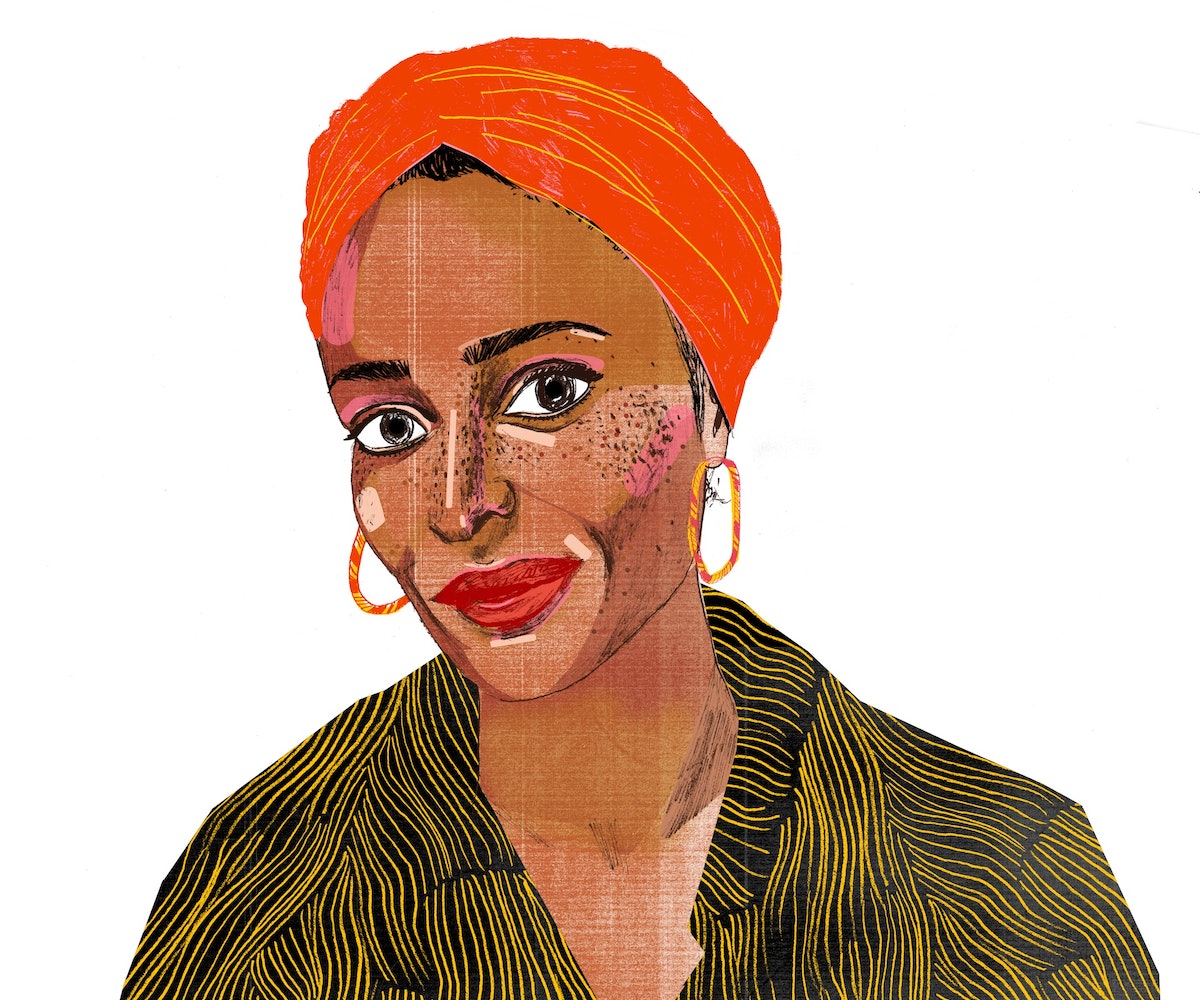 Zadie Smith is one of those rare species of novelists—a genius, certainly, but a genius who has also managed to transcend the literary world and enter pop-cultural consciousness. She is a new kind of lit star, or rather, a kind that hasn’t been seen since the likes of Hemingway or Fitzgerald, but with key differences: She is female, biracial (Jamaican mother, English father), bicontinental (London and New York), and effortlessly beautiful and stylish. She wrote her first book, the best-seller White Teeth, nearly 20 years ago, as an undergraduate.

Her new novel, Swing Time, is a realistic look not only at female friendship but also race, globalization, celebrity, class, and cultural boundaries. In other words, Smith is a writer who reflects our modernity. She’s helping to build a new and crucial literary history, and for that reason alone it is an incredible honor to speak with her. But having just moved to North London, from which she hails, it is all I can do to stop myself from asking where I should eat or shop, not to mention how I can get on with making myself (as a stereotypically exuberant American) at home in this much more reserved culture. But Smith is friendly and patient, as her reputation might suggest, and blissfully generous, offering insight on the differences between British and American friendships (British ones are harder to form but more intimate), and even ruminating on Justin Bieber’s recent move to a manor in North London: “I love Bieber so much—such a beauty. He’s like an Adonis, something from ancient times.”

You graduated from college essentially having written White Teeth, whereas most people in their early 20s are still searching. Do you remember how you came to give yourself permission to be a creative person?

I had no career thoughts at that age. I thought of myself as a student of books. White Teeth came out of that feeling. And I still have that feeling, though I have a real job now. But as for permission, it’s not like I felt at 23, “That’s all done now, I’m finished.” But I do think among young people there is this idea that there are various things in your life that you will do and then feel a sense of completion, or that you’ve scored some point in some eternal race. You know, get married, have a kid—I don’t see life that way. I see it as a circling process toward death [laughs]. It’s nice to do things on the way, but I find it hard to feel that these things are achievements. They’re experiences. As for permission, it must have to do with my family. A lot of people feel like their parents want them to be something in particular, like a doctor or a lawyer, and it’s important to them to have these things to fulfill. Whereas, with us, there was a great, like, benign neglect I would call it.

It sounds like no one ever told you no.

When I said I wanted to go to Cambridge, my parents just said, “Oh, OK.” They didn’t really know what that involved, but it sounded fine. My mum was quite a good cheerleader. I also recognized the absence of a kind of femininity in my house—or femininity as a packaged thing. I just saw it as something that took a lot of time. There was no beauty process, nothing like that.

You weren’t asked to be a certain way?

No. There were no magazines—not because my mother banned them, just because she had no interest in them. That whole world didn’t exist, and the world we saw on TV was pretty much white, so we were outside of it all.

Did you feel out of place?

I did. I mean, it’s impossible not to. I still have a habit that I think all my family does, of counting black people—and that comes from childhood, like, “Oh, there’s one on that TV show….” Now, if I go to an event, I’m still counting. That feeling, it’s just a kind of displacement. It has some negative consequences, but it’s mostly quite an interesting experience. For all these reasons it didn’t occur to me not to do what I was doing [at Cambridge]. I met a lot of kids in college who were very oppressed by history, the history of the novel, or the history of art, or the feeling that they couldn’t add anything. I just thought I had lots of places to go.

You mentioned not having a packaged version of femininity in your household, but one thing I’m struck by in your work, and in Swing Time especially, is that you craft meticulous descriptions of clothes and fashion.

I love clothes. Love them.

I see myself now dressing like my mother, and it’s shocking to me. I went to her flat in a pair of Portuguese sandals—someone had shown them to me on the internet and I bought three pairs. I was obsessed, I have no idea why. I put on a pair and went round to my mum’s and she opened the door in the same shoes. But the way the women in my family dress is very, you know, there are no fripperies.

It is. And they overdress a lot. It would never occur to me to go out of the house in sweatpants. I want to be taken seriously, or even feared. I think women in West Africa dress like that quite a lot. When you’re wearing your wrapper and your head wrap and everything on, you’re a personage of some significance.

Besides your family’s influence, were there fashion icons you attached yourself to?

No, because I was a very large child. I didn’t feel like that world was my world. There were people I admired, like Katharine Hepburn or Zora Neale Hurston, but there was no reflection. Now when I see my students, and when I’m walking through New York, seeing all the black hair, it’s such an explosion of naturalness. I would love to have been growing up now.

Do you think fashion is underrepresented in fiction?

Not in women’s writing. If you read Woolf, she’ll go 10 rounds over a hat, scarf, or dress. And in her diaries she’d recount taking a check directly from wherever she’d just been paid straight to the dress shop. In Britain, there’s a kind of morality about it, like we should not get dressed at all. But the logic behind that is fascinating, because it’s implicitly misogynistic to suggest that a woman who is beautifully dressed doesn’t need her brain—there’s no other purpose to having a brain for women unless you can’t get anything any other way. I completely submitted to that logic when I was a young woman. I really felt that there were beautiful women who were idiotic. Beauty was a compensation for idiocy, and I was a serious person.

That way of thinking played out quite a bit during the lead-up to the American presidential election.

To think that way is to be inside the patriarchy, it’s to think like them—to split women into ‘Well, these are the ones we fuck, and these are the nerds.’ I really felt that when I moved to Italy. You can’t learn it in England because we confuse ethics and aesthetics all the time. It’s part of our way of being. Italians have no conflict between the idea of beauty and intelligence. For them the intelligence is the beautiful, and the beautiful is the intelligence; they don’t see any problems.

Are you superstitious in any way?

Do you believe in luck?

I think life is almost entirely luck. Talent, for example, is luck. It is an argument for social equality, because luck is so irrational. Do you believe somebody who is lucky enough to be born with some gift or another deserves a better life? I don’t. I believe in the integrity of work, but I believe the luck, the incredible luck of being born, for example, as I was, in 1975 in London at a time of basic social cohesion, without war, is a kind of luck that is so overwhelming that you owe something to it for the rest of your life. I could have been born in 1340 in Romania, or anywhere before 1962 as a black woman, and life would have been so incredibly hard. Americans seem so proud to be American, but that’s entirely an accident—the things that arrive with birth are not things to be proud of.

If you could assign every young woman three books, what would they be?

I think if they mean to be a writer, or even a whole woman, Woolf’s A Room of One’s Own. Boring recommendation, but kind of vital. I have my old favorites, but there’s so much new stuff. I just read Alexandra Kleeman’s You Too Can Have a Body Like Mine, and right now I would say that it’s really important to any young woman to read that book. I’m reading Yaa Gyasi’s Homegoing right now, and it seems vital to me. I had to email her at only 80 pages in to say, “If I had this book when I was 15, I would have had a different life.” There are all these fucking sob stories about the end of this and that, but the fact is: Check out what these young women are writing. It’s a very good time for books.