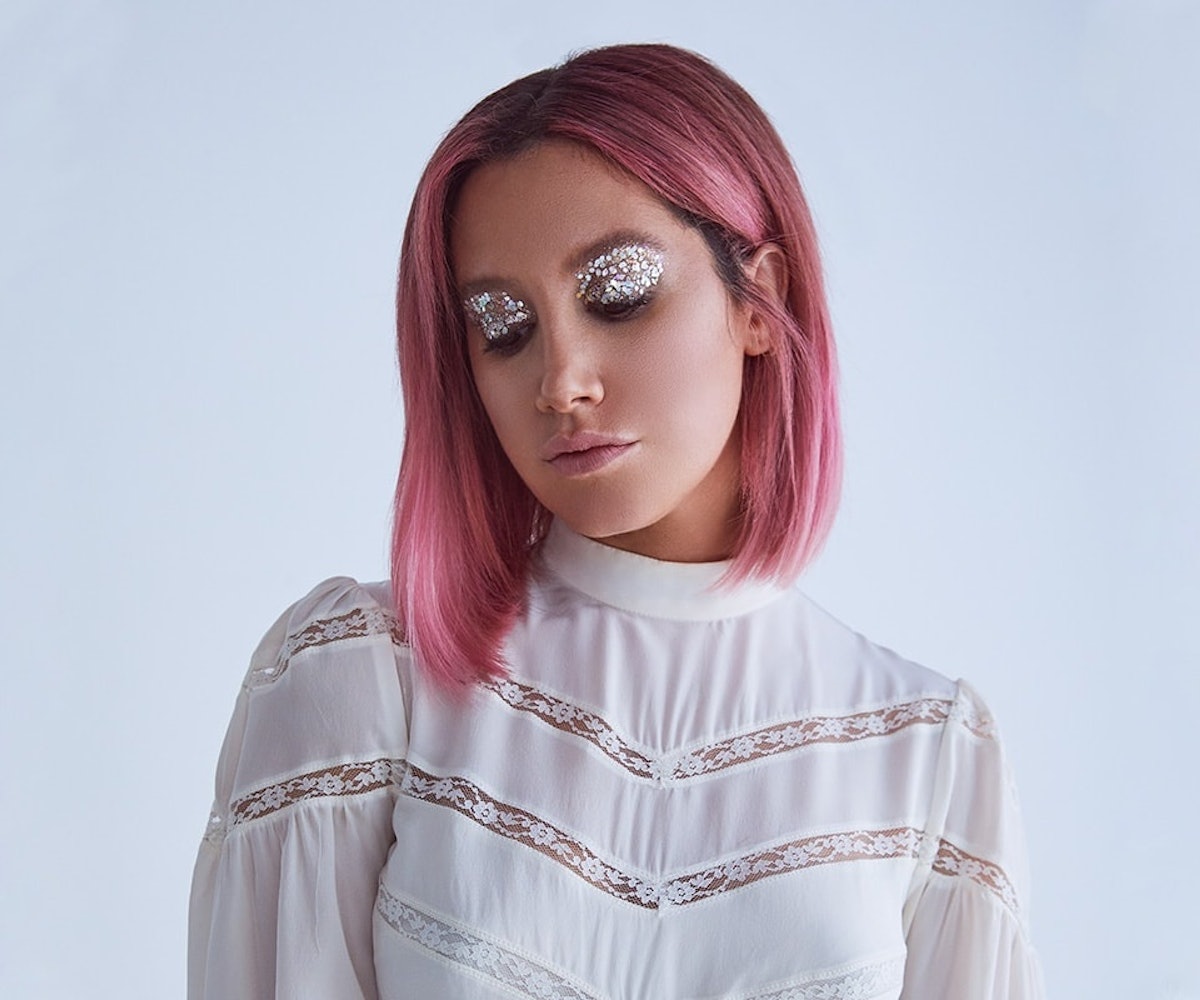 Until last Friday, when Ashley Tisdale released Symptoms, it had been 10 years since her last studio album, Guilty Pleasures; and 12 years since her debut, Headstrong. Both those albums are time capsules for the particular era of pop music that bore them; everything from the tingly synths of "He Said She Said" to the guitar-forward anthem "It's Alright, It's OK" is exemplary of the pop soundscape of the '00s.

Symptoms shares a through line with Tisdale's earlier work, particularly the quieter moments of Tisdale's catalog, like the closing track of her debut,"Suddenly." The song was one of her first co-writes, and the most intimate offering she'd released to fans at that point. Atop piano and a string orchestra, Tisdale admits to the feelings she has as the world opens up to her, but declares she will be fearless in the face of it all and open up to the world: "Suddenly I am in front of the lights/ Everything I'm feeling/ Scary and beautiful at the same time/ And every day I try just to breathe/ I want to show the whole world the truth inside of me."

Having so much come at you so, well, "suddenly" is a difficult proposition at any age, but particularly when you're just 21, as Tisdale was when she rocketed to fame. However, as Tisdale explained to me over the phone recently, "No matter what I do, in acting or in music, life experience is always going to help [my] art. I needed to have life experience, from even just Guilty Pleasure, to really find who I was, to get through things I hadn't been dealing with. Now I'm able to communicate that stuff in my music."

Whereas in the past, Tisdale was more opaque about what that "stuff" was, she's now revealing that she's using her music to offer glimpses into how she deals with mental health issues—the less glittery side to being in the public eye.

"Back then I would struggle with anxiety with performing, [I'd] have little panic attacks before I would go out on stage. But I didn't even know that's what that was," Tisdale told me. "Now I know." From getting to know herself and her body, and how to treat it right, came "a lot of self-love," the right ingredients to find inspiration to make music again.

"Back then I would struggle with anxiety with performing, [I'd] have little panic attacks before I would go out on stage. But I didn't even know that's what that was."

Symptoms is Tisdale's personal diary as much as it is her highlights reel. With this new album, she uses the symptoms of mental illness—her anxiety and depression—as a contextual framework. It's not her lamenting, or even testifying for the duration, but turning her experience into something that resonates as optimistic pop for the modern listener. You can go to it with no knowledge of Tisdale, no backstory or care for one, and experience it just the same. "This is the best representation of who I am," Tisdale told me. "This album is a piece of me."

For Tisdale, the journey to putting out her third project was a long one. Tisdale wanted something she genuinely cared about, and needed things to click into place, to follow through with an entire record. "I was going through a self-help book at the same time," Tisdale said, as she met songwriter Rachel West. It all came pouring out once she realized what she wanted to say as an artist.

"I feel like for the first time I'm really able to be myself in front of everybody. And I'm not hiding little things that I thought were negative about me. I'm actually embracing those things, and I'm actually proud of the things that I've been through," Tisdale said. "I mean, the best part is that not only did I go through something, but I went through something, I got through it, and I have an album to celebrate that."

Tisdale did things differently this time around, opting to release independently rather than with a major label, taking the reins and steering the creative process. "I think when I was younger, I didn't really know who I was as an artist and what I was singing, or where I fit into that world," Tisdale added; 10 years later, she's come into her own. "I co-wrote every single song of the album, and I really am confident. I'm speaking my truth. I feel very secure in my place, and in who I am." Tisdale considers Symptoms "a success," regardless of what happens on the charts or radio: "It doesn't matter what it does in the world, as long as it makes people dance and they have fun, and it helps them in their journey. To me, that is already a success."

Tisdale also didn't want to let her mission, to explore the symptoms of her mental illness, weigh the project down. "I feel like the best part of this record is that it's not talking about the subject and dwelling in it," Tisdale explained to me, "Each song is a symptom of what I experience, but we flipped it and made the songs also about something else." It's not, she makes clear, that she's ignoring the underlying problems, more that she's committed to joyfulness in spite of them. She told me, "It's more about having fun and acknowledging that we have these symptoms—people with anxiety and depression—but also not taking it... kind of laughing about these situations sometimes." Tisdale added, "Sometimes we get so serious—anxiety can make us feel a certain way, and I wanted to free myself of it."

"For me, the whole point [of this album] was, I want to make someone at home not feel so alone," Tisdale said. "I lost somebody to depression two years prior. So I really just felt like we need to start speaking about these things." She doesn't want to give the language of mental illness, the literal words "depression" and "anxiety," "so much weight" in our lives; she wants them to carry less stigma, less isolation, less daunting perceptions. "You know what, let's not give it so much heaviness," Tisdale told me. "Let's just be like, yeah, this is something that people that deal with"—as normal as any other physical health condition, without shame or speculation. And perhaps, with the right amount of poptimism and the willingness of others to help bear this weight, things just might start to feel a whole lot lighter.