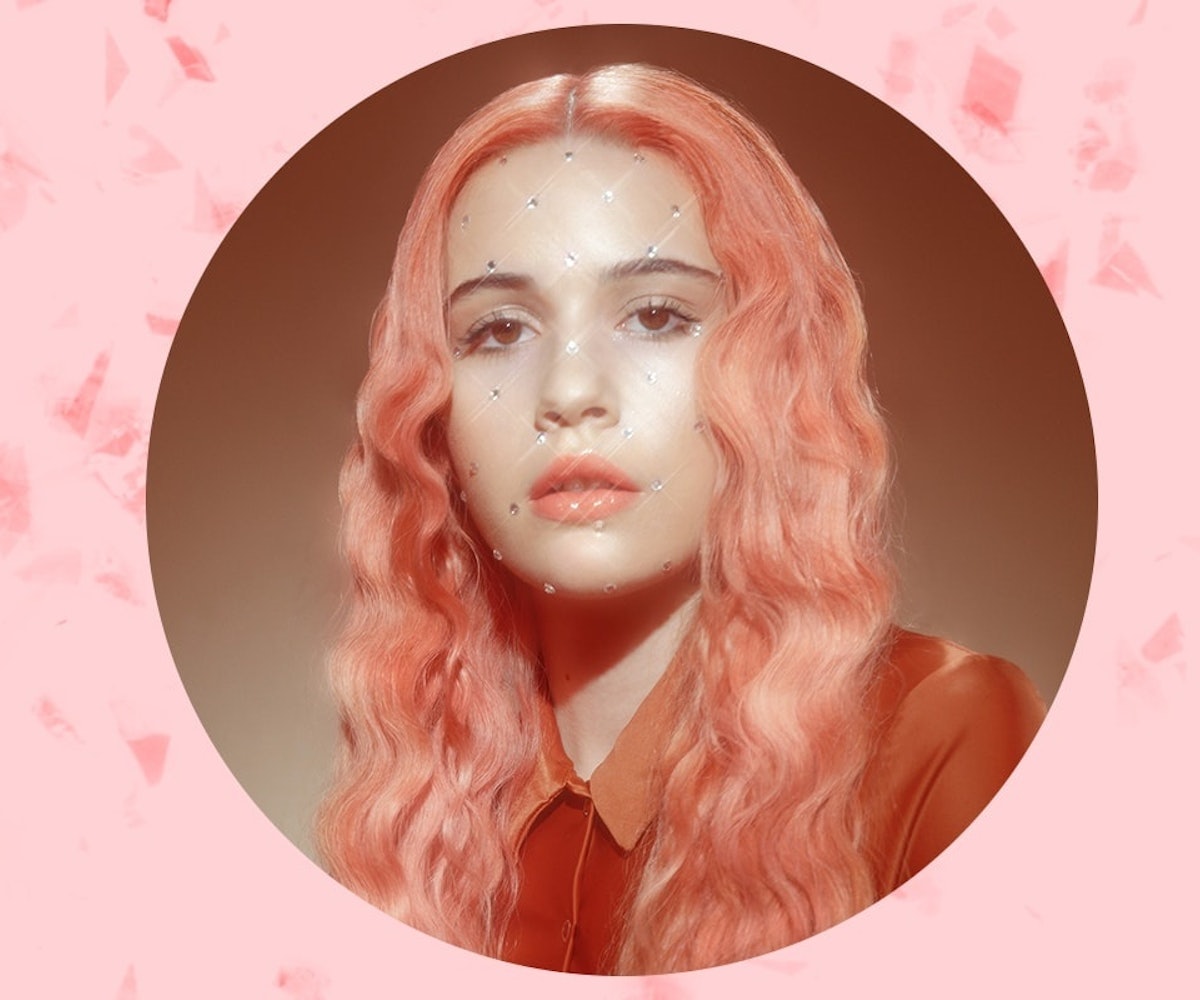 According to NASA, a black hole forms as the result of a dying star. Compressed gravity tightens a disallowance for any type of light to escape, rifting enough energy to cause a supernova as the once-sun explodes. It's actually scary, but morbidly beautiful, though, I know what you're thinking: What does any of this have to do with Bea Miller?

Just like the birth of any cosmic eruption—even a metaphorical one—Bea Miller's career in the music industry originated thanks to the interplay of smaller elements; tiny, but major victories that clashed and diverged until igniting the flames of a bound-to-be pop star. These triumphs would emerge at the beginning of 2012 when Miller entered Season 2 of The X Factor at the age of 13. With her torched strands of pink hair, the singer had proven—and at a younger age than most famous powerhouses—she was designated for something out of this world. (Enter: her soulful and intimate twist on Sia's "Titanium.") A vocal alien, her far-too-advanced skills ultimately led the contestant to a ninth-place finish in a shockingly early exit on the show. It's comical, sort of, this narrative arc: another fan-favorite of another televised singing show once again didn't win. But for Miller, this wasn't just a narrative like that of a weakening star, this was her life—and it was frustrating that she wasn't being allowed to shine.

"I wasn't allowed to pick my own songs," Miller said. "And I wasn't really allowed to pick my wardrobe. I had a lot of walls built up around me at that time, and I didn't really feel like I had any freedom." However, she declares falling out of the competition did not break her. It aided, and maybe somewhat over-prepared her, for her future as an artist who could create the music—and send the message—she most wanted to launch into the universe.

Teleport forward now to 2015, when Miller introduced her first album Not An Apology. Its tracks spoke with every ounce of the passion Miller breathed, combining into 11 songs reaching over 100 million-total streams on Spotify. It's a work of art that helped me come out, though, of course, Miller couldn't know that; but, it was a revelation for me, newly-turned-20. It was with this album that I felt for the first time like an artist was really listening to me, and then answering me. It's a rare magic I think few are given and few manifest in the way Miller does. With instantly iconic smashes like "Fire N Gold" and "Young Blood," Miller's sound was electrified into every fan's ears, but despite its glory, Miller acknowledges that the album still reminds her of the time in her life when she was navigating being a teenager and the figuring it all out.

"I think you do a lot of your growing as a human being between the ages of 13 and 18," Miller told me, defining her transition between leaving The X Factor and working on the first album. "But, I think at that point, I knew that I wanted to be myself and to tell everyone, you know, screw off,essentially. But I don't think I realized exactly who 'myself' was in its entirety." She was young, trying to discover who she was meant to be in the world and in the sphere of music, struggling to figure out who she wanted to surround herself with, what she wanted to say, and where she wanted to end up.

Miller further admits she didn't write a lot of the songs from Not An Apology but also chose to sing only what she resonated with, reflecting elements of her personality that are crystal clear after talking with her for just a short while: She is genuine, honest, and unapologetic about being both.

That first album, she says, contained "the best extent of my truth that I could give at the time." But there was more to come as Miller soon swept into some of the darkest spaces she had yet creatively explored, which resulted in her 2018 sophomore album, aurora. It's a body of work co-carried by "S.L.U.T.," the clapback to an Instagram comment that slut-shamed her, and is multiplied by the raw tone found in songs like "i can't breathe" and "like that." The album embellished Miller's opportunity to truly own that process of walking into the studio. Writing and singing her own words, it was complete control for Miller, for the first time.

"It was about who I wanted to write songs with, what producers I liked, what songs I liked, and what melodies sounded best with my voice," Miller said, talking about her writing experience on aurora. "I was coming up with the lyrics and really just speaking my mind. I started to figure out more about myself as a person, and more about my abilities in the studio."

Miller's experience with Instagram-shaming made her more firm than ever in her belief that women should support each other, because "when women tear women down, and men see that, it makes them think that it's okay for them to do the same thing." That sentiment is clear on songs like "yes girl" or "brand new eyes," hopeful anthems demanding freedom; both empower, like Miller's songs tend to do. But there are some songs that work as confessions, signs that Miller is human, not an extraterrestrial, and that it's okay to be vulnerable. This is the music she wishes she'd had more of when she was growing up.

"There were some days where I was like, you know what, I don't relate to everything that I'm hearing on the radio right now," Miller said. "Because I'm having a bad time, I'm having a rough day, I'm experiencing something that is making me feel alienated in this emotion because everything I'm hearing is about the opposite. I think for a long time that frustrated me, and especially, I really looked for a young female that I could look up [to] that would be like, Hey, I'm having a great day sometimes, and other times, I'm having a terrible day. Hey, you don't need a man, you don't need this or that, you can be your own independent woman or whatever. Whatever it was I was feeling, I wanted more representation from young women. There definitely were some people who were doing that, but I felt like [there] wasn't enough."

For Miller, her art is all about emotion and keeping true to who she is as a woman, singer, songwriter, friend, and person for her fans to look up to. "The maximum number of emotions that I can cover is what I want to do," Miller told me. "I never just want to talk about the good things that happen to me, or just about the bad things. I want to talk about all the experiences I'm having on a daily basis." She's spun the "Bea Miller experience" even more recently, with her turn on NOTD's "I Wanna Know" in March 2018. The single's 160 million-plus streams still amaze Miller, even as the song has become a staple for everyone she knows—and millions of those she doesn't.

You've probably read this far expecting a boom, the type of thundering that comes when a black hole blares after its initial glimmer. In a way, you're correct. Like an ultraviolet ray, Miller's rise into 2019 can't be eclipsed. Releasing "it's not u it's me," a flashing laser of pinks, purples, and mints projected through the single's more recent music video, Miller's revolution is blasting into being. She captures it all in her lyrics: "And I wanna lay under the stars/ And hear the ocean while I'm talking bullshit"; and: "Your distractions were exactly what I needed/ Now I see the truth." It's like a melodic spaceship you can't escape. And why would you? Even her new, pink hair is the futuristic aesthetic I didn't know I wanted, the rebirth all of us are craving.

"[It] was a really thought out decision," Miller said, outlining her reason for rose-colored locks. "The overall theme for my project and everything upcoming is kind of themed around sunsets and outer space. Those two things can't happen at the same time—a sunset comes before a starry night sky—but those are two of my favorite things in the world to observe. I kind of wanted everything to be based around an alternate universe, where all the things I love can exist at the same time. And, obviously, the main color in a sunset is pink... I was like, fine, I'll just be a walking sunset."

As Bea prepares for her first headlining tour, her move toward a place of positivity, self-pride, and inspiration has her gearing up for its launch today, April 23. This national trek was once a dream she'd always wake up from, failing to believe that any of it could ever actually happen. But, within about three days of its announcement, most of the tour dates had sold out. Miller's tour—titled, appropriately, "nice to meet u"—is a milestone, then, a sign that she has really transformed since she first hit the stage seven years ago. The timing seems fitting in that the first-ever image of a black hole circulated the internet earlier this month. But it all transcends mere coincidence and just makes clear that Bea Miller is a force of nature, one that, this time, is not going anywhere.