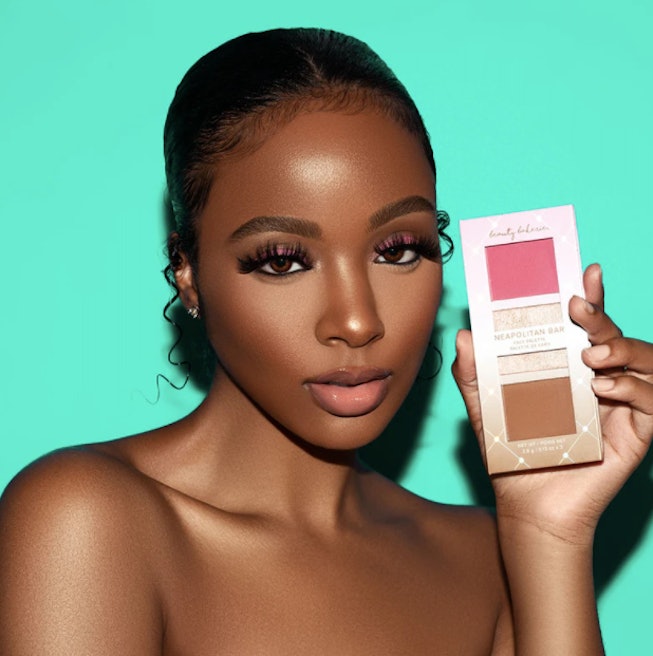 Some beauty brands are doing their part to spread a message of support amidst continued protests against acts of police brutality. Days after George Floyd, a Black Minneapolis resident was killed in act of police brutality, and protests around the world continue. Some companies have answered the call for support from protestors, giving donations and raising awareness for the cause. Along with a $1 million donation from Glossier to Black Lives Matter and Black-owned beauty businesses, here's how other beauty brands are using their platform to call for an end to police brutality.

As noted by Instagram users including Lauren B. Brown, beauty brands, including Sigma Beauty, Urban Decay Cosmetics, and Anastasia Beverly Hills have all stepped forward, pledging monetary support to organizations working to end racial injustice. The decision made by companies to support those fighting for an end to police brutality and racial injustices comes as social media users and fellow beauty influencers have called for those with large platforms to speak up.

For more information on how you can get involved and help, check out Black Visions Collective, Reclaim The Block, Black Lives Matter, alongside many others. Additionally, you can educate yourself on engaging in anti-racist work with these books, here.

ABH is pledging $1 million towards combating "systemic racism, oppression, and injustice," starting with a $100,000 donation spread across Black Lives Matter, The Innocence Project, The NAACP Legal Defense and Education Fund, Black Visions Collective, and The Marshall Project. The brand also shared via Instagram that it would allocate a portion of its $1 million pledge towards Black-owned businesses and artists in the beauty industry. More information will be available once details are finalized internally, according to ABH.

BeautyBlender announced that 100 percent of its profits from purchases made online on May 31 would be given to the Equal Justice Initiative.

On Sunday, May 31, Beauty Bakerie, a Black-owned cosmetics company, shared a screenshot of its donations. Its founder, Cashmere Nicole, has also used her social media account and the brand's to share ways that followers can get involved.

Writing that it was committed to making progress and education, BH Cosmetics said it was starting its support with a donation to Color of Change. "We’re challenging ourselves to have the right conversations to listen, learn and share," the brand wrote on Instagram.

Billie donated $100 thousand to the NAACP and Black Lives Matter, writing that it was a "small step toward hopefully making our country the safe place it should have always been."

"It is no longer enough to be “not racist”— anti-racism is the only option," Chillhouse wrote on its Instagram. The brand also announced it was donating funds to the Minnesota Freedom Fund.

ColourPop, along with its sister brands Fourth Ray Beauty and body by SOL, wrote that it had "heard" its customers and intended to donate to the Minnesota Freedom Fund and the ACLU. After donating $25 thousand to each organization, the company created an additional Instagram post, writing that after watching the weekend's events unfold, they had decided to donate $250 thousand in support of Black communities through other organizations.

e.l.f. Cosmetics pledged $25,000 to Color of Change, writing, "We do the right thing with the highest ethical standards and a clear commitment to diversity and inclusion."

Responding to social media followers, Essie acknowledged concern raised on social media. "We hear you, and agree that our language of solidarity to the Black community was not strong enough." The nail polish company then shared that it made a donation to NAACP.

Fluide announced its support of Minnesota Freedom Fund, writing, "We are saddened and heartbroken by the events that have taken place this past month. You would think America would have progressed but here we are in 2020 seeing the same photos and having the same conversations that were had 60 years ago. If one person is oppressed no one is free. Silence should not be an option!"

Glossier pledged to donate $1 million dollars to the Black community, with $500k going to organizations focused on combating racial justice — from Black Lives Matter to The Marsha P. Johnson Institute — with the additional $500k allocated to support Black-owned beauty brands in the form of grants. More on Glossier's donation here.

Glow Recipe donated $10 thousand to Black Visions Collective and pledged to use its Instagram to encourage followers to support Black-owned businesses.

Along with making a donation to the national Black Lives Matter organization, GoodDyeYoung announced it was donating to the Nashville chapter.

For the first week of June, Hero Cosmetics announced that 100 percent of its proceeds from a new launch, up to $10,000 would be donated to the NAACP Legal Defense and Education Fund charity.

For two days (June 1 and June 2), Insert Name Here Hair will give 100 percent of its proceeds to Black Lives Matter. "We stand in support of justice and racial equality," the company wrote on Instagram.

The jewelry and nail polish brand has pledged to donate all proceeds of its latest polish color, Dune, to various human rights non-profits forever. According to a statement shared on Instagram, the brand's first set of donations will be divided between the Minnesota Freedom Fund, Los Angeles Community Action Network, and the NAACP.

Sharing the words "Black Lives Matter" against a black background, Manic Panic announced it was donating 15 percent of its sales to the NAACP Legal Defense Fund.

Milk Makeup partner and beauty influencer Snitchery has pledged to donate 100 percent of her affiliate sales earnings to Black Visions Collective. Milk Makeup has committed to matching her donations. Additionally, the company later pledged $50 thousand to the NAACP and said it would match any donations made by team members to the charity of their choice.

Writing on Instagram that "silence is not an option," Morphe Brushes announced it was making a donation to Black Lives Matter, and then encouraged followers to also support organizations making positive change.

For the entire month of June, Nails INC. will be donating the entirety of its profits from online sales, done through Nails INC.com to Black Lives Matter. "We are incredibly proud to work with hugely inspirational talent from the black community. We see you, and we stand with you," the brand wrote.

Olive & June acknowledged that it wished to do more than "offer words" and shared that it donated $10 thousand to Color of Change.

On behalf of Saie, its founder, Laney Crowell, made donations to multiple organizations including the Minnesota Freedom Fund, the Black Visions Collective Movement and Legal Fund, Reclaim the Block, and more. Saie shared highlights of its donations, along with ways for followers to get involved, on its Instagram Story.

Sol de Janeiro has made a donation of $30k across Campaign Zero, Black Visions Collective, and Reclaim the Block.

Writing that it supports Black Lives Matter, Starface pledged to donate 100 percent of proceeds from its upcoming new product launch.

The brand made donations to NAACP, Black Lives Matter, ACLU and Campaign Zero. Along with monetary support, the company is taking time off from "working on the next PR box or the newest shade of lip jelly" to "educate ourselves and understand what we can do."

Along with continuing diversity and inclusion trainings for all store associates, Ulta pledged a donation to the Equal Justice Initiative.

Sharing a post which read, "Silence is not an option," Urban Decay announced it was also donating to the Minnesota Freedom Fund and Black Lives Matter.