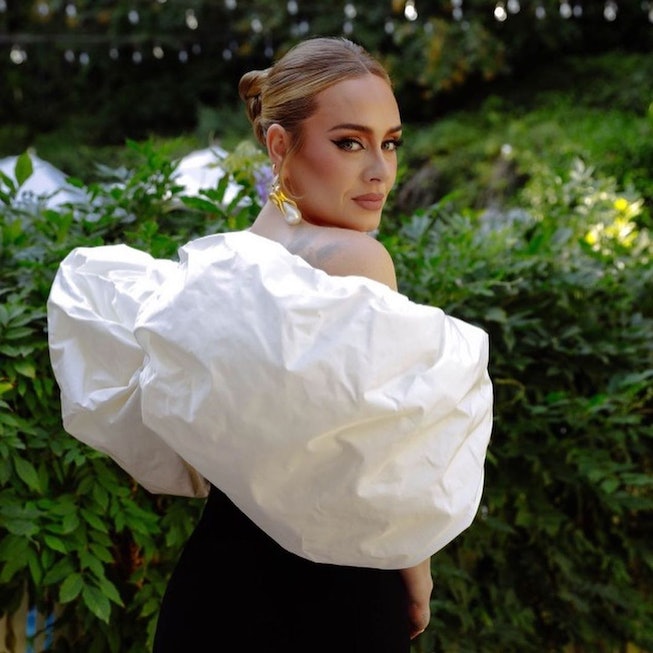 Hello, from the other side. Adele is officially back, dropping the preview for her upcoming single Easy On Me yesterday on Instagram and YouTube. In addition to being excited for the new track and Adele’s return to the music scene after six years, everyone can’t stop talking about her iconic cat eyeliner.

The Easy On Me preview itself is vague, showing Adele’s immaculately lined eyes glance in a car's rearview mirror to the soundtrack of dramatic piano playing, and then showing the singer drive a truck full of belongings on an open road with pages of music streaming out behind her. For a short clip, it’s about as emotional as you’d expect from someone who’s made her career out of love and heartbreak songs. It’s also left many inspired to try out her signature cat-eye look.

According to experts at Justmylook, searches for how to recreate Adele’s iconic makeup skyrocketed by 9900% in just an hour after the trailer dropped. The look consists of perfect winged eyeliner, a subtle cut crease shadow, and bold eyelashes.

This isn’t the first time that Adele makeup has gone viral. In 2016, beauty YouTuber Lisa Eldridge shared the secrets from Adele’s makeup artist, Michael Ashton, in a YouTube video that now has nearly three million views. Her Notting Hill Carnival hair also went viral in all the wrong ways last year, getting turned into a meme.

There are also countless Adele eye makeup tutorials on TikTok, but if you want to opt for the products her makeup artist swears by, the YouTube video shared them all. Check them out below to recreate Adele’s look while we all wait for her post-divorce music. Easy On Me will be released on October 15.

This palette is for a subtle eye, a smoky eye, and everything in between.

This liquid liner combines long-lasting wear with a precision line.

This best-selling mascara builds volume for a false lash effect.