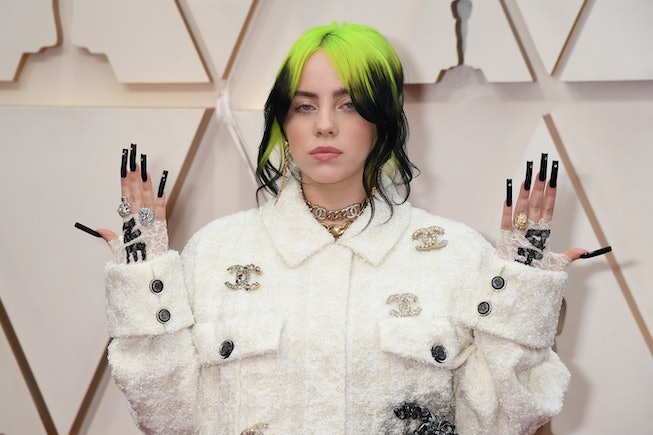 Billie Eilish made a major change this year, but unlike her frequent manicure reveals, this change will likely remain a secret. Joining Vanity Fair for her annual Same Interview segment, Eilish shared that she accomplished one of her 2019 goals — getting a new tattoo.

For the past four years, Eilish has participated in an interview series with Vanity Fair. The segment features the same set of questions each year, and the video is one that fans particularly look forward to. Although much for the singer has changed in the past year, including the five Grammy wins she secured, her biggest change might be getting a brand new tattoo.

In her 2019 interview, Eilish had said that her future goals included getting a new tattoo, and in this year's interview, she confirmed it happened. However, there's a catch. “I did get a tattoo, but you won’t ever see it," she says.

While the singer chose not to share what artwork she adorned her body with, she did have another major surprise for fans. She currently has 16 new songs written, and according to Eilish, she's truly gotten into a groove when it comes to creating. "I feel so much more confident in my writing," she says. "I feel like I know myself better...I love it [songwriting] so much more, I actually really do it enjoy now and I do feel I'm pretty good at it now, to be honest with you."

It remains to be seen when Eilish might release some of those new tunes, but she did promise to never take live music for granted. Looking back on this year, and the restrictions put in place by COVID-19, Eilish said that when live music does return, she's going to make every show her best.

Eilish also used the interview to speak about the personal growth she experienced this year. "I learned so much more about the way people are living that I wasn’t aware of before. The climate crisis and social injustice and all the bad things made me think differently,” she said. “I will never stop fighting for all the Black and Brown people who have lost their lives to police brutality.”