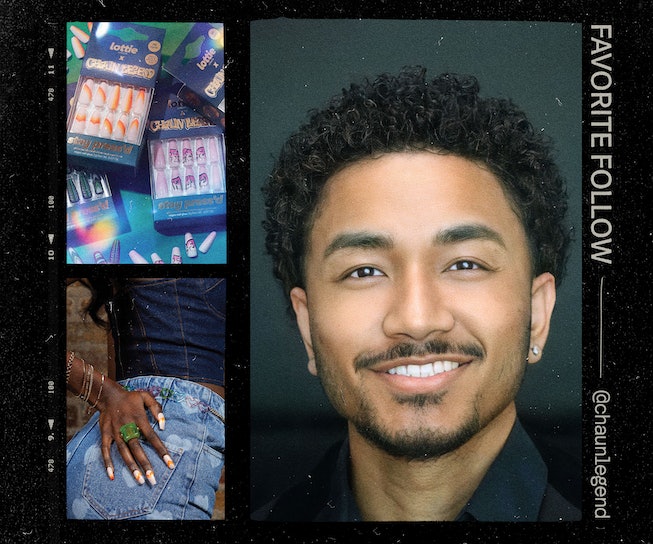 We can all agree, nail art is having a major moment— and there’s no sign of the trend going away. Whether it’s due to Instagram or two years of inconsistent salon availability making us crave longer, more exciting nail designs when we can get them (probably a combination of them both), nails are getting more of our attention than ever before. Celebrity manicurist, Chaun Legend agrees, noting the trend on the red carpet: “Before, it was just about the outfit, the makeup, the hair, and not so much about the nails— it always used to be short, plain nails.” But times have notably changed: He says, “Now the poses I'm seeing on the red carpet, they’re always showing off their nails or putting their hands on their face. I love it.”

His clients definitely have something to show off. Chaun’s signature style includes colorful and whimsical designs on extra, extra long acrylics. If you’ve seen Khloé Kardashian’s or Kylie Jenner’s nails lately, he’s likely been responsible for the designs you’ve added to your manicure inspiration file. From Kylie’s Yin Yang birthday manicure, to Khloé’s sparkly New Year’s nails (and many sets in-between and since) it’s clear their collaboration is key to setting the trends we all follow season to season. Not content to see his designs exclusively on the Hollywood elite, Chaun just launched a line of press-on nails with Lottie London, now available at Walmart. It’s never been easier to achieve Chaun’s cool, LA-inspired nail designs at home, and in mere minutes.

Below, Chaun tells NYLON how he got his start, talks about his favorite nail art designs, and the inspiration behind his new collaboration with Lottie London.

“Many, many years ago, in 2006, I was living in Philly and a good friend of mine convinced me to move to Kentucky because his sister had opened a huge shop out there and she didn't have any workers. They pretty much bribed me to come, saying, ‘we'll pay for the licensing, we'll pay for your flight here” and I didn't really had anything going on. So, I was just like, ‘Why not?’

I didn't know anything about nails at all. I have an art background—I used to do murals on walls, I love doing portraits, abstract painting, any kind of art medium that involves painting. So I thought, it's probably just painting but just on a smaller canvas. But, it wasn't until I started experimenting with nail art and incorporating art onto nails that It started to come together. At that time gels didn't exist and we didn't have all the tools that we have today, but I still made it work.”

On Faking It ‘til You Make It

“It wasn't until I moved to LA in 2014 when I picked up acrylics, because every salon that I went to was looking for acrylic nail techs. I just practiced on my roommates, and that’s pretty much how I learned. I was surrounded by salons that catered to celebrities, and one salon I was working at, put me on the spot and was like, "We have a client for you, she wants a full acrylic set”, and I was sweating. I was still fresh with acrylics, but I kind of finessed it. Now, I can do it almost with my eyes closed. It's just, my hands doing the work and I don't have to think about it anymore.”

“Usually my clients already have something in mind or have an event that they're going to and know what they're wearing. They'll ask to do nails that tie in with the outfit, or they'll show me a new bag that they purchased and be like, "I want my nails to match this bag exactly”. It's this collaborative effort. I love whenever my clients are on a red carpet and they do the poses and getting all these nail shots. I love it. I love me some long nails. Anytime someone comes to me asking for XXL length or even just a little bit longer, I love it. The longer the nails, the bigger the canvas.”

On Navigating Life With Extra-Long Nails

“Definitely invest in a pair of tweezers. Put one in your car. Put one in your purse. Tweezers will help you when you're at the parking meters or at the gas station or if you drop something.”

“I wanted then to represent me and my love of Los Angeles. The graffiti design, that was a definite must for me. Having an art background, I'm automatically drawn to anything drawn or painted on walls. I love street art— it's beautiful and so artistic. When I do the design on clients, I like that you almost can't tell what it says until you really look closely, but it still has all of the beautiful colors and the ombre. How everything comes together, it just looks beautiful.

I had been doing so many French tips on nails. I thought, ‘Okay, I need to switch it up’. I had been doing it so much there has to be something I could do to revamp it. So I started adding lines and colors. Now my most popular, most requested design ever is the French swirls. I call it ‘French Twist’. I just feel like it’s something that everybody loves and can wear.”

His Favorite Part Of The Glam Process

“I like the most, the end result. It’s the reactions. When clients are looking at their nails and they're so excited. That makes me feel like my job is done. I just love seeing the responses and making them feel good.”