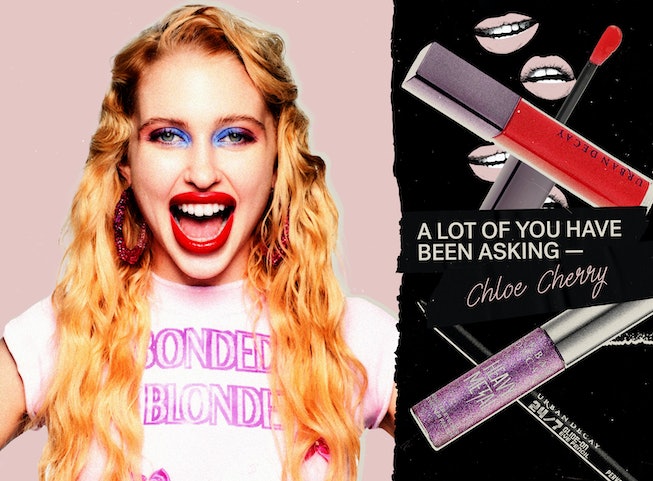 When Euphoria came back for its second season in January 2022 after a year and a half off the air, everyone was excited to see the return of their favorite characters after such a long time away. However, in just the first episode, a new fan favorite emerged as Chloe Cherry’s character Faye hit the scene. As Faye and Zendaya’s character Rue have to deal with an awkward moment being left alone together after just meeting (and sitting in a car outside of a drug deal, no less), Rue asks an innocuously polite, small talk-making question: “How’s your New Year’s?” Spacey Faye responds in all aggravated earnestness, “It’s f*cking New Years? I swear, my boyfriend doesn’t tell me anything.” A star was born.

Cherry might feel like she came out of left field to some, but now it’s clear she’s here to stay. Most recently, she’s joined forces with Urban Decay as the face of their latest product, Vice Lip Bond Liquid Lip Color (available starting July 13 on the Sephora app, and on urbandecay.com and sephora.com starting the next day). Whether it’s a fiery red shade or a subtle neutral, no one has better lips with which to wear it.

Below, Cherry talks to NYLON about her new partnership with Urban Decay, her most embarrassing makeup phases, and why she thinks her Euphoria character doesn’t wear makeup.

What was your first beauty memory?

The first makeup product I ever loved was was blue eyeshadow. I was in third grade and was with my best friend and I think her sister, or mom, or somebody had a baby blue eye shadow that was kind of sparkly. We liked it because we felt like princesses or fairies or something like that. I don't know if I would wear that color on a day-to-day basis now, but back then I thought it was the greatest thing ever.

How did your taste in beauty products change as you grew up?

When I was in middle school, for a minute I was into punk, emo kind of vibes. I was obsessed with super-heavy black eyeliner under the eyes. I thought that was the coolest thing back in 2009, or whenever. My family thought it looked terrible, but a lot of people wore lots of black eyeliner! It was my favorite look.

Your family was just like, “She can look however she wants to look, even if we don’t like it”?

No, no, they were not. And they weren't wrong. It was kind of crazy to say that to a 12 year old. But yeah, it looked terrible. Then, funnily enough, I became obsessed with the Urban Decay Heavy Metal Glitter Liner. This was in seventh grade, when I lightened up a bit and became girly again. I would just put glitter on the top of my eyes and I thought it was the cutest thing. And finally my family was like, okay, that's actually cool.

And now, where are you with makeup?

Now my makeup is actually very simple. I’m really more into skin care than I am makeup. Skin care is my absolute favorite thing. I do it every single day and I love finding new products, getting facials, trying new things, and just making my skin look as good as possible. Most days I would wear no makeup and just have my skin look nice. If I do want to wear makeup, or if I'm going to be on camera, I put a little bit of concealer under my eyes, put concealer on any blemishes, and then a little bit of blush and bronzer to warm my face up a little bit, and then some mascara. I like to use a lot of mascara to make my eyelashes really long. And then do my eyebrows. I only do those four or five things, usually.

What are you doing for your skin these days?

To start off, I do have this acne treatment stuff for my skin and it’s really good because I used to have really bad cystic acne until I started to treat it with the help of a dermatologist. I have my retinol, which is good for acne and also for wrinkles. Then I put hyaluronic acid on my face. I love it because it makes my face feel so moisturized. I like to do some under eye cream, either something that's moisturizing or something that's brightening. Then, I like to seal all of that in with Vaseline.

I guess my goal is to feel as good as I possibly can with as little makeup as possible. Basically my vibe now is just wanting to look good with no makeup at all.

You’re also on Euphoria, which is so known for makeup, but your character still gets to be pretty natural.

It's because she's on so many drugs. She just can't do it every day. It's just too much and she loses all the products. It's just a lot. [Laughs]

What’s the best tip you’ve ever gotten from a makeup artist on set?

I really love this one trick. I don’t always wear lipstick, but when I do, I always wet a towel with warm water and rub it on my lips to exfoliate them and it works so well. It exfoliates much better than a lip scrub — they don't work for me. But the wash cloth and rubbing it on my lips exfoliates nicely and brings out the color. It just makes them look really good.

When you do wear lipstick, what color do you usually gravitate towards?

If I want to a bold makeup look, I'll do red, like the new [Urban Decay Lip Bond Liquid Lip Color] in “Unbreakable.” Usually I go for a pinkish, natural lip color like “Text ’Em.” It’s exactly the color that I would normally reach for. This lipstick doesn't transfer and normally that's one of the hardest things about wearing red lipstick — is that it gets all over the place, so this is really nice. And it stays glossy, too. I've never seen a product stay this glossy.

What's your favorite part about working with Urban Decay?

I just really love that my life has come to this place. I used to be obsessed with their glitter eyeliners and their pencil liners, too. Oh, there was something about it, it was really black and also a little smudgy — the Glide-On Eye Pencil one. They were a favorite. Basically Urban Decay was the only makeup brand I cared about when I was young.

Do you have a beauty philosophy?

I think my main philosophy is that it’s all about skin, it’s the most important step because, you know, having a good base is what really makes all the difference.

But honestly, my routine takes, like, four minutes at night. I just don't like to be spending a lot of time on this stuff. I prefer to do other things. I don't care to think so much about my looks — that stresses me out so much. Sometimes when I'm on TikTok, I see these people with their long skin care routines and some of them will be wearing those weird face tapes to bed or putting their face in a bowl of ice every day. I don't know if we actually need all that. I'll always like take care of my skin, but I'll never go that crazy. I prefer to just keep it simple.