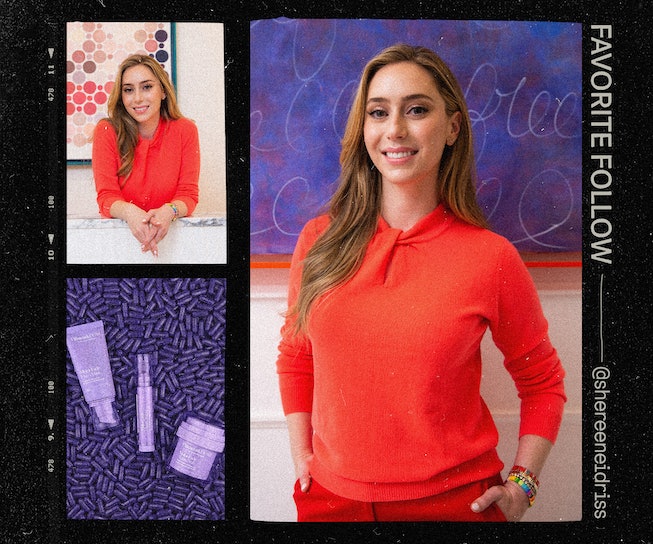 by Sam Neibart
Dec. 15, 2022
Favorite Follow
We may receive a portion of sales if you purchase a product through a link in this article.

Longtime skin care lovers and novices alike know that lockdowns in 2020 created a huge boom of wannabe at-home experts. With extra time on their hands, people became their own personal derms, estheticians, and cosmetic chemists, trying to internet educate themselves into getting their best skin ever. Nearly three years later, that trend shows no sign of stopping. But cutting through the chatter of online information, is dermatologist Shereene Idriss. Since 2018 she has been educating the masses on Instagram stories — often from the comfort of her bed and pjs —s haring straightforward facts and answers to her followers’ dermatological questions. “When I first started, there was hardly anyone in the space and I remember there were doctors and colleagues asking, ‘Are you sure you want to do this from bed? You’re just giving out information?’” she says. But her no-BS attitude and casual delivery ultimately created followings across Instagram, YouTube, and now, TikTok.

For those many followers who can’t visit her New York City dermatology practice, she has extended her reach by creating her own product line, PillowtalkDerm by Dr, Shereene Idriss, named of course after #pillowtalkderm series across social media. The line, consisting of three products formulated to address hyper pigmentation has already sold out twice, with the Major Fade system is officially available for preorder now on pillowtalkderm.com. The philosophy behind her skin care line is the same as everything else: results. She says, “Evening out your skin tone is what's going to give you your biggest bang for your buck.”

On creating a social media presence:

“It was not premeditated at all; it was a fluke in 2018. I was at a point where I was hearing all of the same misinformation getting repeated constantly and I just got sick of it. That’s when I went to Instagram stories — basically to vent about the stuff that's not real online. I thought it would last three stories at most, but then it snowballed and became its own little miniseries on Instagram and then YouTube, and now TikTok.

I don't view myself as an influencer at all. It's it's more of an educator role, because I'm coming from a point of view. When I first started, there was hardly anyone in the space and I remember there were doctors and colleagues asking, ‘Are you sure you want to do this from bed? You’re just giving out information?’ It was met with some pushback, but that has completely shifted since 2020. Now there are so many doctors giving out advice, talking online, and really trying to help one another.”

“I think I make my best videos when I'm all riled up. Then, I just don't care and I go for it. Those are the ones that resonate the most because I’m saying something that others are feeling, but they're just not saying it. I think thats why Instagram stories were such a hit for me. I shoot from the hip. I was just going with whatever I was feeling. When I talk about skin care, it's a visceral thing because I live it and breathe it and eat it every day. I feel like with the internet, people are really opinionated, but a lot of the time people aren't really saying anything. So being able to have an opinion that's backed up is almost unique in a way.”

On making your own personalized skin care routine:

“It's very easy to have fear of missing out on skin care and to want to jump in on the next trend. I think you have to turn the noise off. You look at yourself in the mirror from afar, not magnifying mirror, and you focus. What are my first concerns? Is it acne? Is it pigmentation? Is it my skin barrier? Am I dry? Am I oily? Focus in on your biggest concern and start with that. Then you can go systemically issue by issue by issue. It's about creating growing routine that is constantly targeting your needs at the time. Our skin is a living and breathing organ and it’s going to change.”

On starting her skin care line:

“Patients would come into the office — and they still do — and complain about a little line here or there. But if I have them take a step back and I ask ‘Do you see your line at that angle?’ They often don’t. What they’ll realize is the first thing you see is discoloration. I realized through my patients that evening out your skin tone is what's going to give you your biggest bang for your buck.

I very intentionally did not put step one, step two and step three [on the Major Fade products] because I didn't want people to feel like they had to buy all three for it to work. Each one has a lot of merit on its own. But together it's a real powerhouse because you're targeting pigmentation in three different ways.”

“I think the biggest misconception [about skin care] is that a miracle needs to happen overnight. You know, everyone is expecting instant results and the truth of the matter is it takes time and consistency and effort, no matter what you're doing. That’s whether it's skin care working or going to the gym or working on your personality or whatever. Consistency over intensity is something I have been preaching for five years, far beyond social media. The best way to get the most out of your money with skin care is consistency. You do have to give something at least a good two months before you really start to see results.

The other thing is, people want to follow what the latest trend, and what's the newest, but your skin doesn’t care about trends. You have to look at your skin and focus on what it needs. Don’t chase trends that don't necessarily apply to you.”