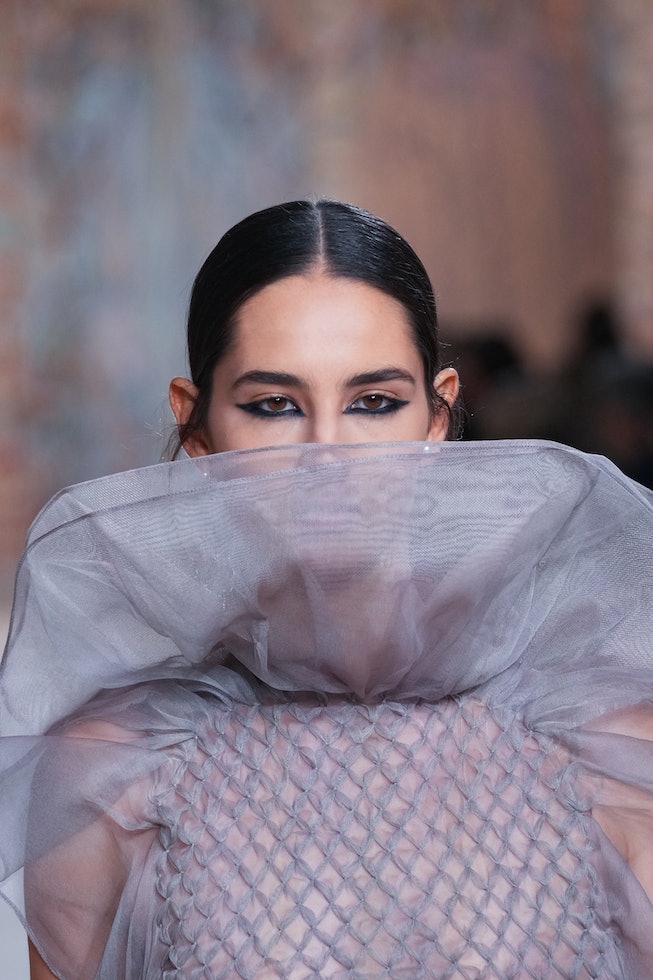 After a year of digital shows, Dior’s Fall/Winter 2021-22 Haute Couture collection made a real-world splash on Monday, July 5, by confirming the return of punk rock eyeliner.

Kicking off Paris Fashion Week, the show featured a bold smudgy eye look consisting of a deep blue under-liner using Dior’s Couleurs Couture Eyeshadow Palette, along with matte skin and moisturized lips via the Rouge Dior Lip Balm. The look gave every model’s gaze a strong and mysterious appearance. From afar, the liner appears to be classic black, but on a second glance the color has depth and dimension from the evening blue hues. The look was created by Peter Philips, creative and image director of Christian Dior Makeup.

The fashion collection aimed to reclaim “the values of haute couture” after pandemic restrictions but, the ladylike bent of tweed coats and pleated gowns shown alongside black mesh garments, signal that punk is far from being dead in couture. The Dior show follows Chanel’s punk-inspired Resort 2022 show earlier this year in May, that featured lip piercing jewelry and heavy black winged eyeliner.

With Gen Z icon, Willow Smith dropping her latest pop-punk track Transparent Soul earlier this year with a music video that also sports heavy eyeliner, it’s only a matter of time before we’re in the middle of a full-on punk eyeliner renaissance. Think Avril Lavigne circa 2002. (She’s even on TikTok now sporting her signature look.)

Love it or hate it, Dior’s Haute Couture offers a variety of ways to turn a bold punk makeup look into an everyday statement. Whether you want to try under-eye liner, navy blue, or even a super smudged look, get ready to embrace the return of makeup’s most rebellious era.