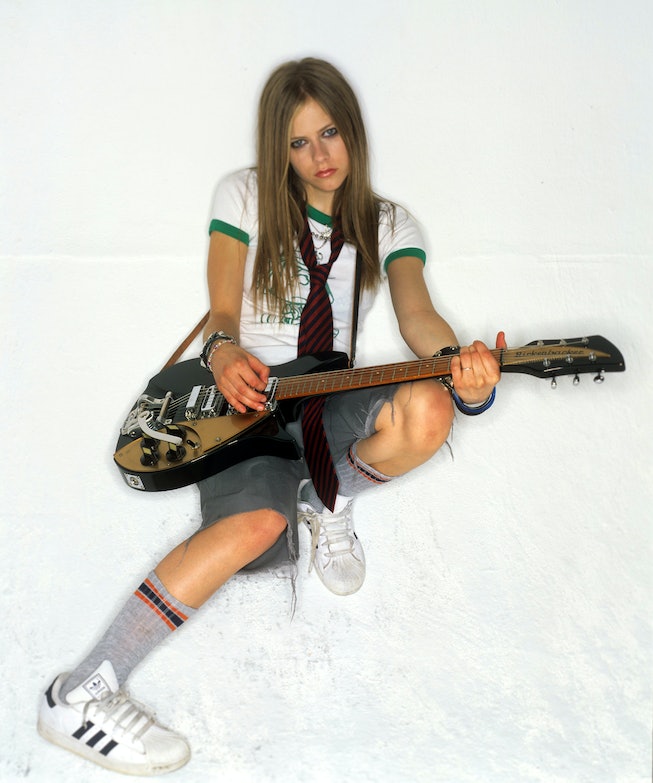 It was only a matter of time before pop-punk queen Avril Lavigne made some kind of big social media play to cash in on the resurgence of the pop-punk aesthetic, where black and red plaid skirts, pink taffeta, and studded belts rule. That moment is here: Lavigne made her TikTok debut on June 21 — with special guest star, skateboarder Tony Hawk — in a collaboration that could only be created by the well-oiled gears of the 20-year trend cycle.

In the video, Lavigne is perched on the lip of a half-pipe lip-syncing to her 2002 hit “Sk8er Boi” before the camera zooms in on her black cutoff tank and quintessential loosely tied neck tie and she’s suddenly replaced by everyone’s favorite dad, Hawk, who’s dressed in a similar outfit and does some skate tricks on the halfpipe.

Fans are into it, with many of the comments focused on how good Lavigne looks for being 36. One user wrote: “So ... we all just non-aging vampires now?” Another wrote, “She just woke up and decided she’s 20 years old.” MTV’s official TikTok account even slid in the comments, writing “probably still rockin’ up MTV tbh,” in reference to the part of the song where the skater boy’s band plays on MTV five years after the girl says “see ya later boy.”

Because they know we simply can’t get enough, Hawk posted a video of Lavigne skateboarding (and falling) on Instagram with the caption: “Breaking news: Sk8er Boi singer learns skating move from old Sk8ter Man,” on which Lavigne commented “Thanks for teaching me to drop in Sk8er Man 🤘🏻🛹🔥 legend.” Wholesome!

It’s been almost 20 years since her breakout record Let Go was released, which means Lavigne was due for a comeback, especially after a deeply sinister conspiracy theory that she died by suicide and was replaced by a doppelgänger named Melissa, who ushered in Avril’s unfortunate Harajuku era. Lots to unpack there, but for what it’s worth, last year she called the theory a “dumb internet rumor.”

NEXT UP
Culture
TikTok’s 2022 Discover List Is Here To Freshen Up The #FYP
Culture
Aly & AJ's "With Love From" Video Is A Postcard Of Melancholy
Culture
Jenna Ortega’s Childhood Hobbies Included Animal Autopsies
Culture
Remember When Gossip Girl Made The Quintessential Thanksgiving Episode?