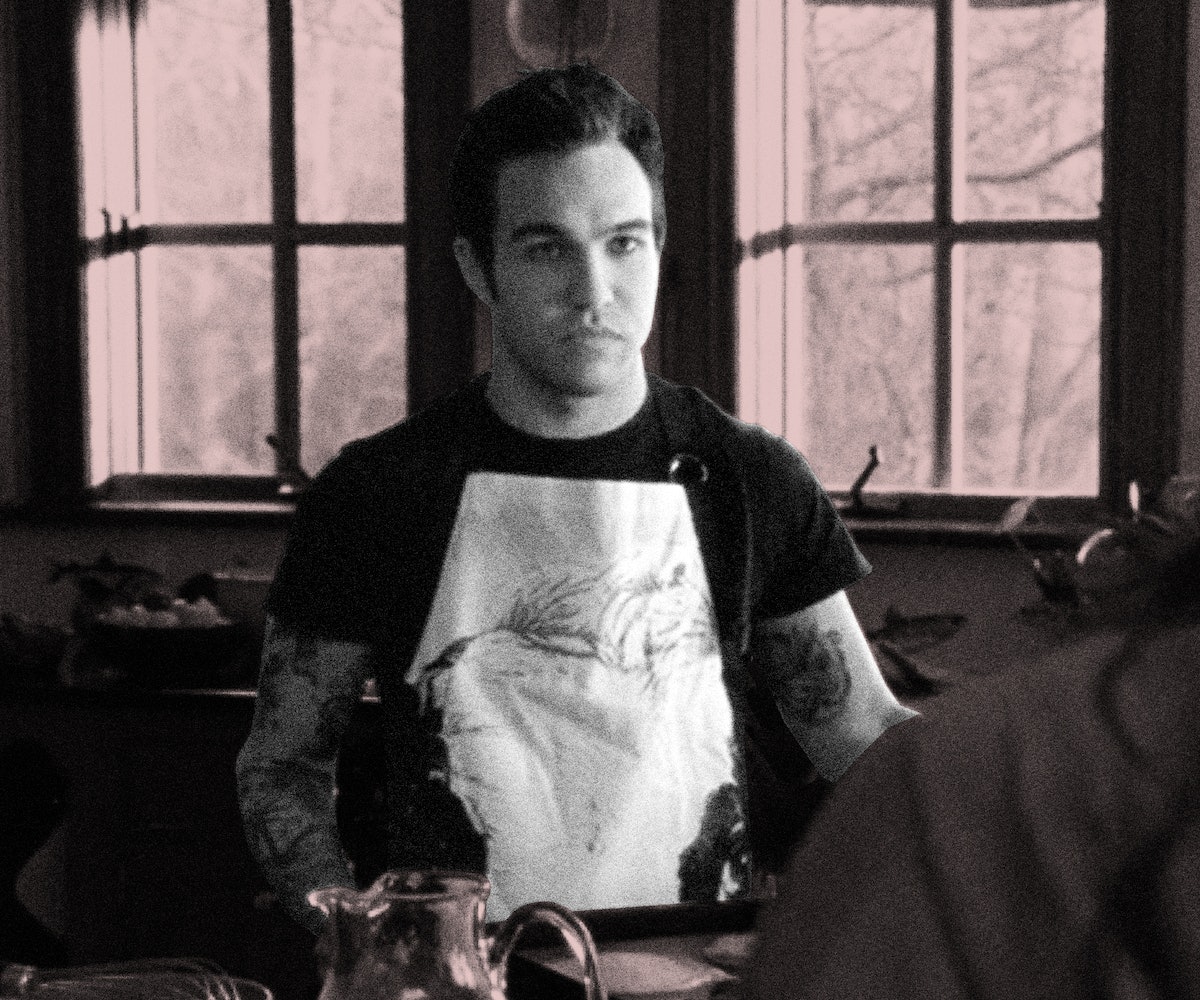 For a while, you could only find pop-punk in the narrow, sweaty corners of culture where it thrived. It existed solely in venues and bars and in low-budget music videos where everyone inexplicably wore the exact same pair of cargo pants and beat-up old Vans. It was a scene unto itself, and the polished, fresh world of pop culture at large rarely mixed with it, like two separate tables in the dining hall.

But then something started to shift. Around the turn of the millennium, pop-punk began to leak into pop culture, with artists occasionally soundtracking movies or making cameo appearances. As the decade rolled on, pop punk and pop culture became inextricably intertwined, the genre shifting out of the alt sphere and becoming mainstream in its own right.

Pop-punk artists made cameos in movies and on TV, their songs soundtracking proms and romantic moments and breakups. Mainstream stars found themselves wrapped up in pop-punk, too, on the arms of singers (see Nicole Richie and Joel Madden), wearing Sum 41 shirts (Nicole and Paris on The Simple Life) or sweating in grimy venues.

The moments when pop-punk and pop culture crossed over are countless; the decade, in many ways, was an exercise in scene and genre-hopping, as pop-punk broke free of its chains and got the recognition it deserved in the world at large, spanning genres and mediums.

Here are just a few of the most memorable crossovers you might have forgotten:

The O.C. is to be in part blamed, or thanked, for pop-punk and emo’s mainstream relevance in the mid-00s. Through whiny, nerdy protagonist Seth, a general teen audience got to experience the highs and lows of pop-punk fandom. Highs: going to see Death Cab For Cutie, Modest Mouse and The Killers retrospectively at local venue The Bait Shop with his friends. Lows: getting into an argument that ended in a car crash over Death Cab being like, “one guitar and a whole lot of complaining” with the girl he likes. Still, thanks to music supervisor Alexandra Patsavas and Seth’s annoying charm, a lot of kids had their eyes opened to pop-punk in the mid-00s.

2. No Doubt on Gossip Girl

Are No Doubt pop-punk? I don’t know. I do know that Gwen Stefani’s carefree spirit embodies that of all the pop-punk greats, and I do know that there is more crossover between pop-punk and ska than most people would like to admit, so it counts. Josh Schwartz’s second show Gossip Girl shied away from pop-punk more than The O.C. did, choosing instead to embrace pop artists like Lady Gaga, but its relationship with music was still tight, thanks again to Alexandra Patsavas. In this season 2 episode, “Valley Girls,” which is primarily a flashback episode and backdoor pilot about Lily and her sister’s past life, No Doubt play at a grimy underground show while the girls reunite, Gwen giving a cover of Adam and the Ants’ “Stand and Deliver” her all.

3. The Fall Out Boy arc on One Tree Hill

Where The O.C. laid the foundations for pop-punk to intersect with teen TV drama, One Tree Hill built their entire show on the premise, with the genre built into the DNA of its soundtracks, storylines and episode titles. Pete Wentz even appears as a character in an appropriately-titled three-episode arc — “In An Attempt to Tip the Scales” (Bright Eyes), “Just Watch the Fireworks” (Jimmy Eat World) and “When It Isn’t Like It Should Be” (Saves the Day), respectively. In the first episode, Fall Out Boy play at a benefit show at Tric, but Wentz then becomes a brief love interest for Peyton, visiting her in the hospital after she’s injured in a school shooting and cooking all of her friends breakfast. Is it chaotic, dramatic, and awkward? Yes. Is it iconic? Sadly, yes.

4. Good Charlotte in Not Another Teen Movie

When Good Charlotte released their debut self-titled album in the year 2000, they forecast their own involvement in pop culture with the line “we'll see you when we get there/on the video/or the radio/in the magazines, on the movie screens” in “Waldorfworldwide.” Sure enough, a year later, before the decade (or their careers, really) had even kicked off, the band appeared onstage at the prom in the 2001 spoof movie Not Another Teen Movie. Performing covers of teen movie classics like “I Want Candy” and “If You Leave,” the band lived out their dreams in tuxes just a year before they’d hit on mainstream fame with The Young and the Hopeless.

5. The Paramore track in Twilight

Twilight had a pretty strong relationship with emo and pop-punk in the mid-00s. Whether it was alternative kids who loved the movies or people mocking Edward and his sparkling broodiness for being emo, the two were interconnected. The soundtrack, again put together by iconic music supervisor and pop-punk fan Alexandra Patsavas of Gossip Girl and The O.C. fame, includes Linkin Park, Muse, and more than one Paramore track. Rumor has it My Chemical Romance were tapped to feature, too, but they rudely turned it down, choosing instead to write a diss track about the series. Paramore’s “I Caught Myself” plays briefly while the characters are out shopping, but “Decode,” the best track, doesn’t feature within the actual movie, which is criminal.

Disney’s Lindsay Lohan, Jamie Lee-Curtis and Chad Michael Murray-starring adaptation of the body swap comedy Freaky Friday quite rightly already has a place in the pop culture hall of fame for the cast alone. However, its soundtrack is where it collides with the world of pop-punk, too. Featuring tracks by Simple Plan, American Hi-Fi and Ashlee Simpson, it’s also home to a cover of Britney Spears’ classic “...Baby One More Time” by pop-punk band Bowling For Soup. The track plays in a cafe while Lindsay Lohan (in Jamie Lee-Curtis’ body) is getting coffee with Chad Michael Murray. “Am I so lame that I would love ‘...Baby, One More Time’?” she asks CMM, resident music and lameness expert. “This cover is a classic!” he replies, not quite realizing that it was recorded solely for the movie. The combination isn’t really so freaky: Bowling For Soup love movies, referencing them in their music videos and even releasing an album of their tracks for movies and TV.

7. New Found Glory’s From the Screen to Your Stereo

Pop-punk’s primary point of contact with the real world, other than film and TV, is through covers, and nobody does covers better than New Found Glory: in fact, at this point in their career, it’s maybe fair to call them a covers band. They’ve released countless versions of other people’s songs, even adding their own spin on Arrested Development’s “Tennessee” for Punk Goes Crunk in 2008, with (white) lead singer Jordan Pundik unironically singing the words, “I am black and proud.” Less cringy, however, are New Found Glory’s three (!) albums of classic movie soundtrack covers, among them: “My Heart Will Go On,” “Kiss Me,” and a cover of “Iris” that almost rivals Phoebe Bridgers’. It’s impossible to be cynical when they give it so much heart.

8. All American Rejects’ “Gives You Hell” on Glee

For just a minute, teen drama Glee functioned as a bridge between alternative music and pop culture. There wasn’t a genre that was immune to being given the glee club treatment, and from My Chemical Romance’s “Sing” to Paramore’s “The Only Exception”, Lea Michele tried her best at taking as many songs in the pop-punk canon as possible three octaves higher. For some reason, though, it’s her cover of All American Rejects’ “Gives You Hell,” wherein she somehow turns it into a teeny-bopper anthem while singing aggressively in Finn’s face that really cements its status as a stage for pop-punk crossovers.

The early-00s stunt show Jackass was, down to its very DNA, linked closely with alternative music, whether through Bam’s brother Jess Margera’s band CKY featuring on the soundtrack or their friendships with HIM. Jackass embodied alternative culture, in part because skater, and in turn slacker, culture is closely related to subculture. A pop-punk crossover moment you might have missed, however, is when Weezer appear in the end credits of Jackass 3D to sing “Memories” in the booth with their friends, the Jackass crew, before they take over and have a go. It’s used to wholesome and nostalgic effect, showing the softer side of both genres. The video, too, was shot on the Jackass set: very sweet.

One of the most memorable pop-punk crossover moments of all time, perhaps, is the “Scotty Doesn’t Know” scene in 2004’s sex comedy EuroTrip. Written and recorded by pop-punk band Lustra for the movie but performed by Matt Damon, the track doesn’t just feature in the movie but acts as a plot device, letting the poor, sad main character (Scott) know that his girlfriend, Fiona, has been cheating on him with the lead singer (Matt Damon, but not). The song, despite not actually being real, per se, is maybe one of the best pop-punk songs of all time. The movie is less good.

Pop-punk and trashy teen comedies, particularly sex-oriented ones, just go hand-in-hand, possibly due to the inherent immaturity in both genres. While the American Pie soundtrack is full of pop-punk hits, like Blink 182’s “Mutt” and Third Eye Blind’s “New Girl,” the really fun cameo is when Blink 182 themselves appear for just a second — blink and you’ll miss it. In the infamous scene wherein Jim broadcasts a friend getting naked in his room without her consent before having sex with her, Tom, Mark, Travis and their pet monkey are among the hundreds of people watching. In hindsight, the scene is less funny, and more traumatic.

12. An “Honorable Mention” for Fall Out Boy in...everything

Fall Out Boy put in their time with the pop culture world, and they deserve a list of their own: a pre-fame Kim Kardashian appearing in the video for “Thnks fr the Mmrs,” the band’s appearance in Seth Green comedy Sex Drive, Pete Wentz marrying Ashlee Simpson, Wentz introducing Lady Gaga at the 2009 VMAs, their appearance in Family Feud, and a key moment that’s often looked over, Wentz’s brief appearance facing off with David Duchovny in the 2008 comedy series Californication. In fact, maybe we can thank Fall Out Boy for the general mainstreaming of pop-punk.