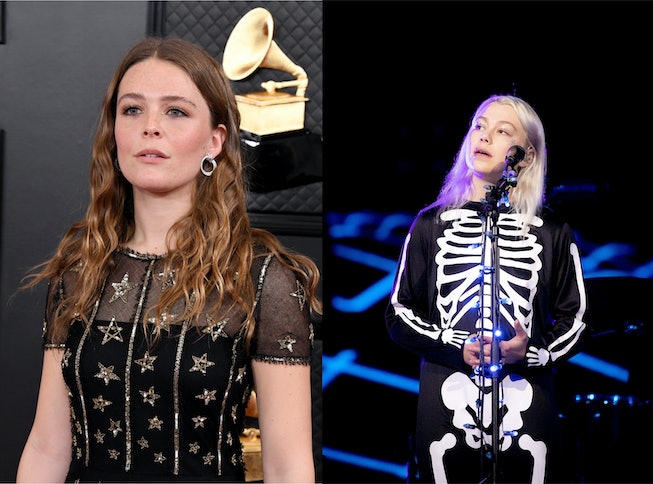 Run — don't walk — to hear Phoebe Bridgers and Maggie Rogers cover the seminal classic (and early aughts romcom anthem) "Iris" by the Goo Goo Dolls. Per Rogers, the cover will be "alive for 24 hours on Bandcamp" and all proceeds from its purchase will go toward Fair Fight, the Stacey Abrams-founded voting rights organization that was largely credited for Georgia's Democratic flip in the 2020 Presidential Election.

Bridgers first teased the track on Election Day by tweeting that she would cover the song if Trump lost the election. Effectively putting everyone in a tizzy — including the Goo Goo Dolls, apparently — she's now made good on her promise. The spare, and acoustic tune is a no-frills and stunning rendition, that features Bridgers and Rogers harmonizing their way through the iconic song's crashing and heart-wrenching — even decades later — chorus.

This new cover closes out a monumental 2020 for Bridgers, who released her widely celebrated sophomore album Punisher earlier this year. The young singer-songwriter recently also announced a follow-up EP called Copycat Killer, which will include four Punisher songs that have been re-recorded with Grammy award-winning arranger and string player Rob Moose; the project is expected to drop November 20. Like "Iris," Copycat Killer will have a limited vinyl release — only 1,500 copies available for purchase via Rough Trade.

Download Bridgers and Rogers' cover of "Iris" on Bandcamp, and then revisit the original below.