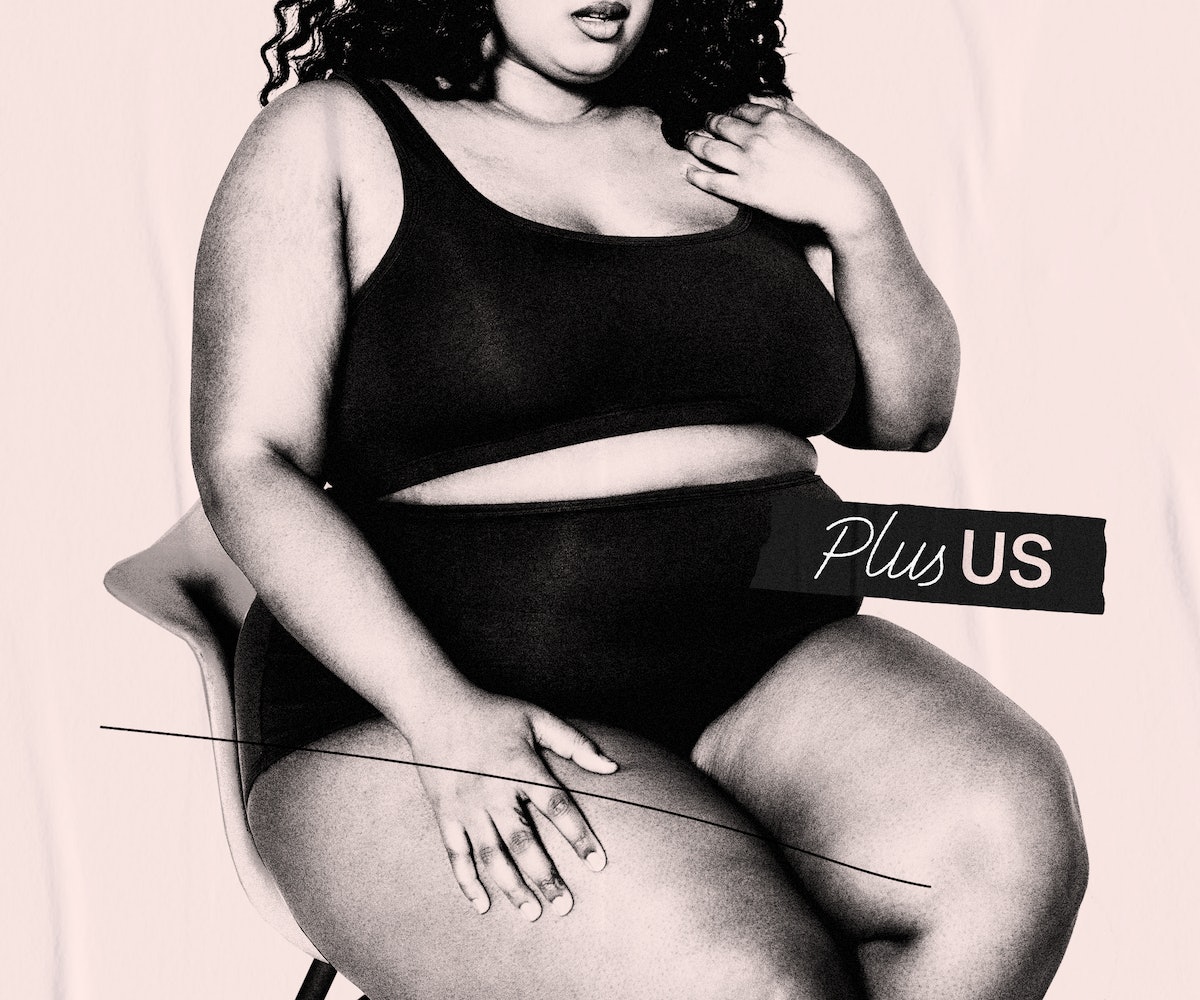 Despite efforts to normalize body diversity, anti-fatness runs rampant throughout society today. From medical fatphobia to the fashion industry’s slow moving progress towards size-inclusivity, the body positivity movement has, in many ways, made far less systemic progress than it claims. Yet despite the ways society at large still perpetuates hate towards bodies that don’t fit the thin ideal, a larger problem must be addressed first for progress to take place: dismantling anti-fatness from within the fat community.

The commercialization of body positivity has led many to believe that plus-size women and men are all strongly connected, a united front with a clear vision in mind. However, over the past two decades, divides have begun to form from within the community, causing many to lose interest in the mission at hand.

“Internalized fatphobia is so bad they think it’s body positivity,” says Saucyé West, a plus-size model and fat activist who has experienced this divide firsthand. When entering the industry, West recalls not being considered “socially acceptable” enough to be a model due to her size, even in the curvy market. “I didn't understand why on the spectrum of fatness, one size was considered better than the other,” she says. “I was told by designers that I needed to lose weight, that I needed to become more hourglass, I needed to wear Spanx, and needed to smooth out my stomach to make it one cohesive belly.”

Much of the representation we see today stems from the work of curvy models. Trailblazers like Ashley Graham broke down barriers that allowed the conversation around size-inclusivity to go mainstream. But with that came this new body ideal: the “acceptable” fat body, which usually constitutes a size 14 to 18 hourglass figure. This new norm wasn’t too fat where it made thin people uncomfortable, but just fat enough where bodies could still be sexualized and viewed as attractive. In and of itself, this new plus-size ideal created a divide that largely stands today of women above and below a size 22/24, erasing those of higher sizes — commonly referred to as superfats and infinifats — from the conversation.

“I genuinely believe that there's space for everyone in this community and that we all have a different level of contribution to the conversation,” says Corissa Enneking, creator of Fat Girl Flow. “But I think oftentimes, what happens when we're talking to smaller models is that they forget to include larger sizes and speak up about larger sizes. I honestly think that it may just be because they don't have anyone around them that's our size.”

West adds, “This ideal then has a domino effect on the consumer, because they're feeling like, ‘I don't see a body like mine, how do I fit in to this community? Are they going to make clothes for me, or is my only option to lose weight in order to fit into plus-size fashion?’”

Much of this has become evident by the removal and selective use of labels. Many curvy models on the smaller end of the size spectrum have advocated against the use of the term “plus-size” in hopes to normalize size-inclusivity across the board without needing to make it it’s own category. In an ideal world, that would be the common goal: for all brands to make clothing in sizes 0 through 40, and for all sizes to be accepted in line with what true inclusivity stands for. But rather than push for that, the hatred towards the terms “plus-size” or “fat” has only created more hostility and confusion from within the community.

“The more people get rid of the terms like plus-size and self-love, not wanting to use the term 'fat' and using more terms like 'fluffy,' the more convoluted the message gets, and the deeper that fatphobia goes,” says West.

In any marginalized group, labels and micro labels can have two polarizing effects. On one hand, they can create a feeling of community and togetherness, while on the other, they can split people up in ways that cause an irreversible disconnect — and the latter appears to be happening within the plus-size space. Enneking believes that much of this stems from miseducation on the topic of fatness, and of the foremothers of this community, tracing back to the fat acceptance movement of the late 1960s.

“It's not that [those on the smaller side of the fat spectrum aren’t] necessarily not treating us well. It's that they're just a little bit misinformed. The larger you are, the more you are judged on how acceptable you look. We really aren't giving people the option to even try to fit into that presentable category, and it feels like an entire industry has kind of forgotten your existence.”

These levels of internalized fatphobia all seemingly trace back to the way society has taught us to think about fatness. And even some within the body positivity community — including those who are loud and proud advocates — may struggle to completely rid themselves of these deeply ingrained teachings and beliefs.

“For a lot of these plus women, if they're talking and reacting negatively to a body that is not that beauty ideal that they're used to seeing, what does that say about how they feel about themselves?” says Marcy Cruz, a writer and board member of the National Association to Advance Fat Acceptance.

While each individual within the community is on their own personal body journey, projecting that internalized fatphobia onto others has become increasingly common in statements like, “I’m fat, but I’ll never be that fat.”

“That's not how real inclusivity works,” Enneking says. “We really are starting to come around to this idea that smaller plus-size women are the norm. But we haven't made space for anything beyond that yet.”

Internalized fatphobia takes many forms, one of the most prevalent being the need to prove that while you’re fat, you’re also living a “healthy lifestyle.” Many within the plus-size community feel the need to defend their fatness by showing their fitness level or diet, furthering the notion that weight and worth are interconnected, when that is inherently false.

“We always have to prove that we're healthy [to be respected],” West says. “And I think that the body positive community always pushes that narrative as well. They’re claiming body positivity but also centering diet culture within it.”

Sabrina Servance, an influencer based in Florida, adds, “It almost comes across as you don't want to be fat, but you happen to be fat, and you might as well make money [off this community] while you're fat.”

West also points to the fact that anti-fatness is deeply rooted in racism, a problem dating centuries back that is often still ignored in society today. The two forms of oppression often go hand in hand, and just as many would do well to check themselves regularly on their anti-fatness, they must do the same regarding anti-Blackness. Many of the Black women who created this community decades ago have been completely erased, and even today, those fighting for change receive far less attention and support than their thinner, White counterparts.

"For a lot of these plus women, if they're talking and reacting negatively to a body that is not that beauty ideal that they're used to seeing, what does that say about how they feel about themselves?"

“The internalized fatphobia even within the Black community is so deeply rooted. Black people automatically think that because we're fat, we're gonna have diabetes, as if diabetes is a Black person's disease, and it’s not. Within our community, as far as Black people are concerned, we rely so much on what the medical industry tells us of how we should be. And then that spills over into how we treat fat folks within our community, and how we even talk to each other.”

Servance points to the passing feelings of hope that came over the past few months as brands and influencers within the plus-size space in particular joined together to “amplify melanated voices,” an outcome of the recent height of the Black Lives Matter movement. “I feel like the community hasn't collectively felt supported in a long time, and it felt so nice to me as a Black woman to see that everybody's on the same page. But then it became just another trend.”

Anti-fatness within the fat community is perpetuated on many levels, from pushing the ideal of the “acceptable fat body” to its ties to racism and anti-Blackness. These issues are so deeply rooted that they’ve separated the community into fighting for different movements: body positivity, body neutrality, self-love, fat acceptance, fat liberation, etc. And while having separate yet related causes does not water down the message at hand, the lack of a united front makes our voices that much less powerful. To progress forward in a meaningful, long lasting way, we must dismantle the internalized fatphobia that lives within us, and form a united front to fight for true inclusivity.

“We have to normalize all bodies, [both within and outside our community],” Cruz says. “Everybody is different. That hourglass shape and the flat tummy is not really majority of plus women. Every plus body carries their weight in different places, and we have to fight for them all.”

NEXT UP
Life
19 Self-Care Gifts For Your Friend Who Needs To Relax
Beauty
An Honest Review Of The TheraFace Pro
Culture
Emma Chamberlain Inks Exclusive Spotify Podcast Deal For ‘Anything Goes’
Culture
On The List (With Melissa Rich): Is The Party Venue Recession Upon Us?