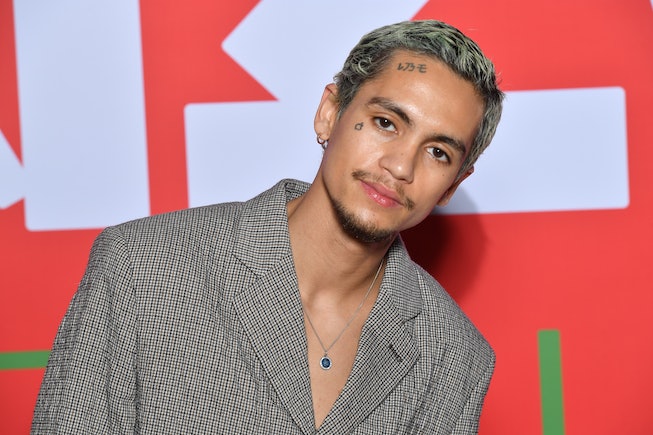 Euphoria co-stars Hunter Schafer and Dominic Fike are quickly becoming our favorite new celebrity couple. First spotted holding hands in January, they’ve since made their relationship Instagram-officially a number of times (including adorable vacation pics). Last night at the Oscars, they also made it red carpet official, and to celebrate marked their debut with two iconic hair looks.

Dominic Fike became best known for his look on Euphoria featuring his bleached soft curls. Since then, he’s switched up his hair by going shorter and dyeing it teal. But most recently, he took the occasion of this year’s the Vanity Fair Oscar Party to debut a fresh bright blue buzzcut. He’s the latest in a long list of people using a buzz cut as a blank canvas for colorful creativity. Hairstylists like Janina Zais have created flame patterns and rainbow designs on freshly bleached buzzcuts and Gossip Girl reboot star Evan Mock has become best known with his signature pink buzzcut.

Walking arm-in-arm beside him on the Vanity Fair after-party red carpet, Schafer also tried a new hairstyle — wearing long blonde extensions (after chopping her hair into a bob last year). Schafer’s hair was slicked down for a wet look, with a middle part and long face-framing strands sectioned to fall before her ear, behind it, and then the rest of her hair slicked to the back. The combination of both the new hairstyles made for the most interesting couple’s red carpet hair moment we’ve seen this year so far.

This buzzcut has been trending since 2020— where it became a symbol of a person whose lockdown isolation might have pushed them to the edge. Since then, it’s been reclaimed by fashion’s It girls (and It boys). It was also officially the cool hairstyle of summer of 202i when Gen Z model Iris Law told British Vogue shaving her hair off “changed her life” and Willow Smith reshaved her head after rocking a buzzcut on and off for years.

While the buzz around buzzcuts seemed to slow down during the past few months (we can probably blame winter for that), Fike’s new hair proves summer will once again be filled with colorful and sometimes patterned freshly-shaved hair. It also makes the buzzcut a hair transformation that keeps on giving, suiting every celebrity we’ve seen opt for the dramatic hair change— something icons like Britney Spears, Michaela Coel, and Keke Palmer have known for years.