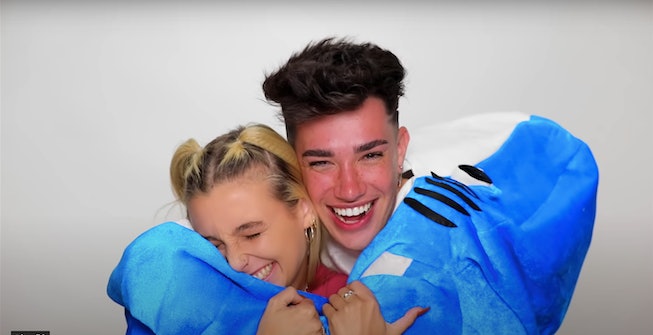 2020 is apparently full of surprises, and while most have been absolutely terrible, there is good news for former fans of The Sister Squad. Following speculation regarding the end of their friendship, James Charles and Emma Chamberlain reunited, and they naturally celebrated with joint YouTube videos.

Prior to Tuesday's public reunion, there had been rumors regarding the once publicized friendship of Chamberlain and Charles. At one point, the pair had unfollowed each other on Instagram, Buzzfeed reported, and their habit of appearing together on social media and in videos was no more.

That all changed this week, when the YouTubers traded off appearances on each other's channels. In a video for Chamberlain's channel, Charles was willing to undergo a makeover, and in a video on Charles's channel, the makeup artist allowed his friend to style him for a week.

In the YouTube videos, the two addressed their reunion, and as it turns out, much of their previous time apart wasn't caused by anything majorly dramatic. As Chamberlain explains, "It wasn’t that there wasn’t anything weird at all, it’s just that we hadn’t spoken, and we were doing our own thing." The two don't detail the exact length of time they had gone without speaking, but Chamberlain credits a mutual friend with pointing out that it had around a year.

According to Charles, he had attempted to reach out to Chamberlain a number of times, but was unaware she had changed her number. "It was really weird, too, because I had tried to reach out to Emma like three times, but she had changed her phone number," he said. He went on to reveal that he had texted her a congratulatory message following the launch of Chamberlain Coffee. "I would never not respond to somebody's text," Chamberlain says. "When he told me that, I was f*cking mortified."

Since their initial phone conversation, the pair have continued to hang out, and their renewed friendship culminated with the debut of these two new videos. See the hilarious reunion for yourself, below.