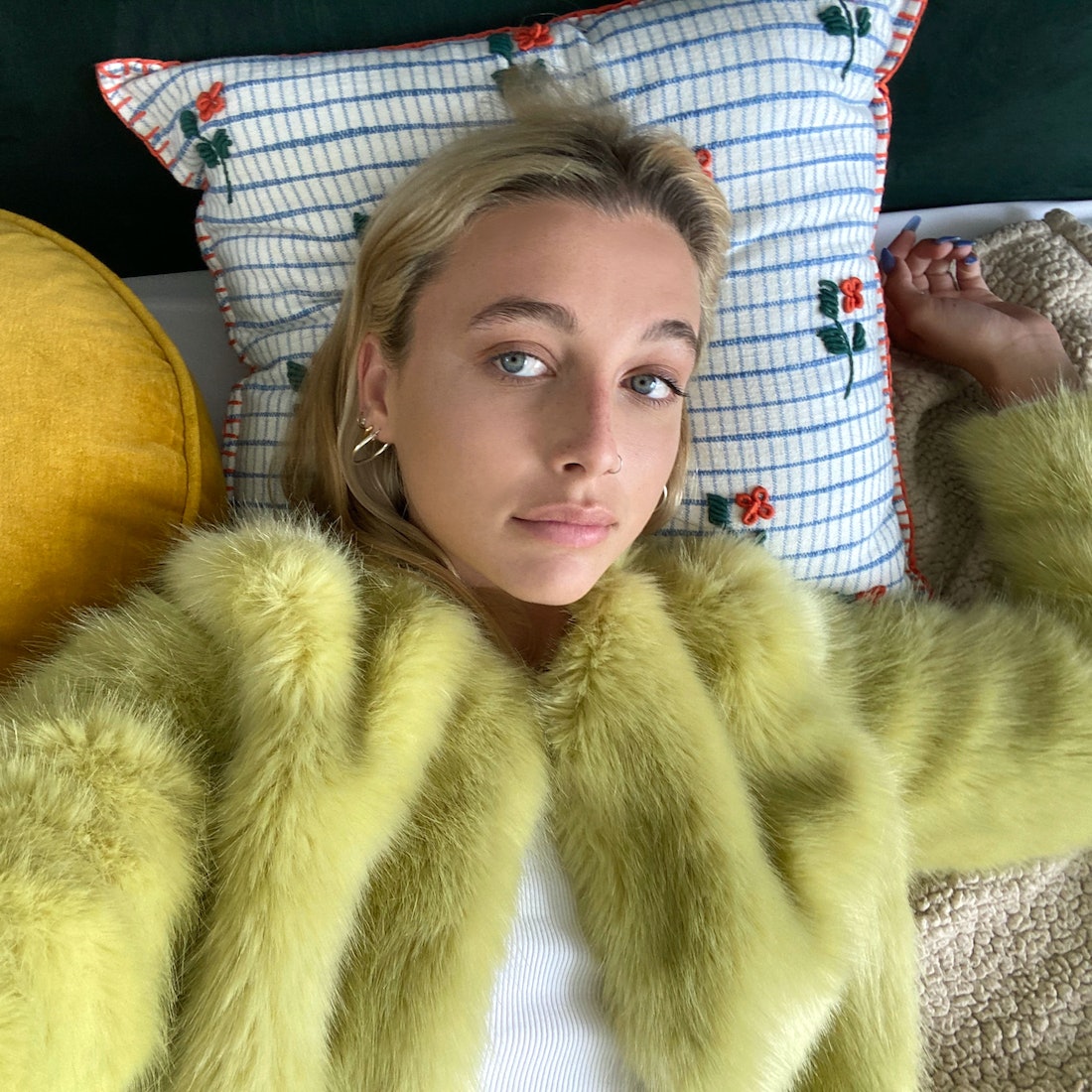 A Night In With Emma Chamberlain

The YouTube star talks her new planner, making videos in quarantine, and the advice she gave Charli D'Amelio.

You might not be able to tell from her signature chaos-infused YouTube videos, but Emma Chamberlain is a planner. Her channel may be all random tangents and spontaneous interludes, but her real life — the one you can't see in carefully edited 17-minute vlogs — is scheduled out, day by day, menial task by menial task. “I use a planner every day. I literally have it on my chair over there,” she says over Zoom from her Los Angeles home. “It's nice to just wake up, look at it, know exactly what I have to do that day, and [I] can mentally plan, 'OK, what order am I going to do this in?' Then I don't procrastinate as much because I'm inspired seeing it all in front of me, and I have the satisfaction of crossing things off. It's weirdly not 2020 of me to be so obsessed with a planner. But I think that it really, really truly is underrated, even though it's a little scrappy at times.”

Indeed, 2020 may not be the year to plan for, when nothing seems to be going as planned, but the 19-year-old social media sensation has never been one to play by the rules. Enter The Ideal Planner, Chamberlain’s literal ideal version of a planner and her latest business venture, available for purchase next week. “A lot of planners to me were just corny,” Chamberlain explains. “I was like, ‘Let's do a little spin on this. Let's make it fun.’ So there's fun little activities in it that are relaxing, and can help with anxiety, because I think planning could be anxiety-inducing. Those go hand in hand.”

When you think about it, it makes sense: You don’t become a Gen-Z icon with 9.25 million YouTube subscribers and almost 10 million Instagram followers without some sort of plan. As internet lore goes, Chamberlain became one of the most popular creators on YouTube organically, thanks to her unique style of editing and refreshing sense of humor, but it was hard work and some serious planning that made her star grow beyond just another funny girl online.

Beyond The Ideal Planner, there’s also a podcast, Anything Goes with Emma Chamberlain, on the podcast network Ramble. Then there's her own coffee brand, Chamberlain Coffee, which the noted coffee-fanatic calls her “passion project,” before clarifying that the beverage in the giant tumbler that she’s currently sipping from at 5:30 p.m. is water. “Super off-brand,” she notes. “The opposite of what we know me as.” Rest assured, she’s still on a steady diet of two to three cups per day.

She’s also in the process of expanding the brand’s product line beyond its current offering, packs of single-serve steeped coffee bags. “It's been this crazy process of figuring out what's next,” she says. “I don't think I've ever worked this hard on something. This might be more crazy and difficult than my YouTube ever was. But really soon, we're doing a lot to it. That's all I'm going to say.” Her ultimate goal is to open a chain of Chamberlain Coffee shops around the country. “That is my dream,” she reveals, adding, “It's been so cool doing something like this, and getting compliments about my coffee. Some people are like, 'I don't even watch your videos, but I really like your coffee.' That's really cool to me.”

Of course, there are still plenty of people who are watching those videos (3.6 million and counting, to be exact, on her most recent one titled, “Starting Internet Beef”). While she’s made the most of her circumstances over the past few months in quarantine (other video titles include “Making Ugly Jeans Cute,” “Ultimate Burrito Taste Test,” and “Getting My Life Together *glow up, kinda*”), Chamberlain admits that finding new ideas during self-isolation has been challenging.

“I have to take a week off this week because I'm out of things to do at home,” she says. “ A lot of my content used to be travel-related, so a lot of my go-to things I can't do. I used to make three videos about Coachella a year. That was canceled. So there went that. Or if I'd go to something relating to fashion, like a fashion show, I loved filming that. And so that's all gone. Now every week, I'm like, ‘Huh, I don't know what it's going to be.’ Luckily, I’ve pulled some stuff out of my ass. I really think that it has forced me to come up with things I would have never come up otherwise, and I think that that's good. So no regrets.”

When not making videos or running one of her many business endeavors, Chamberlain has been doing what everyone else has been doing in quarantine: ordering lots of Postmates, spending time outside, and dyeing her hair. Right now, it’s newly blonde and piled on the top of her head in a messy topknot, after a brief stint with a half-blonde, half-brunette situation. (“In retrospect, I hate how that looked,” she says. ”But it was a fun idea at the time.”)

And then there’s TikTok. “I mainly just like watching it, to be honest,” Chamberlain, who boasts 7.2 million followers on the app, says. “A first I was like, ‘I don't know if I can do this and not be cringey.’ And then I had a cringey phase a little bit, meaning me and my friend would do the dances very hardcore as a joke, but nobody thought it was a joke in retrospect. I can tell that everybody was probably like, 'Oh, they were actually trying.' In retrospect, I want to go back and delete them, but it's part of my past; they're permanent and they're on the internet.”

Offline, she’s also become friends with two of the app’s most popular creators, Charli and Dixie D’Amelio, with whom she shares the same management team. “Occasionally, [Charli] will ask me for advice, because I think that we've struggled with a lot of the same things,” Chamberlain explains. “I know exactly what she's dealing with, and from people speculating things about your relationship to dealing with people constantly judging you, and saying things about how you look, or what type of person you are. I told her, when she first moved here, ‘You can call me anytime; you can text me anytime. I just want to help.’ And I say that to everybody, because I really just don't ever want somebody in this spot to feel like they don't have a support system.”

Still a teenager herself, Chamberlain’s own inner circle is tight, with just a few close friends with whom she is extremely close. Earlier this year, she moved into a new house and has been busy curating the right design to make it feel like home. “When you move into a house, there's a different vibe,” she explains. “It's like a dream, because I've always wanted to live in a house; I always lived in apartments, so this is awesome.” Her favorite room in the house, she says, is her closet, but her most used space these days is her bedroom.

“I definitely am having a lot of lazy days, and still some productive ones, too,” she says. “I feel guilty sometimes about the lazy days, but then I remember there's nothing else for me to be doing, so I just had to lean into it... I mean, talk about self-discovery and all that. I am a new person. I don't even know who I was before this whole thing started. The lessons did not end; they just kept coming. And some of them were good, and some of them were painful. But I think that that's honestly really, really good. I'm grateful for it.”