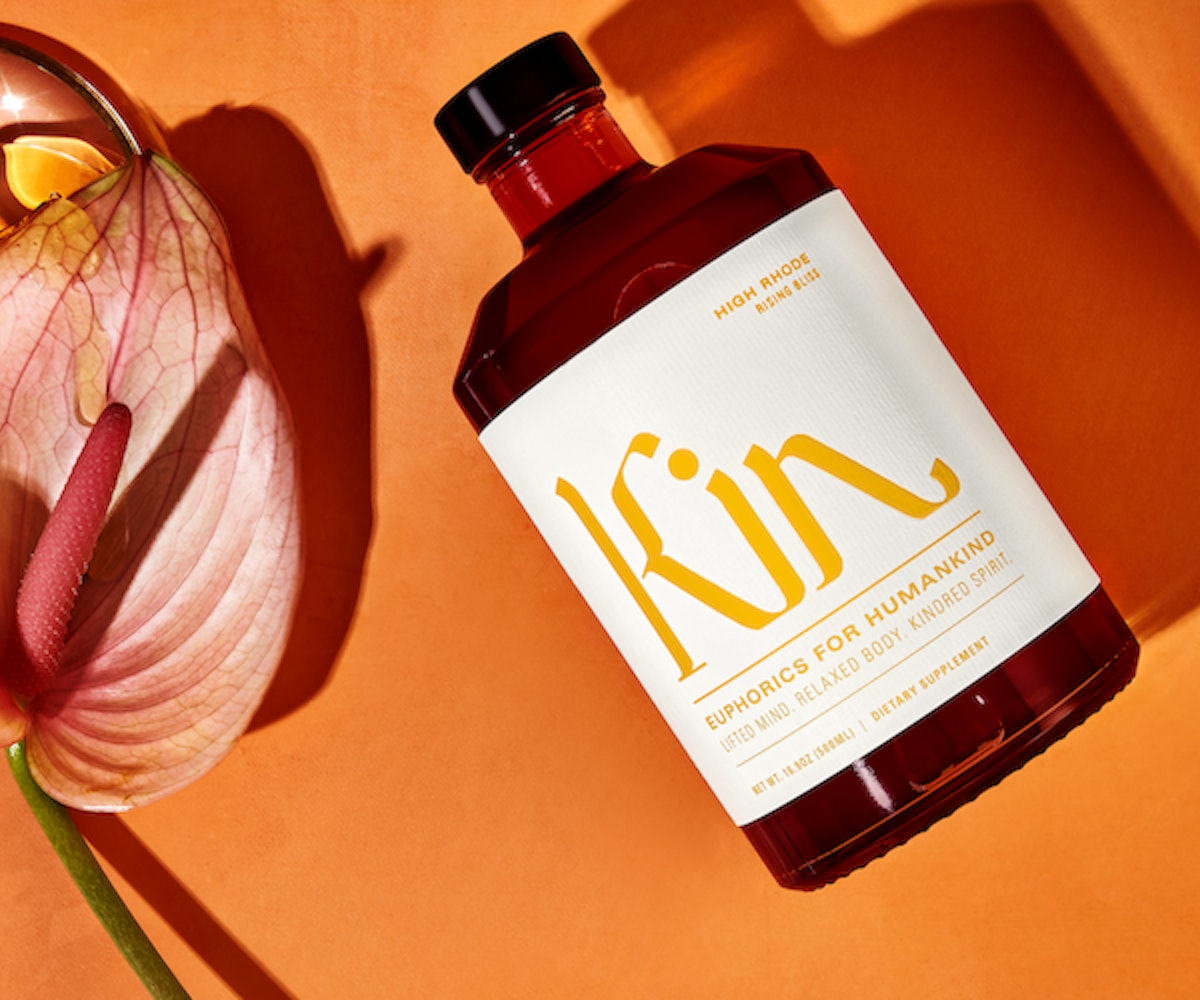 When I came across Kin and its non-alcoholic beverage High Rhode, described as a "euphoric" that promises the feeling of "all bliss," I was intrigued, to say the least. Bliss? No booze (or any illegal substance, for that matter)? I had to try it out.

My relationship with alcohol has, in my late 20s, been an on-and-off sort of thing. I often dabble with bouts of sobriety, from a few weeks to up to six months, to cure problematic skin and bloating or clear my head and soothe my anxiety. However, during these times, I often find myself missing some of the social benefits—and, okay, fine, the fun and carefreeness—that comes along with having a couple of drinks with friends after a long week.

What Is A Euphoric?

It can more or less be described as a dietary supplement (but more on that later). According to Kin founder, Jen Batchelor, euphorics—a classification she and her team created for Kin to fall under—is "a new category of adult beverage intended to bring conscious connection to the bar. In a word, they are how they sound—a drink to make you feel something, preferable elevated, connected, joyful."

Batchelor explains that High Rhode consists of a stack of nootropics (a compound that supports or enhances cognition and executive brain function, some natural and some lab-derived, to round out its blend of adaptogens, like rhodiola, and botanics, such as hibiscus, gentian, and licorice. "The nootropics we've chosen to use in High Rhode are intended to support cognitive faculties in a way that is subtle, but significant enough to help the Kin drinker achieve the kind of presence they desire to feel with their loved ones at the end of a long day or start to a great night," says Batchelor.

She goes on to explain that, while synthetic, the ingredients are chosen with the utmost care and research. "Because nootropics are still in their infancy as far as performance-enhancing compounds [that don't require prescription] are concerned, and we are the first to use them in microdoses for the purpose of recreational enhancement, we prefer to get our nootropics from trusted chemists so we can ensure the safety and integrity of the effect," she says.

"We believe the modern evolution of the social libation should require a creative marriage of pioneering innovation while paying homage to its ancient history, and we're proud to use the biotechnology available to make that happen," says Batchelor. "Best of both worlds."

I'm not going to lie, I went into it expecting Kin to be bullshit. I've thrown adaptogenic powders into my smoothies, and I've sprinkled nootropic mushrooms into my coffee, and have tried a thousand other Goop-recommended tinctures, powders, and supplements, and never once did I notice anything feel any different. And, I'm sorry, I think that CBD is great for topical pain and the occasional anxious day and whatnot, but most times I drink a CBD beverage, I just want to take a nap.

"We believe the modern evolution of the social libation should require a creative marriage of pioneering innovation while paying homage to its ancient history, and we're proud to use the biotechnology available to make that happen. Best of both worlds."

But when I first tried Kin by having a couple of drinks at home with my husband, oh, I definitely felt something. It tastes rather herbal and earthy—which, I found to be quite nice. However, to fully enjoy Kin as a "cocktail" (mocktail?), I found that having it with a bit of sparkling seltzer and something on the sweeter side (I tried it with a variety of natural fruit juices) made it more enjoyable without making it overly sweet.

It began to kick in within about 15 minutes or so. When I noticed myself start to laugh uncontrollably at a (not that funny) joke my husband made (while the horrors of Chernobylplayed in the background, no less), I knew something about me had been altered.

It's hard to really put into words what a "rise" feels like. I felt giggly and warm in a way that is somewhat comparable to feeling slightly tipsy or a little bit stoned, but minus the anxiety, or the sloppiness, or sluggishness, or the urge to keep going to "get fucked up." I just felt, simply put, nice.

The second night, I wanted to take Kin out with me. Because it's is sold in a large 500mL glass bottle, its not exactly easy to throw into your purse and bring with you to the party (I asked some of my friends if they had a "chic flask" I could borrow, and got back pretty puzzled looks in return), I opted for having a couple of drinks at home before making my way out. While I definitely felt myself "rising" while en route to a friend's birthday party and feeling quite fuzzy and nice in the early moments of the evening, the effects do wear off in about an hour. Therefore, if you're planning to have a late night, you're going to want to figure out a way to bring it with you.

But, back to the drug thing. Based on what I've described as feeling, some may ask, Is High Rhode actually a drug? Batchelor describes it as such:

In short, no, Kin is not a drug, but a beverage. The long answer: it depends on who you ask. If we had to put a label on Kin other than "a euphoric," we would say "dietary supplement." But, that would be an attempt to satisfy a requirement imposed on us by the government, or governing body(s) that aren't proactively governing at all. A drug, by definition, or if you ask Wiki, is anything that isn't food that also has the ability to alter physiology or psychology. One can argue that this can include images, a video game, etc. Kin falls somewhere between an entheogen [a chemical substance ingested to produce a nonordinary state of consciousness for religious or spiritual purposes] and meditation. Hence, the need for its own nomenclature.

What You Need To Know Before Trying Kin Euphorics:

Batchelor explains that, while it's been designed to evoke a feeling that one may feel after having a drink after a long day, you can drink it anytime you please. "Many, if not most, of our cultural rituals are centered around and call for a particular type of libation, but they can also inspire or implore a certain kind of vibe," says Batchelor. "With that in mind, we've designed our first formulation around how one might want to feel during happy hour—that one glass of wine feeling, slightly buzzed and the opposite of sluggish and sloppy. We call it 'rising' for this reason. But, you can certainly drink High Rhode whenever you're in the mood to rise."

All in all, Kin is definitely the beginning of a new way of letting loose—one that's certainly beginning to catch on. And based on my own experience? Yeah, I get it. "I believe the movement to abstain from or moderate our alcohol consumption is here to stay, much like the shift away from cigarettes in the 2000s," says Batchelor. "It's impossible to un-feel the benefits of this new way of reveling. In our short time on the market, we've amassed hundreds of thousands of reactions: from fandom, consumers, guests, and inquirers to detractors, copy-cats, and bullies. Kin's articles and parts of our website have been translated into six different languages, and it's been smuggled into over 10 countries that we now know of. People all over the world have been waiting for something like this, now all we have to do is live up to the hype." Which, in my experience, they absolutely do.

You can order Kin online at KinEuphorics.com or purchase at Calmist in Los Angeles or Clover Grocery in New York City.

NEXT UP
Beauty
Meet Erika “Babygirl” De Leon, The B-Girl Who’s Empowering A New Generation of Female Breakers
Beauty
It Looks Like Grimes’ Body Modification Journey Has Begun
Life
A Studio Ghibli-Inspired Cookbook Is Coming To A Kitchen Near You
Life
On The List (With Melissa Rich): The Highs & Lows Of Solo Partying