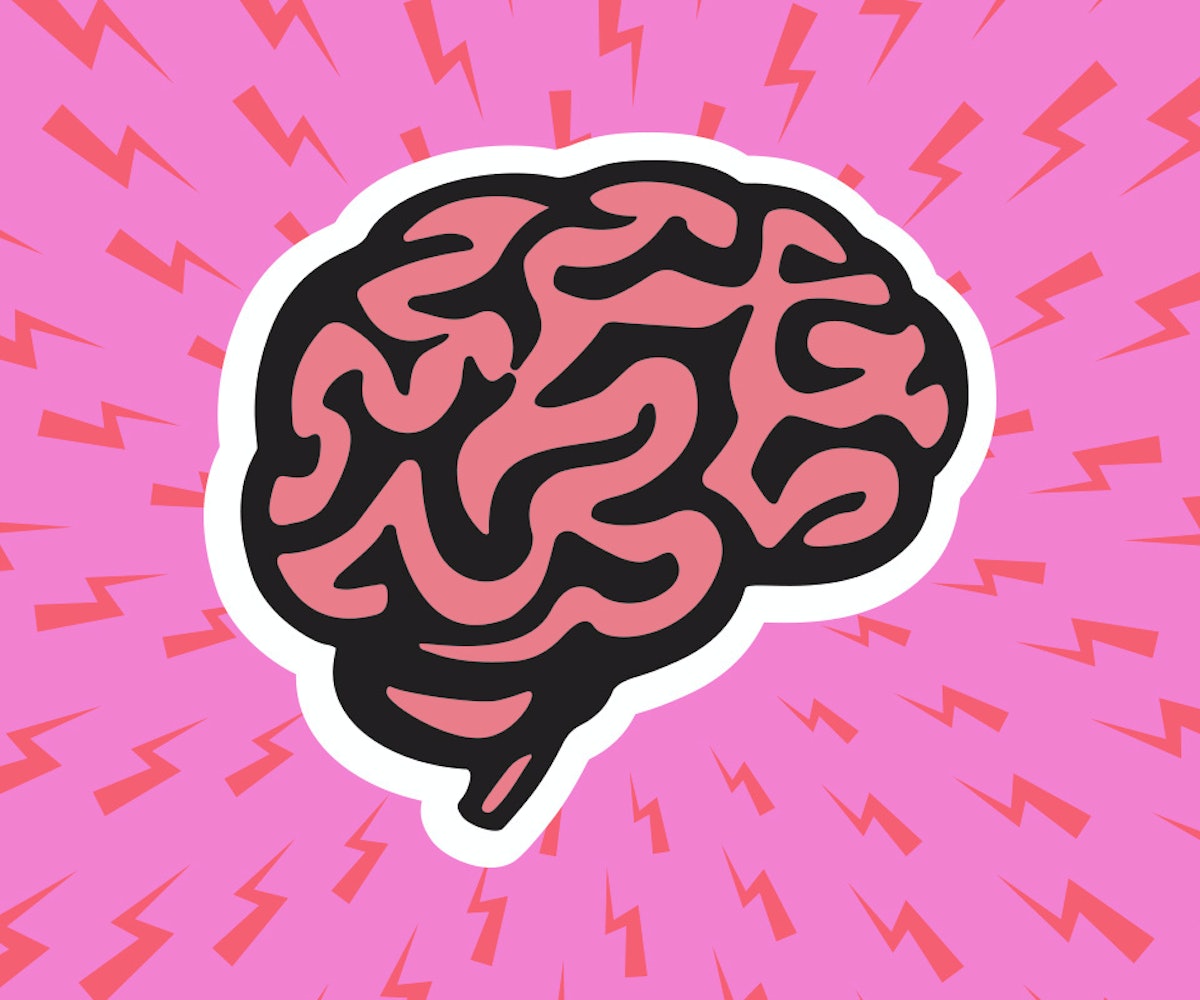 When it comes to the world of wellness, it seems as if there's always some buzzy new ingredient, new practice, or new something that sparks everyone's collective interest. While it's clear that CBD was the trendiest ingredient of the last year or so, popping up everywhere from ingestible supplements to skin care, it looks like there's something that might knock it from its lofty perch: nootropics.

Jen Batchelor, the founder of Kin, a beverage formulated with a blend of nootropics, adaptogens, and botanicals, says, "'Nootropics' is a word used to denote any substance that is proven to enhance cognition in the immediate and long term without the nasty side effects of your household psychotropic—looking at you, Adderall."

She goes on to explain that the term "nootropics" was first coined by Dr. Corneliu Giurgea around 50 years ago and that there are five criteria for what constitutes a nootropic. All nootropics must: enhance memory and learning capacity, help the brain function under extenuating circumstances such as stress, protect the brain from chemical or physical assaults, increase the efficacy of neural circuit function (or how the brain fires commands), and possess few or no side effects (that's why substances like Adderall don't make the nootropics-cut).

In laymen's terms? "I would explain them simply as compounds that support, or sometimes even directly enhance, cognition and executive brain function," Batchelor says.

While brain health and function such as memory and focus seem to be the biggest sell of nootropics, according to Dr. Nicole Avena, who has a Ph.D. in neuroscience and psychology, they can also help to improve mood, energy levels, and even manage stress. "Nootropic supplements, along with behavioral changes such as improving sleep and getting enough exercise, can have a positive impact on brain health and well-being," Dr. Avena says. "But, keep in mind that dietary supplements are not intended to diagnose, treat, mitigate, or cure any diseases. Supplements should be used as part of a healthy lifestyle in consultation with your health care provider."

"Nootropic supplements, along with behavioral changes such as improving sleep and getting enough exercise, can have a positive impact on brain health and well-being."

So what kinds of nootropics are out there? Well, a lot. Your morning cup of coffee contains caffeine, which is a type of nootropic. According to Tero Isokauppila, president and founder of Four Sigmatic, a food and beauty brand focusing on functional mushrooms, adaptogens, and superfoods, this is the most well known and common of all nootropics. Other common natural forms of nootropics include panax ginseng, rhodiola rosea, lion's mane mushroom, and cacao.

Dr. Shari Auth, holistic health practitioner and founder of WTHN acupuncture studio and herbal supplements, explains that there is also a wide range of nootropics that are lesser known that naturally occur in our foods and beverages, such as L-theanine in green tea and adaptogens like ashwagandha.

However, there are many more. "There are a myriad of nootropics on the market, everything from herbal nootropics that have been used in many healing modalities such as Ayurvedic tradition, as well as more modern nootropics which are often created in a lab environment," says Gabe Kennedy, co-founder of Plant People.

So, yes, nootropics can be either natural or synthetic, which is something you'd want to look into when researching the right nootropic for you.

There is also a "sketchy" aspect of nootropics, with some nootropics being capable of leading to significant health concerns. "Some call nicotine a nootropic, but I do not recommend anyone start smoking for brain health," says Isokauppila.

Additionally, not all synthetics are created equal. Many brands with supplements are blending natural ingredients with safe, scientific innovation without negative side effects. For example, take The Nue Co.'s Nootro-Focus. "As with most supplements, you can pretty easily divide nootropics into natural or synthetic categories, yet ours doesn't follow such a simple distinction," says Jules Miller, the brand's founder. "We have taken the absolute best of nature—organic lion's mane mushroom, rhodiola, L-theanine, and gingko—and blended it with the best of scientific innovation. The outcome is something that is clinically proven to work, and that is also totally safe."

But then, of course, there is also the ongoing argument about whether or not supplements are beneficial, or whether or not a person should just focus on getting nutrients solely from the food they eat. However, a mix of both can be beneficial; as Kennedy explains:

Food is medicine, and being able to support any regimen with proper nutrition is key to support the efficacy of the product. With that said, there are also cases where supplements are critical. For example, about one-third of the population cannot properly metabolize B vitamins, so a methylated B complex is extraordinarily impactful. I believe that a balance of the two is critical to leading a healthy life. Understanding what you need and supporting your body with those needs through diet and supplements is the best route.

Danielle DuBoise, co-founder of Sakara, which has its own nootropic chocolate supplement, feels similarly. "An abundance of clean, organic, whole, unprocessed food and leafy greens every day will set you up for incredible health and vitality," she says. "However, supplements provide the extra boost we need to keep up with the pace of our busy, modern lives. Food should remain your steady foundation—supplements are just that: supplementary."

Perhaps the biggest appeal of nootropics, though, is it's yet another way for people to feel like they have control over their body in a healthy way. Auth explains that we're in an era where people are looking to take their health into their own hands by way of natural remedies: "Demand for herbal medicine that is safe, natural, non-toxic, and backed by thousands of years of results will continue to grow, so more and more nootropics will definitely enter the market."

But, there is still a lack of knowledge of nootropics, which means that it's really important for consumers to do research before trying a product and not just trust whatever a brand promises. As Miller explains:

I think we're going to see a lot of expansion in this market in the next 18 months, but, as with CBD, whenever a market expands rapidly, there's a lot of misinformation out there. Nootropics have lived on the "shady" side of the supplement industry for a long time—there are endless stories about people self-blending formulas and causing themselves damage. Personally, I'm not that into that level of biohacking, but I do want something that will help me reach my full potential on a daily basis, whilst looking after my brain long-term. Given the lack of regulation and knowledge in this space, it was so important that we were ultra-transparent about our claims and efficacy. From working with clinically studied ingredients to real people feedback trials, we've covered every base.

DuBoise stresses that while nootropics are considered generally safe, everyone is different and that, if you do choose to start taking any sort of nootropic supplement, it's important to first chat with your health care provider, as you would with any other supplement.

Nootropics also won't be for everyone. As Batchelor explains, nootropic products are created for "the betterment of well people." So, if you're taking prescription drugs of any kind, are suffering from chronic illness, mental health concerns, heart or liver problems, or are generally sensitive to supplements, nootropics might not be best or you and should never be taken without the consultation of a doctor. Age can also be a factor, according to Batchelor, who says that because the brain can still be developing into the early 20s, she doesn't recommend Kin to anyone under the age of 24.

So, if you meet all of the criteria (it's a lot!) to try nootropics safely, maybe give it a shot, and see if your brain gets buzzing, or if it's another wellness trend that will be forgotten after everyone moves on to the next star ingredient.