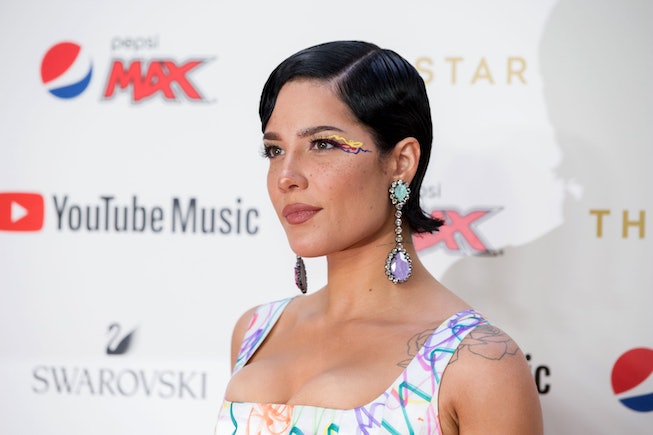 Never one to settle on a hairstyle for long, Halsey is back at it again with a colorful new hairdo. Following a whirlwind few weeks of changes, including a shaved head and a marble dye job, the singer debuted a multicolored, neon wig.

Halsey gave Instagram followers the first look at her wig, posing for a series of selfies on Saturday, December 5. She captured the colorful look from multiple angles, showing off the featured part of her latest beauty routine — a choppy, shoulder-length lob.

The shortened style featured a hint of waviness, but was parted down the middle, and featured swatches of bright coloring. Hues of pink, blue, purple, and green faded seamlessly into one another, giving the illusion of a rainbow-like ombre effect.

In an additional photo of the look, Halsey posed indoors, which gave followers a better glimpse at the full ombre. Her roots were dark green in color, and then transitioned to purple, blue, and pink.

She took a cue from her hair color choices for her makeup, and added a close-up photo of a shimmer-filled beauty routine. Creating a sharp eye wing with blue liner, Halsey sported the same gradient effect on her eyelids, using colorful glitter to transition from a pink to green shade. She capped off the routine with a hint of green sparkle in her inner eye corner.

This isn't the first time Halsey has added a miniature rainbow to her hair. She previously added a rainbow color effect to her part at the 2019 VMAs, and at one point, she turned her bangs into a rainbow.