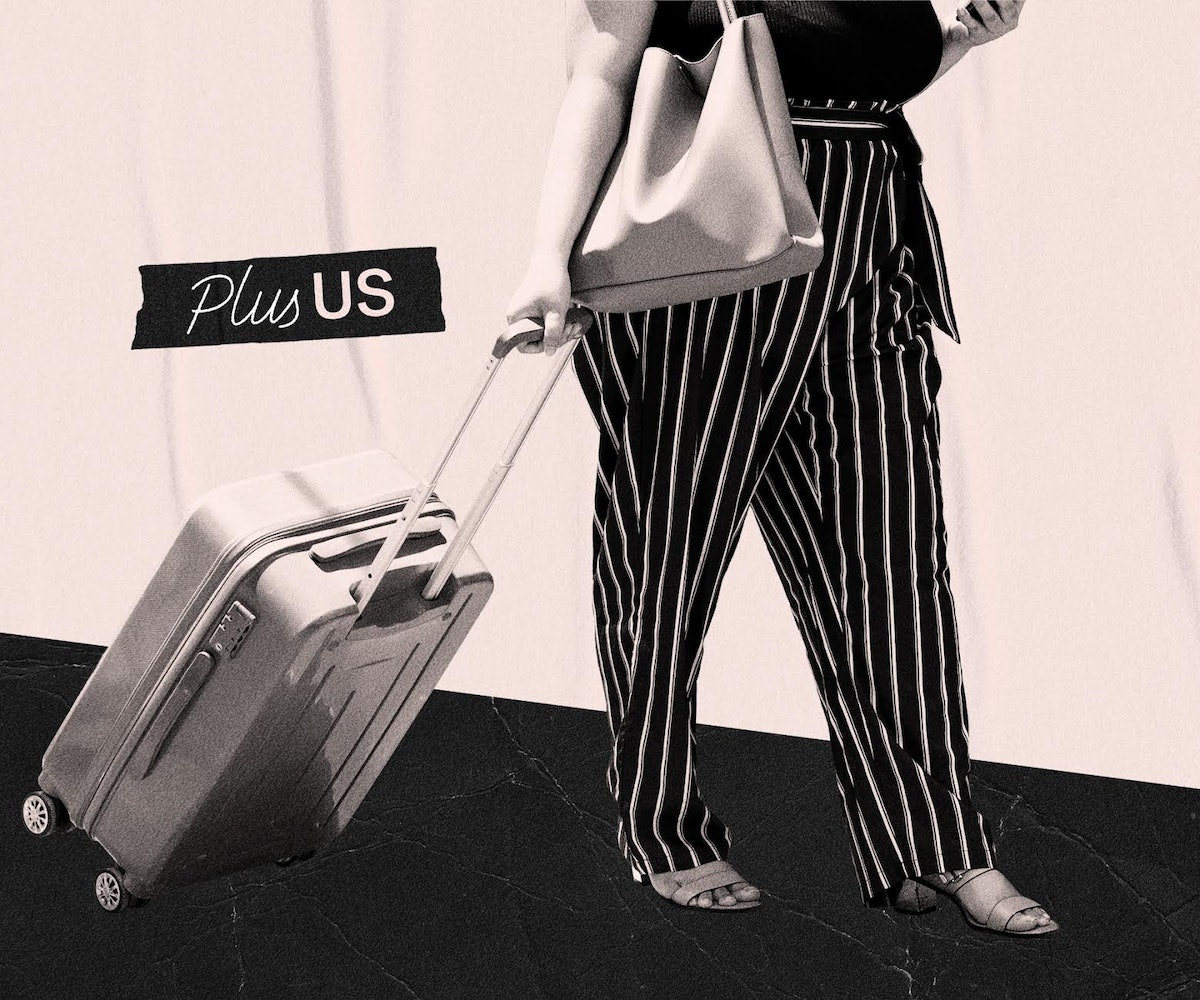 Seated in the plane’s exit row, plus-size model and influencer Natalie Drue realized quickly that her size was “too much” for the passenger to her side. As he began loudly sighing, jerking his arms, and huffing and puffing out of clear disgust and discomfort, she looked down at his phone, only to find a thread of demeaning, fatphobic comments between the passenger and his contact.

“Hopefully she didn't have any Mexican food,” wrote the friend, as Drue’s fellow passenger responded, “I think she ate a Mexican... If the news reports a DFW Airbus A321 leaving the runway without rotating, that would be my flight."

Drue was enduring her first in-flight hater. “I knew I deserved to take up the space that I had purchased, I was fully in my seat, I was not encroaching upon his space whatsoever,” she tells NYLON. Filming it all for social media, including the moment she confronted the man, Drue opened up a public discourse for the struggles of traveling when plus-size.

As travel resumes throughout the United States and internationally, a feeling of joy falls upon those who, after 15 months of isolation, are finally able to enjoy the bliss of much-needed vacations. But for plus-size folk, that bliss is often weighed down by the stress of air travel, and the sheer discomfort that comes with it.

Much like Drue, Dalessandro faced a triggering experience a few years ago. Returning home following a body-positive retreat with an organization called Fat Girls Traveling — ironic, considering what came next — Dalessandro was ignored repeatedly by a flight attendant when asking for a seat belt extender, believing that as the engine roared, she would have to fly without being secured into her seat. As tears ran down her race, fellow passengers rallied around her, demanding the flight attendant offer assistance. But the damage had already been done: Dalessandro knew she was unwelcome.

“All of those anxieties that I have about our bodies being a problem, that we're not supposed to fly, all began flooding my mind in that moment,” Dalessandro says.

Drue adds, “I had flashbacks to knowing how shitty the world can be to navigate as a fat person. How so many of us are mistreated and miss out on opportunities because we are fat. But I wasn't going to let him make me feel bad for existing.”

Plane travel is often a reminder that the world at large is not designed to embrace or even acknowledge the existence of fat folk. As plane seats and legroom get increasingly smaller while Americans get statistically bigger, the possibility increases for uncomfortable situations like those of Drue and Dalessandro.

“The average size in the U.K. and the U.S. based on waist size is not catered to in terms of the average seat size for a plane,” says Kirsty Leanne, a plus-size travel blogger. “I think that it's all about money for them. They think more seats means more money, when really in my head, accommodating more people means more people flying with you.”

The conversation intensified recently when a 2019 advisory from the Federal Aviation Administration began recirculating, in which the organization recommended the weighing of passengers to determine “balance control” on board. According to the Washington Post, however, airlines are not on board with the recommendation, opting to just use average weights of passengers based on government health surveys instead. Seeing as the recommendation is now two years old, it’s likely that such a practice will not take place in the near future.

However, it raises an important question: As the FAA has now spoken it into existence, could plane travel get even worse for plus-size folk?

It is, of course, a possibility, and more so it serves as a reminder of the obstacles we must endure to be accepted in a world that refuses to acknowledge our presence. Plane travel is aggravating to begin with. Especially in the midst of the pandemic, tensions and emotions are high, and being crammed into a small vessel with strangers intensifies those feelings.

Squeezing through the aisles with your bags, that uncomfortable feeling of needing to ask for a seat belt extender, the annoyance of those around you —there’s a whole lot to navigate. But here are the tips to get you through it, as much as can be anticipated.

First off, if possible, opt for Southwest Airlines, which offers a “Customer of Size” policy. This allows you to purchase the seat next to you, allowing for extra room, then to be refunded for the price of it post-flight. Those unable to afford doing so can arrive at the airport a few hours early and ask to utilize the policy. If space on the aircraft is available, they will enact the policy free of charge for you.

Second, don’t be afraid to ask for a seat belt extender. If you’re feeling uncomfortable, do so before boarding the aircraft — that way, the flight attendant is aware of your needs. Some seat belt extenders can be purchased online beforehand. However, the legalities and functionality of these vary from airline to airline, so it is best to research it extensively before boarding.

Additionally, Drue recommends pre-boarding. Doing so will allow you to get comfortable and receive an extender without the worry of having to squeeze through others and cause a ruckus should an issue arise.

Lastly, be vocal, even when it feels difficult to do so.

“I'm fine being upfront and being like, I'm not offended if you want to move,” Dalessandro says. “I'm uncomfortable, you’re uncomfortable. Let's just acknowledge it. And that kind of clears the air because it's good to just be upfront.”

Drue adds, “It’s my comfort and I value my comfort over somebody else thinking that I’m fat. At this point, who cares? I'm obviously physically fat. These are tools that are available to me, and I'm going to use them.”

NEXT UP
Culture
Scream 6 Trailer Brings The Nightmare To New York
Nylon Nights
How Renzo Rosso Turned The Pelican Hotel Into A Miami Must-Stay
Entertainment
Meet Andreas Metaxa, The Man Behind The Miami Jet-Setting Memes Of Supersnake
Entertainment
Samia On 'Honey' & Saying The Ugly Part Out Loud
Style + Culture, delivered straight to your inbox.