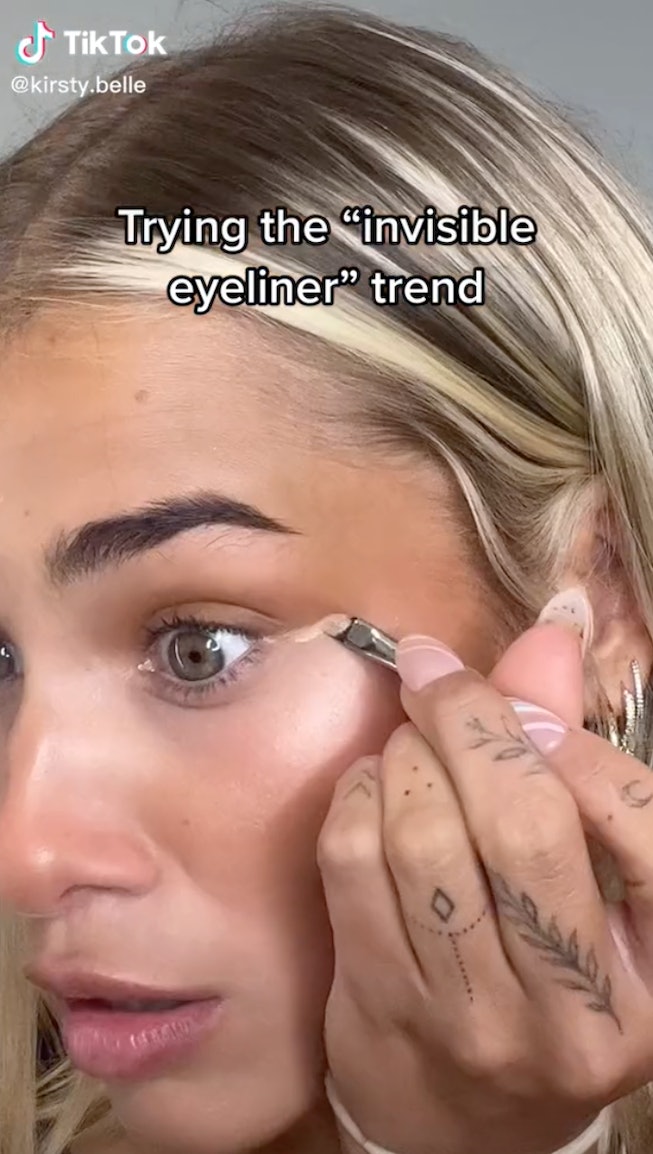 There are a number of makeup hacks on social media that have gone viral over the past few years, designed to help you perfect the tricky art of winged eyeliner (including using tape). However, TikTok’s latest eyeliner trend asks, what if the eyeliner in question was instead invisible? Flipping the script on a traditional cat eye, “invisible eyeliner” or “transparent eyeliner” has been trending on the app since May, when creator May Akhtar posted a makeup tutorial using concealer as an outline for her lash line. Now, invisible eyeliner is getting a second wind of virality, rising in the ranks of must-try trends for 2023.

Makeup creator @wahmeko was one of the many content makers that have jumped onto the invisible eyeliner trend. Posting a short tutorial on her TikTok, she created an illusion of a dark line by using light concealer around the edges of a cat eye shape. Her followers were a fan of the look, weighing in that it made them feel less self-conscious about having “dark eyelids”. “My dark eyelids are finally useful,” commented one person. “I be using my darker lids as eyeshadow tbh, I used to hate em but I lowkey love it now,” commented another. “Omg discoloration eyeliner finally a trend I can do 😍,” wrote another.

While the trend clearly appeals to those that have discoloration or hyperpigmentation around their eyelids, it’s also a way for makeup minimalists to join in on the cat eye eyeliner trend without fully committing to heavy black liner. Color theory suggests that dark colors around the eyes can make them look smaller, so by contrast, the concealer as a lighter eyeliner creates an eye-opening and lifting effect around the eyes. In its subtly, there’s also an allure in wearing an eye makeup style that requires a closer look to see and appreciate it completely.

Invisible eyeliner is just one of the negative space makeup trends that have taken off recently. As part of the “Euphoria effect”, negative space eyeliner and cut crease eyeshadow is also trending on the TikTok app. As creators get more creative with creating dynamic shapes using negative space online, we’ll be staying tuned for more “invisible” makeup illusions.