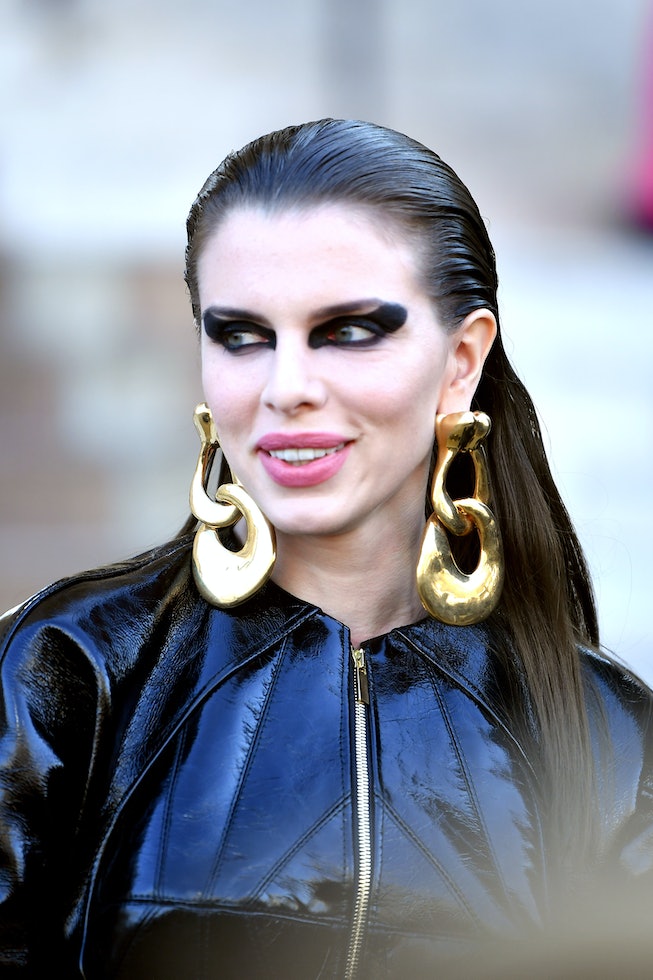 In recent weeks, you’d have to go out of your way to avoid hearing the buzz about Julia Fox. The Uncut Gems star broke the internet with Kanye West on January 6th when their first Interview Magazine photoshoot came out accompanied by a piece Fox wrote on their dating life called Date Night, only six days after their initial meeting on New Year’s Eve. They’ve since done another shoot with the publication and Fox even spoke about the relationship on Friday's episode of her Forbidden Fruits podcast, saying she “really couldn't care” about the attention she’s been getting from dating West after his separation from Kim Kardashian.

While people have had a lot of thoughts on the budding relationship, this week it’s been Fox’s new style that has the world talking. While at Paris Fashion Week, the pair have been spotted wearing matching denim and leather outfits already, but it’s been her dark eye makeup that has been most discussed and polarizing. She’s been wearing a heavy, inky black, smokey exaggerated cat eye for many of her public appearances. As a partial explanation, today Fox revealed that West might have had a hand in creating the makeup look. She posted “wanna know who my fav makeup artist is?” to her Instagram stories with a photo of West doing winged eyeshadow that extends all the way to her hairline.

While graphic eyeshadow and goth eyeliner has been recently trending, Fox’s makeup takes it to a new level and it is dividing the internet. “This is mean but, does Julia Fox do her own makeup or something?” one person Tweeted. The editorial look is, for many people on the internet, too aggressive for the day time. But, we know for one, at least makeup artist Pat McGrath approves. The Mother of Makeup herself took credit as the original designer behind the “luxe look”. As it turns out, you can recreate the dramatic eye look using the Pat McGrath Labs PermaGel Ultra Glide Pencil in Xtreme Black, Perma Precision Liquid Eyeliner, and FetishEYES Mascara.

Love it or hate it, like Julia Fox and Kanye West’s entire relationship, her styling, and makeup choices are getting everyone talking. It’s also fast-tracking us to an era of even bolder eye makeup. Keeping her hair and the rest of her makeup minimal, Fox attended the Schiaparelli show where models also had emo-inspired eyes caked in kohl (both along the crease and under the lash line), confirming the upcoming trend. Starting from the inner corner of her eye as well as in the waterline, Fox’s winged looks are serving us as much drama are her current personal life. It might be time for us all to start taking our winged eyeliner to the next level.